Comments (0)
Add to wishlistDelete from wishlist
Cite this document
Summary
Bramlett. The Edict of Nantes is a law that was signed by King Henry IV in 1598. The law reinstated the freedom of worship back to all Protestants present in France during that period. The edict principally just…
Download full paperFile format: .doc, available for editing
HIDE THIS PAPERGRAB THE BEST PAPER91.2% of users find it useful 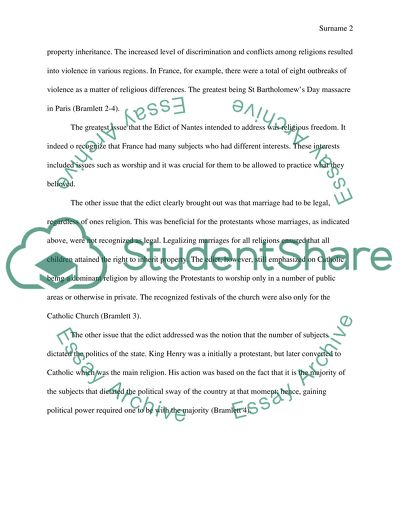 Edict of Nantes The source for this topic is the internet, Eurodocs, by M. Bramlett. The Edict of Nantes is a law that was signed by King Henry IV in 1598. The law reinstated the freedom of worship back to all Protestants present in France during that period. The edict principally just recognized the French Protestants and their religious beliefs. It sought to acknowledge that indeed, King Henry’s subjects had varying interests and there was no need to persecute those who did not share the same interests as his. The edict, therefore, ended the wars of religion (Bramlett 1).
The primary source indicates that during this time period, religion was prevalent and almost all France citizens and residents could identify with some sort of religious belief. The edict was basically addressing religious issues. The law outlines that during this time period, Catholic was the recognized religion, with most of the French practicing or being expected to practice Catholic as a religion, as provided by the edicts and statues.
The Edict of Nantes also brought out the fact that identifying with a particluar religion was a cause for religious discrimination. The Protestants were not permitted to worship freely and in public. In addition, it shows that during this time period, the government was biased and did not serve its subject as equals. Apart from denying them their religious freedom, the government did not recognize protestant marriages and termed them as illegal leaving the children to be branded as illegitimate. This, therefore, was a hindrance to property rights and property inheritance. The increased level of discrimination and conflicts among religions resulted into violence in various regions. In France, for example, there were a total of eight outbreaks of violence as a matter of religious differences. The greatest being St Bartholomew’s Day massacre in Paris (Bramlett 2-4).
The greatest issue that the Edict of Nantes intended to address was religious freedom. It indeed o recognize that France had many subjects who had different interests. These interests included issues such as worship and it was crucial for them to be allowed to practice what they believed.
The other issue that the edict clearly brought out was that marriage had to be legal, regardless of ones religion. This was beneficial for the protestants whose marriages, as indicated above, were not recognized as legal. Legalizing marriages for all religions ensured that all children attained the right to inherit property. The edict, however, still emphasized on Catholic being a dominant religion by allowing the Protestants to worship only in a number of public areas or otherwise in private. The recognized festivals of the church were also only for the Catholic Church (Bramlett 3).
The other issue that the edict addressed was the notion that the number of subjects dictated the politics of the state. King Henry was a initially a protestant, but later converted to Catholic which was the main religion. His action was based on the fact that it is the majority of the subjects that dictated the political sway of the country at that moment; hence, gaining political power required one to be with the majority (Bramlett 4).
Works Cited
Bramlett, M. n.d. Henry IV, Edict of Nantes (1598). Web. March 18 2014. Read More
Share:
Tags
Cite this document
(“History short paper Essay Example | Topics and Well Written Essays - 500 words”, n.d.)
History short paper Essay Example | Topics and Well Written Essays - 500 words. Retrieved from https://studentshare.org/history/1634347-history-short-paper

For this paper, you will be engaging in a short oral history project involving data collection, analysis and presentation

...? Oral History – JFK Assassination The Event: On Friday, November 22, 1963 President John F. Kennedy was assassinated as his motorcade traveled through Dallas Texas. Starter Questions: 1. Do you remember the JFK assassination? 2. How did you hear about it? 3. What were you doing when you heard about it? 4. How did you react to the news? 5. Did you see in real time the killing of Lee Harvey Oswald (by Jack Ruby)? 6. Did you believe the single assassin theory released by the “Warren Commission”? Subjects Interviewed: A. David Katz – 66 year old Chief Financial Officer B. Beatrice Zigo – 71 year old retired assembly worker C. Mary Costa – 86 year old administrator D. Muriel Auerbach – 56 year old bookkeeper Analysis of the...
3 Pages(750 words)Speech or Presentation

... “The Necklace The Necklace” is Guy de Maupassant’s most popular short story. It is a ‘tale with a twist,’ and the surprise ending has a powerful impact on the reader. Madame Loisel is the protagonist of the story. She borrows a diamond necklace from a friend and loses it. Madame Loisel’s husband uses his savings and incurs heavy debt in order to replace the necklace. The Loisels go through a decade of penury and struggle to pay off their debt. At the end of this period, Madame Loisel learns that the necklace was only a piece of imitation jewelry. “The Necklace” relates Mathilde’s attitude towards life and her struggle to face the consequences of her actions. The character of Madame Loisel, and its appeal to the reader, undergoes dramatic...
4 Pages(1000 words)Essay

Short paper on American history (to 1877)

.... (The American Revolution) In answer colonies started to organize their military against British acts and soon after war broke out within the states. This war is a important bench mark in the history of American Independence and is known as revolutionary war. Even though many colonies decided to stay away from the war and sent repeated pleas to the British parliament yet the British king declared the 13 Colonies “In rebellion” and traitor. By 1776 these colonies on their own cast votes in second continental congress and adopted declaration of independence. Furthermore, U.S.A along with, with French, Spain and United provinces defeated Britain in 1777 at Saratoga. This made French have open alliance with U.S.A. later to...
2 Pages(500 words)Assignment

...ORDER No: 442637 Event Implementation Running Head: SPORT EVENT MANAGEMENT The Key Components of Sport Event Implementation First & Last Names Affiliation Event Implementation 2 The Key Components of Sport Implementation Introduction An interview with Susan Radcliffe (2010) covered the essential components which the subject believed to be essential factors of a successful sport event. These included the importance of brand creation, finances [sponsorship], marketing and communication. Also vital components were the qualities and drive of the event organiser, the importance of assistance from local, national and international agencies, and the choice of venue. These factors were then compared with the particular... No: 442637...
2 Pages(500 words)Essay

Peer review for one PPT and a short paper

...the possible differences between original and exclusive series. It would help to also provide estimates of audience percentage to know if which among the originals and exclusive series are doing better. The presentation can also expand on the future plans of Hulu. It will be interesting to know where they plan to expand and their future projects and programs. Comments on short paper that discussed Hulu: I liked that the paper provided a short history of Hulu because it provides information on its initial partners and development. It is exciting to know that Hulu attracted a number of large multinational companies as distribution partners. Hulu must have...
1 Pages(250 words)Book Report/Review

...of the conference led to the division of Africa in to 50 countries. The prime purpose of the paper is to provide brief history of the South Africa and after effect of colonialism on economic, political, culture and social structure. Discussion The request of German Chancellor and Portugal is to call the chief westerns powers to end confusion and negotiate questions about the issue of control of Africa. African continent was dominated by the colonial powers which superimposed their realms for the sake of expanding influence over Africa. The forces of the penetration of merchant capital and rise of an African merchant undermined the presence of past systems of dominance over African societies and prevented...
5 Pages(1250 words)Essay

.... This paper examines a specific institutional setting, where a student who is from a different race is discriminated based on the skin color. It will also outline an example of a student from United Arab Emirates who is studying in the University of Arizona. Exploring institutional racism Racism can be manifested through stereotypes, prejudice or through discrimination. However, while institutional racism is based on stereotypes and prejudice, it is mainly expressed through discrimination. Racism is dominant in the American society through social institutions such as University of Arizona. American institutions are in most cases oriented to white, Anglo-Saxon, Protestant values and its associated lifestyle. The...
1 Pages(250 words)Coursework

Introduction to the Combinational Logic Circuit

6 Pages(1500 words)Lab Report
sponsored ads
Save Your Time for More Important Things
Let us write or edit the essay on your topic "History short paper" with a personal 20% discount.
GRAB THE BEST PAPER

Let us find you another Essay on topic History short paper for FREE!