Comments (0)
Add to wishlistDelete from wishlist
Cite this document
Summary
This is because power and authority are two critical concepts that define the political organization of any given country. In the United States, state governments share power with the federal government within a…
Download full paperFile format: .doc, available for editing
HIDE THIS PAPERGRAB THE BEST PAPER92.4% of users find it useful 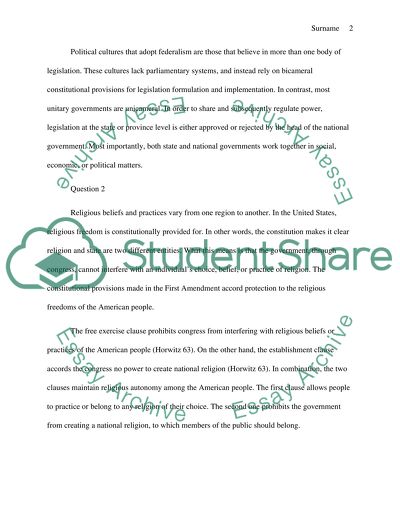 Government Question The role of the government is fundamental in the societal setting. This is because power and authority are two critical concepts that define the political organization of any given country. In the United States, state governments share power with the federal government within a political framework known as the American federal system. A federal system provides for a political order within which states or provinces govern the country alongside the national government (Welch, John, Susan, and Sue 68). This type of collaboration in government constitutes a political federation, such as that observed in the United States.
In contrast, unitary governance system is characteristic of power centralization. Instead of having independent states or provinces, as it is the case in the United States, a unitary system functions based on subnational units. Critical to note is that these subnational units are subject to the influence of the central government. In this respect, the central authority governs local governments under the unitary system. Great Britain and France are good examples of governments that practice the unitary system. While national and state governments share power under federalism, the central government decentralizes or delegates power to subnational units under the unitary form of government (Lansford 44).
Political cultures that adopt federalism are those that believe in more than one body of legislation. These cultures lack parliamentary systems, and instead rely on bicameral constitutional provisions for legislation formulation and implementation. In contrast, most unitary governments are unicameral. In order to share and subsequently regulate power, legislation at the state or province level is either approved or rejected by the head of the national government. Most importantly, both state and national governments work together in social, economic, or political matters.
Question 2
Religious beliefs and practices vary from one region to another. In the United States, religious freedom is constitutionally provided for. In other words, the constitution makes it clear religion and state are two different entities. What this means is that the government, through congress, cannot interfere with an individual’s choice, belief, or practice of religion. The constitutional provisions made in the First Amendment accord protection to the religious freedoms of the American people.
The free exercise clause prohibits congress from interfering with religious beliefs or practices of the American people (Horwitz 63). On the other hand, the establishment clause accords the congress no power to create national religion (Horwitz 63). In combination, the two clauses maintain religious autonomy among the American people. The first clause allows people to practice or belong to any religion of their choice. The second one prohibits the government from creating a national religion, to which members of the public should belong.
The wall of separation between the church and the state elicits controversies from time to time. In terms of establishment, religions that violate polygamy laws and sex with minors emerge from time to time. These practices become the center of controversy because the free exercise clause work in support of such religious beliefs. These controversies are often resolved using the violated non-religious laws. Moreover, cults and mobster activities have been linked to the free exercise of religion, prompting criminal actions against perpetrators.
Works Cited
Horwitz, Paul. First Amendment Institutions. Cambridge, MA: Harvard University Press, 2012. Print.
Lansford, Tom. Democracy. Singapore: Marshall Cavendish, 2007. Print.
Welch, Susan, John Gruhl, Susan Rigdon, and Sue Thomas. Understanding American Government. New York: Cengage Learning, 2011. Print. Read More
Share:
Tags
Cite this document
(“Government Essay Example | Topics and Well Written Essays - 500 words - 3”, n.d.)
Retrieved from https://studentshare.org/history/1631107-government

...The Structure and Function of the County governments in US Local government in the US assumes many forms. The most common include counties, townships, municipalities and special districts. These smaller units of local government serve most people in different capacities including education, water, sewage, sanitation, fire, and police protection. The local governments are independent of the state that established them. The state has powers over them and can abolish them if the need arises (Paul 25). In the US, the county is normally considered as the largest political subdivision of a state. The county government is found almost in all state except...
1 Pages(250 words)Essay

...is possible. This would help the already incurred heavy losses in the form of 1 trillion plus U.S dollars. It will have positive impact on the different variables and factors associated with the annual budget and the normal living standard of the common American citizens. The possible slash on the forestry along with the domestic airports working is believed to help the economy by over 1 billion dollars. These two domains will help overcoming the deficit faced by government. Although their impact might not be as staggeringly high as the defense industry, yet they will contribute in a reasonable way and may set precedence for cutting on spendings in the domestic industry with regard to other items and other services...
2 Pages(500 words)Essay