A Great Impact on the Muslim Empire - Research Paper Example

Comments (0)
Add to wishlistDelete from wishlist
Cite this document
Summary
The paper describes the customs of Arabs. Many battles such as Battle of Badr, Battle of Uhud took place which gave a lot of power to the Muslims. The Prophet (PBUH) laid his life as an example for all the Muslims to follow. After his death, many false prophets stood up to rebel…
Download full paperFile format: .doc, available for editing
HIDE THIS PAPERGRAB THE BEST PAPER96.4% of users find it useful 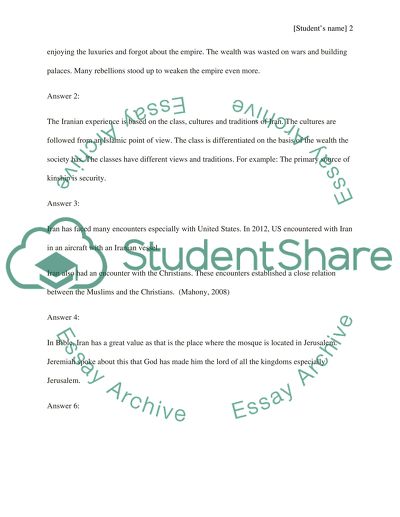 Extract of sample "A Great Impact on the Muslim Empire"

number Answer 1A: 7th century is the stage at which Islam took a new turn and changed the customs of Arabs. It all began when Prophet Mohammad (pbuh) received a revelation in cave Hira. That was the time when the period of revelations began. The Prophet (pbuh) spread and taught Islam to the whole of Arab. Many battles such as Battle of Badr, Battle of Uhad took place which gave a lot of power to the Muslims. The Prophet (pbuh) laid his life as an example for all the Muslims to follow. After his death, many false prophets stood up to rebel. These were smartly dealt by Prophet’s (pbuh) companions namely Hazrat Abu Bakr and Hazrat Umar. The caliphate period also started in this century. In this century Hazrat Ali and his sons were martyred. That was the point when shiism came into being when the opponents regret the martyrdom. The 8th century was known as the golden period of Islam. It’s when Islam gained its roots in the major countries. Many mosques were built; mathematicians were there to invent new solutions such as algebra.
Answer 1C:
The Mongol invasions left a great impact on the Muslim empire. At first it brought glorious days when Babur and Akbar were the rulers but then it declined drastically because they started enjoying the luxuries and forgot about the empire. The wealth was wasted on wars and building palaces. Many rebellions stood up to weaken the empire even more.
Answer 2:
The Iranian experience is based on the class, cultures and traditions of Iran. The cultures are followed from an Islamic point of view. The class is differentiated on the basis of the wealth the society has. The classes have different views and traditions. For example: The primary source of kinship is security.
Answer 3:
Iran has faced many encounters especially with United States. In 2012, US encountered with Iran in an aircraft with an Iranian vessel.
Iran also had an encounter with the Christians. These encounters established a close relation between the Muslims and the Christians. (Mahony, 2008)
Answer 4:
In Bible, Iran has a great value as that is the place where the mosque is located in Jerusalem. Jeremiah spoke about this that God has made him the lord of all the kingdoms especially Jerusalem.
Answer 6:
Zoroastrianism is the pre-Islamic religion which emerged in Iran (previously known as Persia) and established its roots in India. The followers believe in one invisible God and one sacred book. Their beliefs are laid upon the monotheistic and dualistic features.
Work Cited
Mahony, A. (2008). Christian responses to Islam: Muslim-Christian relations in the modern world. Manchester: Manchester University Press. Read More
Share:
Tags
Cite this document
(“Essay questions Example | Topics and Well Written Essays - 500 words - 15”, n.d.)
Essay questions Example | Topics and Well Written Essays - 500 words - 15. Retrieved from https://studentshare.org/history/1627952-essay-questions

CHECK THESE SAMPLES OF A Great Impact on the Muslim Empire

...and the Institutes, a textbook for lawyers. These books and codes were largely accepted in the East but failed to make substantial impact in the west and thus contributed to the divide which has started to rise. Justinian ambitiously tried to reconquer all the Western lands that Rome had lost to the barbarians. Justinian became the emperor in 527 and ruled until 565 and proved him to be an able ruler and he was in fact responsible for the rise of the Byzantine Empire and gave Eastern Rome a separate identity. It was his great reign which is considered to be the birth of the Byzantine Empire. Justinian successfully reconquered much of the territory that had fallen into...
3 Pages(750 words)Essay

... The Al Andalus is derived from the historical fact that Al Andalus was once called Vandalus, meaning “the land of vandals”. It was d after the Vandals who were first settled here but later moved to other parts of Europe (Flow of History, 2007). Vandalus was pronounced more like “wandalus” at that time thus when the Muslims first arrived in this region they spoke Arabic , in classical Arabic "wa" can be replaced with the letter alif (w/hamza) Hence it ended up in Al Andalus keeping the same meaning to it. Al Andalus refers to the Muslim empire in Spain (former name Hispania) and includes the cities of Almeria, Malaga, Cadiz, Huelva, Seville, Cordoba, Jaen and Granada. HISTORY In 711 AD, the Christian chief Julian went and appealed... to the...
12 Pages(3000 words)Research Paper

...? Muslim Women Affiliation) On the greatest of forums of religion and theology, Islam has often been criticised for delivering unequal rights to the genders; women being given less than that to men, and it is also frequent that various scholars have advocated for and against the issue. It is a matter of worthy attention that throughout the last fourteen centuries of Islamic law in this world, the issue of women rights and inequality with regards to society, politics and cultures as compared to the opposite gender has been a constant target of numerous media dialogues. The cause of this constant criticism is not difficult to notice; the issue remains intact even in the presence of defiant or defensive responses from...
4 Pages(1000 words)Essay

...remained in the country by accepting Christianity (Cohen 83). The converts’ descendants were also expelled from the Spain in 1609. In addition, the Muslim World lost the Alhambra palace, a beautiful Islamic architecture, as a result of the surrender of the Granada. In short, the fall of Granada was a marked loss in the history of the Muslim World. Fall of Constantinople The fall of Constantinople was the capture of the Constantinople city by the Ottoman Empire under the leadership of the 21 year old Ottoman Sultan Mehmed II. This siege was against the army led by the Byzantine Emperor Constantine XI Palaiologos. Since Constantinople was the capital of the Byzantine...
8 Pages(2000 words)Essay

...As the Muslim World enters the twenty-first century, controversies over the meaning of the Quran and the methods for its interpretation grow in intensity. Many have claimed that the Quran needs to be interpreted from a novel, and modern perspective which is more consistent with the structure and pattern of lifestyles in modern world. This group has advocated the re-interpretation of the Quran for greater harmony with the twenty-first century. Others, however, have argued the impossibility of interpreting the Quran, the very heart and core of Islam, in any way intended to satisfy a predetermined objective. In other words, Muslims are not at liberty to re-interpret the meaning of the Quran in order to...
4 Pages(1000 words)Essay

...concerned about the role of religion whether it's supposed to oppress or it for freedom (Maqsood 2008). The subject being somehow contentious many people will be obligated to participate. Conclusion Many Muslim women lead desperate lives and have to remain contended with such treatment as they perceive it is sacred to do so and rebelling will be a show of disrespect to the prophet. However elite families from the west now educate their women in Europe, American and across Asia. The experience of the feminist ideas from the west is having a very great impact on the Muslim women and its spreading very fast bringing out a change that will be felt if women get equal...
4 Pages(1000 words)Essay

...for me was the racial taste of the story. The author has fundamentally tried to portray a Muslim family. Names of the characters are Muslim. A family wherein brothers abhor each other, and illegitimate physical relationships are common is least predictable of an Islamic culture. I would have liked the story more had it not had been indicative of a particular religion. What I liked about the story was the fact that the jealousy between Omar and Yaqub is ultimately offset by their mother’s love. Despite all the differences and the jealousies that the characters cultivate, they still show respect for their parents. From reading this book, I have learnt the way cultural shock affects the ideologies,...
1 Pages(250 words)Essay

...Nermin S. Sabry & Katherine R. Bruna. (2007). Learning from the Experience of Muslim in American Schools: Towards a Proactive Model of School-Community Cooperation. Iowa: Multicultural Perspectives, 9(3), 44–50 These article talks about the challenges faced by young Muslims studying in US, these challenges are normally fueled through misinformation about Islamic teachings propagated through the press, international media and preconceived biased minds. One example that supports what the article is talking about is a concern raised by a Muslim student in US. A social studies teacher once said in classroom when he was teaching about the Middle East that the region is of peace heaters, this...
1 Pages(250 words)Annotated Bibliography

Britain and the empire The Great Irish Famine

...Number] The Great Irish Famine The Great Irish Famine: Impact, Ideology, and Rebellion is written by Christine Kinealy and was published by Palgrave Macmillan in 2001. The potato famine in 1845-51 was an event which was a turning point in the development of Ireland. The crisis was a miserable one which greatly impacted all aspects of Irish life. The book focuses on the major historical events that took place at that time but it does not only give a general history of the events but also explores the aspects that have received lesser attention such as rise in crime rates, role of religion, political consequences, food export controversy, the rebellion, and the...
9 Pages(2250 words)Essay

...of religion, prayer as a therapy and understanding different religious practices with a bias on the Islamist’s Salat practices. Most people believe that faith is the greatest component of any religion. This goes hand in hand with prayer. This is why when people pray, they must inject some elements of faith into the payers so that it can have an impact on their lives. This is perhaps why there are many religious doctrines across the world. Today, even scientists accept the therapeutic healing of prayers. Mary notes that it looks at prayer as a way of achieving the end with their creator, then they will receive healing in ways that that they cannot understand. In this regard, prayer backed with faith has a beneficial...
6 Pages(1500 words)Essay
sponsored ads
Save Your Time for More Important Things
Let us write or edit the research paper on your topic "A Great Impact on the Muslim Empire" with a personal 20% discount.
GRAB THE BEST PAPER

Let us find you another Research Paper on topic A Great Impact on the Muslim Empire for FREE!