Comments (0)
Add to wishlistDelete from wishlist
Cite this document
Summary
The paper “Colonialism and South Asia” evaluates the Indian subcontinent which remained a colony of Great Britain between the 17th and 20th centuries. It saw major upheavals and resistances from the locals. One of those resistances and moves came about in the form of a non-co operation movement…
Download full paperFile format: .doc, available for editing
HIDE THIS PAPERGRAB THE BEST PAPER94.3% of users find it useful 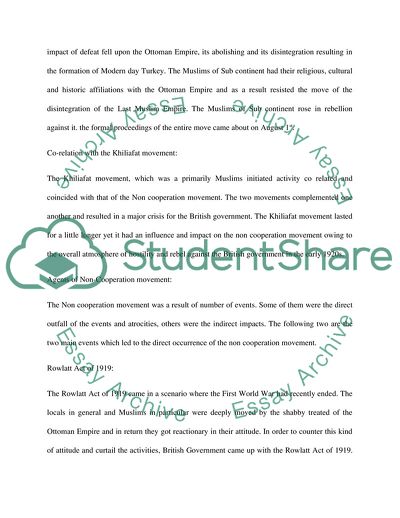 Download file to see previous pages The intensity of the overall activity can be judged from the fact that Mahatma Gandhi termed the non-cooperation movement as the Indian Freedom movement
While it was formally initiated by Congress and Mahatma Gandhi, the Muslims rose to the occasion and joined it owing to their grievances with reference to the shabby treatment meted with the Ottoman Empire and the Porte of Turkey. Under the rules set forth, the locals decided to protest against the occupation of Britain in a manner that would force them changing their attitude. It was meant to be non-violent, yet there were a number of activities and actions that led to the violent outlook of the non-cooperation movement.
From the Muslims perspective, the non-cooperation movement came about in the background of the situation and circumstances related to World War One. In the First World War, Great Britain went against Ottoman Empire, and the Ottoman Empire herself had parted with The Germans, Since Germans were defeated, the Ottoman Empire tasted a subsequent defeat, the impact of defeat fell upon the Ottoman Empire, it is abolishing and its disintegration resulting in the formation of modern-day Turkey. The Muslims of Subcontinent had their religious, cultural and historical affiliations with the Ottoman Empire and as a result, resisted the move of the disintegration of the Last Muslim Empire. The Muslims of Subcontinent rose in rebellion against it. the formal proceedings of the entire move came about on August 1st.

CHECK THESE SAMPLES OF Colonialism and South Asia

How does the experience of colonialism and post-colonial migration, diaspora, racism, exclusion and marginalisation affect the c

.... The reality is that colonialism affected the colonised masses in more ways than could have been imagined. This is particularly evident among the African peoples who were colonised and enslaved- in the case of African Americans. The Effects of Colonialism Colonialism enforced the powerful ideology of the existence of racially inferior and superior tribes through its operations in Oceania, Africa, Asia, and the Americas. All over the world today, there is a lot of conflict that is taking place in the nations that were colonised by Western European nations. According to Meredith (2005), many scholars believe that these conflicts are mostly the result of colonial policies that established territorial boundaries, the unfair treatment of native...
7 Pages(1750 words)Essay

In what ways do colonialist ideas continue to influence contemporary culture Describe with reference to fashion, literature, fi

Africa is the country which has suffered most from colonization and this could be due to its vast natural resources and cheap labor. White men have colonized many parts of the world and have lived there more than a century. Colonization means losing sovereignty from the indigenous people to the foreigners. They dominate the cultural, social, spiritual, economic, political and psychological ways of indigenous people. Violence and enforcement has always been a part of colonization. These colonized people lived in different countries like India, African continent, America, Spain, Philippines and Portugal. This gives chance for lot of amalgamation of culture. Since the colonized Europeans live in these regions for a longer period the...
8 Pages(2000 words)Essay

...Tide Ad and Its Indian Sentiment Introduction From its humble beginnings, India has now risen in the global arena. Today, India is known as an information technology hub, the top player in global business process outsourcing, the source of migrant doctors and lawyers, and as an exotic tourist destination. Amidst all these technological and economic developments, India is still stuck with its tradition and culture. It should be noted that the life of the Indians hugely revolved around their religions such as Islam, Hinduism, and Buddhism. This paper will look at the general perception of people on India as portrayed in the Tide advertisement. Tide and India Tide is a detergent manufactured by an American company. The product... Ad and Its...
2 Pages(500 words)Essay

Lastly, it is also crucial that the geo strategic essentials of the cold war are put into careful consideration. For instance, it was the colonial rule that led to the establishment of territorial boundaries and the institutions in the South East Asian countries. More over, the nationalism that later developed was responsible for the rising of new political discourse in the countries. What’s more, the advent of the cold war was important in that it helped to determine the nature of authority in the post colonial South East Asian countries. The bottom-line is that authoritarian regimes are common and widespread in South East Asia. Still, some countries are democratic. According to Hub pages, the region has for a long time struggled...
12 Pages(3000 words)Essay

Lumumba and History of Congo

Patrice Lumumba was assassinated on 17 January 1961. His assassination was plotted by the U.S and Belgian governments in conjunction with some Congolese accomplices. A Belgian execution squad was set up to kill him.
Reasons for Colonisation
Foreigners invaded Africa in the late 1800s and early 1900s for many reasons. Various African countries were colonized by different countries who were in pursuit of different agendas. For instance, Kenya was colonized by Britain who wanted to conduct a slave trade. The following are some of the reasons why African countries were colonized:
i. Search for raw materials. While carrying out their excursions, the European realized that Africa was a very rich continent and its inhabit...
1 Pages(250 words)Essay

Causes of Colonialism The colonization of the Western hemisphere by different countries started as early as the 11th century with the influx of Catholic Spain and Portugal into the region. An analysis of the whole colonial process in the region indicates that the two main reasons for the colonization of the Western hemisphere were economic and religious reason. Though there existed other factors like culture in the colonization process, economic and religious reasons pushed the major colonizers to acquire lands in the New World (Mignolo and Ennis, 2001). For example, research states that Spain was one of the first countries to look for colonies and was in it purely for the economic reason. A treaty influenced by the Pope in the ye...
2 Pages(500 words)Essay

Influence of Colonialism on Politics and Economics of Africa Nations

... permanently in a country, in imperialism the foreign power has control of the country except that not many people come to settle in the country. He gives example of Australia, New Zealand, South Africa and Latin America as being colonized, and most of Africa and Asia as being imperialized (47). This research, like most academic papers, recognizes both imperialism and colonization as colonization. Colonialism in the study countries The French conquered Algeria in the period of 1830 to 1847. The location of Algeria as a uniting hub for Europe, Middle East and Africa had made Algeria to be occupied by various colonialists before including Romans, Arabs and Turkish. According to Blanch, the French were established in Algeria by early 20th...
13 Pages(3250 words)Essay

Ways to Get Rid of Poverty in South Asia

...Poverty in South Asia Affiliation Introduction South Asia is one of the most populated regions in the world. It is characterized by diverse ethnic groups, religions and languages. This region plays an important role in the arena of international politics and global economic activities due to its strategic location. South Asia has a number of land and sea links that connect with other regions such as East Asia, the Middle East and central Asia. Owing to its large population and great diversity, poverty has remained to be one of the major problems facing the region. This paper analyses the progress the region has made in addressing the problem of poverty from the start of the millennium (year 2000) and the major factors affecting poverty...
6 Pages(1500 words)Research Paper
sponsored ads
Save Your Time for More Important Things
Let us write or edit the coursework on your topic "Colonialism and South Asia" with a personal 20% discount.
GRAB THE BEST PAPER

Let us find you another Coursework on topic Colonialism and South Asia for FREE!