Comments (0)
Add to wishlistDelete from wishlist
Cite this document
Summary
This paper seeks to discuss Muslim culture by relating information from a text with the film, Islam: Empire of Faith, produced by Robert Gardner…
Download full paperFile format: .doc, available for editing
HIDE THIS PAPERGRAB THE BEST PAPER96.7% of users find it useful 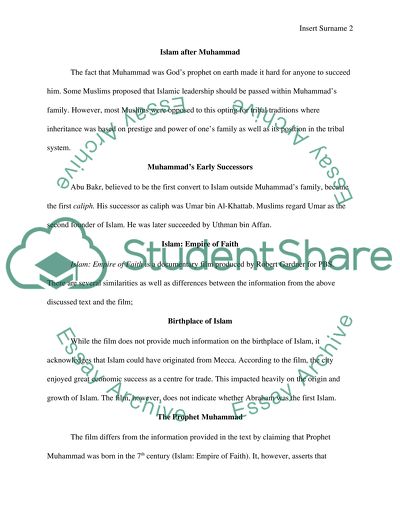 Muslim Culture Introduction Muslim culture refers to the many diverse Islamic religious groups across the world and their variations on customs and traditions. This paper seeks to discuss Muslim culture by relating information from a text with the film, Islam: Empire of Faith, produced by Robert Gardner for PBS.
Birthplace of Islam
Mecca, a city in Arabia, was the birthplace of Islam. It first became a settlement located on a shrine called the Ka’bah. The Ka’bah housed a huge stone that was believed to have been brought to earth by Archangel Gabriel. This stone was given to Abraham and his son Ishmael. From this, Muslims believed that Abraham was the first Muslim. Mecca had grown into a huge city by the time prophet Muhammad was born in the 6th century.
The Prophet Muhammad
Although the exact date of birth of Prophet Muhammad is not known, it is believed that he was born in A.D 570. Muhammad worked as a caravan trader and later worked for a wealthy widow as her business agent. He managed to alleviate the divisions in Mecca that had been caused by large influx of foreigners. Muhammad set to subjugate Mecca. Under the leadership of Muhammad, Islamized Arabs conquered many parts of Arab.
Islam after Muhammad
The fact that Muhammad was God’s prophet on earth made it hard for anyone to succeed him. Some Muslims proposed that Islamic leadership should be passed within Muhammad’s family. However, most Muslims were opposed to this opting for tribal traditions where inheritance was based on prestige and power of one’s family as well as its position in the tribal system.
Muhammad’s Early Successors
Abu Bakr, believed to be the first convert to Islam outside Muhammad’s family, became the first caliph. His successor as caliph was Umar bin Al-Khattab. Muslims regard Umar as the second founder of Islam. He was later succeeded by Uthman bin Affan.
Islam: Empire of Faith
Islam: Empire of Faith is a documentary film produced by Robert Gardner for PBS. There are several similarities as well as differences between the information from the above discussed text and the film;
Birthplace of Islam
While the film does not provide much information on the birthplace of Islam, it acknowledges that Islam could have originated from Mecca. According to the film, the city enjoyed great economic success as a centre for trade. This impacted heavily on the origin and growth of Islam. The film, however, does not indicate whether Abraham was the first Islam.
The Prophet Muhammad
The film differs from the information provided in the text by claiming that Prophet Muhammad was born in the 7th century (Islam: Empire of Faith). It, however, asserts that Muhammad conquered Mecca and its neighboring. The film shows that although men were killed during wars and women and children sold to slavery, Muhammad refused to exact bloody revenge. He used violence only against the idols at Ka’bah.
Islam after Muhammad
After the death of Muhammad, the film points out unity as the key factor that led to the fast spread of Islam through conquest. Similar to information from the text, the film points out that Muhammad did not live to see much of the success achieved by his followers.
Muhammad’s Early Successors
The film mentions on the first four caliphs that succeeded Prophet Muhammad. However, there is no mention that three of these first four caliphs were assassinated. This is neither mentioned in the text. The film, however, talks of the immense work done by these caliphs in spreading Islam beyond the confines of Arabia (Islam: Empire of Faith).
Conclusion
Islamic culture continues to interest scholars across the world. The origin, growth and culture of Islam are among the most researched topics on this religion. There is need, however, for scholars to look for more information on this religion in order to shed more light on contentious issues.
Works Cited
Islam: Empire of Faith. Dir. Robert Gardner. Perf. John Travolta and Halle Berry. Public Broadcasting Service, 2001. Film. Read More
Share:
Tags
Cite this document
(“Muslim Culture Essay Example | Topics and Well Written Essays - 500 words”, n.d.)
Muslim Culture Essay Example | Topics and Well Written Essays - 500 words. Retrieved from https://studentshare.org/religion-and-theology/1648113-muslim-culture

CHECK THESE SAMPLES OF Muslim Culture

...? Muslim Women Affiliation) On the greatest of forums of religion and theology, Islam has often been criticised for delivering unequal rights to the genders; women being given less than that to men, and it is also frequent that various scholars have advocated for and against the issue. It is a matter of worthy attention that throughout the last fourteen centuries of Islamic law in this world, the issue of women rights and inequality with regards to society, politics and cultures as compared to the opposite gender has been a constant target of numerous media dialogues. The cause of this constant criticism is not difficult to notice; the issue remains intact even in the presence of defiant or defensive responses from Muslim clerics regarding...
4 Pages(1000 words)Essay

...proportion of the total Muslim American population belongs to the above two categories respectively (pp 9). Impacts of expanding the Muslim American population The impact of Muslim community on American socio-economic sphere is drastically increasing despite the said theological or statistical jargons (ZAHEDI, 2011). The growing significance is evident in the contemporary races related socio-economic issues occurring in the country. Muslim culture, believes and even proliferation seems to have impacts on the large society (Bayoumi, 2011). According to book “Being Muslim in America” book 25 percentage proportion of the...
6 Pages(1500 words)Research Paper

...? Muslim World Introduction In a religious sense, the term Muslim world refers to the whole people who follow the teachings of Islam. From a modern geopolitical perspective, this term is used collectively to refer to Muslim-majority countries and regions. Muslims account for nearly 23.4% of the world population as of 2010. The history of the Muslim world can be dated back to 7th century where the Islamic prophet Muhammad delivered his first recitations in Arabia. The Islamic faith is emphasized as a religion as well as a social institution throughout the history of the Muslim world. During the period of Rashidun and Umayyads, the Caliphate grew quickly and the Muslim power expanded beyond the Arabian Peninsula. Although the Islamic...
8 Pages(2000 words)Essay

...and critic of how family deals with matters in accordance to the culture, lays focus in the paper. Arguments in the paper provide a non-bias approach, roles of different individuals in carrying out counseling also included. As a way of appreciating diversity in culture, the report will relay different psychological aspects that differ and are contrast to beliefs of the Muslim culture. A family being a major component to all cultures, all family compositions combined to form a successful channel of resolutions. Marriage divorce and children upkeep mainly the focus, believed that life is a continuous process, the Muslim...
7 Pages(1750 words)Research Paper

...As the Muslim World enters the twenty-first century, controversies over the meaning of the Quran and the methods for its interpretation grow in intensity. Many have claimed that the Quran needs to be interpreted from a novel, and modern perspective which is more consistent with the structure and pattern of lifestyles in modern world. This group has advocated the re-interpretation of the Quran for greater harmony with the twenty-first century. Others, however, have argued the impossibility of interpreting the Quran, the very heart and core of Islam, in any way intended to satisfy a predetermined objective. In other words, Muslims are not at liberty to re-interpret the meaning of the Quran in order to support a religious reformation...
4 Pages(1000 words)Essay

... are still under oppression (Wadud 2006). Wadud brings out the concepts of Islam as a religion and the way justice should be served relative to the history of the religion and the cultural situation in history. She also motivated the need to attain freedom as the nations of the Muslim belief (Barbas 2002) Stowasser clearly discusses the rights and the role of women in the Muslim society. Modern reading from the Qura'n is not just about getting the words and following the doctrines blindly. Logical and coherent varied understanding from the Qura'n does not in any way indicate harassing of the women anywhere. In fact contrary to what is being practiced, in the early times of Islam establishment, women could visit Muhammad and discuss with him...
4 Pages(1000 words)Essay

15 November The Brothers Analysis One thing that I disliked about the stylewas the fact that the narrative was quite non-linear in structure. Its non-linearity occasionally became irritating. There were frequent moments in which I felt that the author had used the jumping around as a substitute for a sensible development of the character. Nevertheless, I must say that the non-linear structure of the story in part, bore the flavor of the disjointed familial relationships that the members of the family discussed had had. The story also had numerous depressing and possibly sick elements in it like the sister’s craze for her brothers. Beyond a certain limit, the purity of the love becomes suspicious. Another elements that was disturbi...
1 Pages(250 words)Essay

...Veil Fashion and Islamic Identities One of the consequences of modernity and the entailing developments such as globalization, geographical mobility,empowerment and democracy is that societies across the globe could no longer exist in isolation. (Pellicani, 1994, pp. 205) What this means is that cultures and belief systems are constantly being influenced by external forces. This is best demonstrated in the way the veil or hijab is worn as a fashion statement by many Muslim women. It is clear that this piece of clothing came to represent an evolving identity that emerge as Muslims try to navigate the rules and norms of their culture and religion on the one hand and the impact of modernity on the other. In Islamic fundamentalism, women...
2 Pages(500 words)Outline

Nermin S. Sabry & Katherine R. Bruna. (2007). Learning from the Experience of Muslim in American Schools: Towards a Proactive Model of School-Community Cooperation. Iowa: Multicultural Perspectives, 9(3), 44–50
These article talks about the challenges faced by young Muslims studying in US, these challenges are normally fueled through misinformation about Islamic teachings propagated through the press, international media and preconceived biased minds. One example that supports what the article is talking about is a concern raised by a Muslim student in US. A social studies teacher once said in classroom when he was teaching about the Middle East that the region is of peace heaters, this embarrassed the student. I will use this...
1 Pages(250 words)Annotated Bibliography

... have different ways of connecting with God. They have different beliefs that they incorporate in their prayers as well. In this regard, prayer can, therefore, be considered as a sustenance network. Various religions maintain that God heals only those who pray. So those who pray would be considered “religious” while those who do not have a religion will be considered “non-religious”. This is why Mary explains that faith-backed prayers are an important element of any religion. The Jewish, the Christian, the Muslim, the Buddhist, as well as other religious groups believe in the importance of faith. The essential factor about prayer is how it helps people to get into a personal relationship with God; God is the sustainer of life. In this case...
6 Pages(1500 words)Essay
sponsored ads
Save Your Time for More Important Things
Let us write or edit the essay on your topic "Muslim Culture" with a personal 20% discount.
GRAB THE BEST PAPER

Let us find you another Essay on topic Muslim Culture for FREE!