Comments (0)
Add to wishlistDelete from wishlist
Cite this document
Summary
A number of Indigenous groups from Africa had suffered from long periods of strife. A region like East Africa was uncertain of the…
Download full paperFile format: .doc, available for editing
HIDE THIS PAPERGRAB THE BEST PAPER94.7% of users find it useful 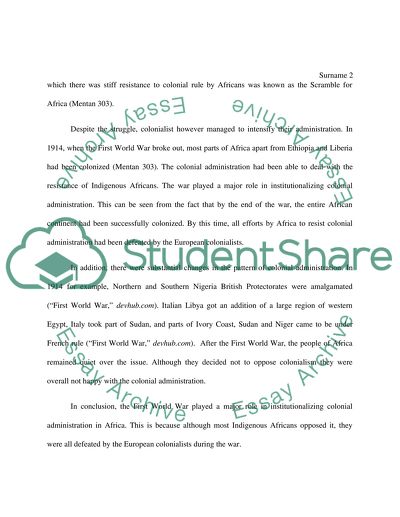 Download file to see previous pages This is because very little or no impact could be witnessed in their lives due to colonialism. Colonialism however continued to grow and intensify prompting the reaction of Africans in the regions mentioned and a few other regions. The period during which there was stiff resistance to colonial rule by Africans was known as the Scramble for Africa (Mentan 303).
Despite the struggle, colonialist however managed to intensify their administration. In 1914, when the First World War broke out, most parts of Africa apart from Ethiopia and Liberia had been colonized (Mentan 303). The colonial administration had been able to deal with the resistance of Indigenous Africans. The war played a major role in institutionalizing colonial administration. This can be seen from the fact that by the end of the war, the entire African continent had been successfully colonized. By this time, all efforts by Africa to resist colonial administration had been defeated by the European colonialists.
In addition, there were substantial changes in the pattern of colonial administration. In 1914 for example, Northern and Southern Nigeria British Protectorates were amalgamated (“First World War,” devhub.com). Italian Libya got an addition of a large region of western Egypt, Italy took part of Sudan, and parts of Ivory Coast, Sudan and Niger came to be under French rule (“First World War,” devhub.com). After the First World War, the people of Africa remained quiet over the issue. Although they decided not to oppose colonialism they were overall not happy with the colonial administration.
In conclusion, the First World War played a major role in institutionalizing colonial administration in Africa. This is because although most Indigenous Africans opposed it, they were all defeated by the European colonialists during the war.
The Second World War had profound effects upon Africans struggle for Independence and the European leadership in ...Download file to see next pagesRead More
Share:
Tags
Cite this document
(“AFRICAN HISTORY Essay Example | Topics and Well Written Essays - 2250 words”, n.d.)
AFRICAN HISTORY Essay Example | Topics and Well Written Essays - 2250 words. Retrieved from https://studentshare.org/history/1627477-african-history

CHECK THESE SAMPLES OF AFRICAN HISTORY

Structure and values of the NHS

...ability but also character and moral development. King was an eloquent speaker committed to social change. His impact on African American community was astounding and he rose to become a Black American Icon. As per (Mc Elrath 15)“ Martin Luther King Jr. holds a unique place in American history, as he was a controversial figure in his own time”. Martin Luther King Jr’s words are known throughout the world: “I have a dream”. Every year on his birthday, recordings ring out the great leaders’ deep voice pronouncing those famous words. But King’s dream that people not be judged by the color of their skin was not his only dream. He had many. He dreamt of ridding the world of poverty and violence. He dreamed...
4 Pages(1000 words)Essay

The importance of African History

...Insert Introduction The Greek Empire was wide enough to cover the Athenian and the Macedonian Empires and covered a wide epoch starting from 8th century BC to ca. 600 AD. During the Hellenistic period, the Greek Empire covered the Diadochi states such as the Seleucid, the Antigonoid and the Ptolemaic dynasties. The influence of the Grecian-Hellenistic power had a profound influence over Africans in Egypt and North Africa because of it imperialist nature. According to Swain, the Greek Empire is known to have established diplomatic relations in 324 BC with greater parts of North Africa. This is to the effect that the Libyans and Carthaginians are some of the people who sent complimentary embassies to Alexander the Great...
1 Pages(250 words)Essay

Alcoholism as the Reason of Family Ruining

...﻿AFRI 222Homework Reading Assignment #3 - part 2 / Due: See syllabus Ch. 2 “Legacies of the Past: Themes in African History,” by John Akare Aden and John Hanson. READ ONLY the section onIndependence and Postcolonial Africa, pp. 51-54 For additional help, View the video: Africa: States of Independence – the Scramble for Africa, and take notes on the following questions http://www.youtube.com/watch?v=LbT44HwzNrI 44:54 min. total, (at 23.36 begins the topic of African nationalism & Independence), (at 33.38 begins the section on post-independence) 1. What external pressures caused European governments to end their occupation and pull out of African territories? Among the external pressures were the independence of North America... Manuh, a...
2 Pages(500 words)Assignment
sponsored ads
Save Your Time for More Important Things
Let us write or edit the essay on your topic "AFRICAN HISTORY" with a personal 20% discount.
GRAB THE BEST PAPER

Let us find you another Essay on topic AFRICAN HISTORY for FREE!