Comments (0)
Add to wishlistDelete from wishlist
Cite this document
Summary
This research is being carried out to analyze the impact of the Cold War on the Middle East, outline patterns of alliance (which states sided with which superpower, during which period AND why?), justify and/or criticize U.S. policy during the Cold War. …
Download full paperFile format: .doc, available for editing
HIDE THIS PAPERGRAB THE BEST PAPER94.5% of users find it useful 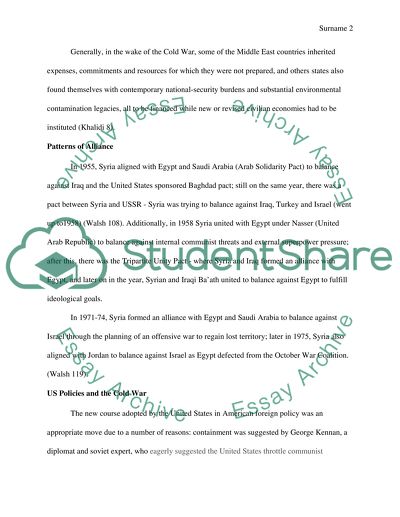 ﻿The Cold War
Impact of the Cold War on the Middle East
The cold war had a lot of effects not only to the participating countries but also the neighboring states: moreover, the effects were both positive and negative depending on the situation (Khalidi 4). Significantly, when it comes to the nuclear legacies, most of them can be traced back to the cold war, with most of the Middle East states experiencing the availability of new technologies for nuclear power and energy, use of radiation for improving medical treatment and health; moreover, environmental remediation, industrial production, research science, and technology development have all benefited from the carefully managed application of radiation and other nuclear processes.
On the other hand, military development and spending has continued despite the end of the cold war especially in relation to the exploitation of defensive systems; furthermore, former superpowers in the Middle East have proceeded to maintain and develop existing weapons and delivery systems. Additionally, with some countries having had overseas military bases and facilities, they have inherited responsibilities and costs especially with the urge of more production and serving facilities (sometimes even military staging and storage); as well, nuclear and conventional forces remain at levels reasonably high for a peacetime environment with localized conflicts and tensions having replaced the former bilateral nuclear confrontation.
Generally, in the wake of the Cold War, some of the Middle East countries inherited expenses, commitments and resources for which they were not prepared, and others states also found themselves with contemporary national-security burdens and substantial environmental contamination legacies, all to be financed while new or revised civilian economies had to be instituted (Khalidi 8).
Patterns of Alliance
In 1955, Syria aligned with Egypt and Saudi Arabia (Arab Solidarity Pact) to balance against Iraq and the United States sponsored Baghdad pact; still on the same year, there was a pact between Syria and USSR - Syria was trying to balance against Iraq, Turkey and Israel (went up to1958) (Walsh 108). Additionally, in 1958 Syria united with Egypt under Nasser (United Arab Republic) to balance against internal communist threats and external superpower pressure; after this, there was the Tripartite Unity Pact - where Syria and Iraq formed an alliance with Egypt, and later on in the year, Syrian and Iraqi Ba’ath united to balance against Egypt to fulfill ideological goals.
In 1971-74, Syria formed an alliance with Egypt and Saudi Arabia to balance against Israel through the planning of an offensive war to regain lost territory; later in 1975, Syria also aligned with Jordan to balance against Israel as Egypt defected from the October War Coalition. (Walsh 119).
US Policies and the Cold War
The new course adopted by the United States in American foreign policy was an appropriate move due to a number of reasons: containment was suggested by George Kennan, a diplomat and soviet expert, who eagerly suggested the United States throttle communist influence in Eastern Europe and Asia, and one of the ways to accomplish this was by establishing NATO so the Western European nations had a defense against communist influence.
Key Documents
Some of the key documents included: Potsdam Declaration – (July 26, 1945) informal statement issued by Harry S. Truman, Winston Churchill, and Chiang Kai-Shek outlining the terms for a Japanese surrender, Baruch Plan – (1946) proposal by the U.S. to the United Nations Atomic Energy Commission (UNAEC) to expand between all nations the trade of basic scientific information for peaceful ends, and NSC-68 – (April 14, 1950) classified report written and issued by the United States National Security Council outlining the National Security Strategy of the United States for that time.
Works Cited
Walsh, David. Syrian Alliance in the Post-Cold War Era: The Fletcher Forum of World Affairs. 2013. Web, January 27, 2014 < http://www.fletcherforum.org/wp-content/uploads/2013/05/Wallsh-37-2.pdf > Khalidi, Rashid. Rethinking the Cold War in the Middle East: Sowing Crisis, 2012, Web, January 27, 2014 < http://www.beacon.org/client/pdfs/0310_ch1.pdf >Read More
Share:
Tags
Cite this document
(“The impact of the Cold War on the Middle East Essay”, n.d.)
The impact of the Cold War on the Middle East Essay. Retrieved from https://studentshare.org/history/1626554-analyze-the-impact-of-the-cold-war-on-the-middle-east-outline-patterns-of-alliance-which-states-sided-with-which-superpower-during-which-period-and-why-justify-andor-criticize-us-policy-during-the-cold-war-name-and-summarize-key-documents-agre

“The Impact of the Cold War on the Middle East Essay”, n.d. https://studentshare.org/history/1626554-analyze-the-impact-of-the-cold-war-on-the-middle-east-outline-patterns-of-alliance-which-states-sided-with-which-superpower-during-which-period-and-why-justify-andor-criticize-us-policy-during-the-cold-war-name-and-summarize-key-documents-agre.
Comments (0)
Click to create a comment or rate a document

The Effects of the Cold War on the Middle East

...?The Effects of the Cold War on the Middle East Introduction If the Cold War is deemed as the communism’s conflict with the capitalist west under theheadship of the United States, communism decidedly becomes defeated. The Soviet leadership’s expansionist desire to force communism upon the rest of the earth panicked the wealthy capitalist west whose reaction to the communist expansionism eventually kindled the war. The condition for the communism’ triumph was to bring the whole world under communist rule, whereas the West’s target was to thwart the threat of communism. Eventually with the dissolution of the former Soviet...
9 Pages(2250 words)Essay

The effects of the cold war on the middle east

...?The effects of the cold war on the Middle East The cold war was the result of corroding relationships between the United s and the Soviet Unionafter the end of the Second World War. The US President Franklin D. Roosevelt did not need the Soviet support any more to win over Japan after testing the atomic bomb, ensuing the 50 years long Cold War. Thus, Yalta Conference in Crimea, Soviet Union, in February 1945 between the “Big Three” allies of the Second World War was one such event that structured the start of the Cold War (The...
8 Pages(2000 words)Research Paper

EFFECT OF COLD WAR ON MIDDLE EAST: PARAPHRASING FOR SOURCES

...countries like Israel’s experiences regarding conflicts. In the "Post Cold War" era, it is assumed that US-centric aspects play a key role in the revolution in military affairs, however, the truth is a much broader-based evolution happened or happening in military affairs. This perspective indirectly means that the Afghan and Iraq Wars are not providing any lessons to the current as well as the potential enemies of America. Such lessons include: 1) First, the lessons that are learned by the enemy states, which impacts their regular military forces: There are about 22¬24 countries in the Middle East Asian and North African Region, among...
16 Pages(4000 words)Essay

War and Peace in the Middle East

...by President Bush to cover up for the administrative inability to find Osama Bin Laden and the inability to avert the resurgence of the Taliban in Afghanistan (WALTZ, 2001:98). Bureaucratic incentives of war also stem from the preference of military leaders to undertake offensive strategies as opposed to bureaucratic leaders. The goal of regime changed in Iraq Post-cold war Europe and Middle East; A Comparison. The end of the cold war has had a dual impact on international relations. There has been a reduction of conflict that was motivated by superpower ideological differences. With the collapse of...
8 Pages(2000 words)Essay

War and Peace in Middle East

...and later they helped UK in World War II (ICS, 2008). Religious impact on politics in Middle East and the Democratic Government After World War II, due to Arab domination, Islam plays major role in the politics of the states in the Middle East. As Mark Tessler (2002), said that the rulers in the Middle East won’t allow the people to look towards democracy, as most of the countries are under rule of kings and dynasties or in the hand of dictators like Saddam Husain in Iraq, King Husain in Saudi Arabia and Hosni Mubarak in Egypt. The people in those countries dare not to question the...
7 Pages(1750 words)Essay

Affects of the Cold War on the Middle East

...so that America could back out from SALT II treaty from the Senate (War in Afghanistan, “Answers.com,” par. 1-4). The Iranian Revolution itself was a direct consequence of the Cold War and it further impacted the political affairs as well as the Soviet influence in the Middle Eastern countries. Since Iran was the largest Oil enriched country that shared a long border with the Soviet Union, the country was strategically and economically important for both America and the Soviet Union. The USA and the UK jointly planned the overthrow of the elected government of Mossadeh and enthroned the Shah Government. But the US-backed Shah Government fueled the...
11 Pages(2750 words)Essay

The middle east and the cold war

...The Cold War and the Middle East The Cold War between the Soviet Union and America, whichpersisted for nearly half a century, created a polarized world with countries and political parties divided in their support for the two superpowers. The Cold War, which began in a couple of years following World War II, began as a result of several war time suspicions and events that transpired between the Soviet Union and America in their joint battle against the Nazi Germany. The Middle Eastern countries also played a crucial role during cold...
2 Pages(500 words)Essay

...the real strength of this group to intrude into the internal politics of some nations in the Middle Eastern context. For instance, the border areas of Iraq and Syria became under the direct control of this group. Besides, the leaders began to recruit foreigners in the name of Jihad. Besides, this group played an important role in Syrian Civil War by capturing cities in Syria and establishing their own mode of governance. In the present condition (say, in 2014), this group is known as the Islamic State (IS). This final transformation proves the real aim of this group, i.e. the ultimate aim to form an Islamic Caliphate in the Middle Eastern context. IS’s impact on...
9 Pages(2250 words)Research Paper
sponsored ads
Save Your Time for More Important Things
Let us write or edit the essay on your topic "The impact of the Cold War on the Middle East" with a personal 20% discount.
GRAB THE BEST PAPER

Let us find you another Essay on topic The impact of the Cold War on the Middle East for FREE!