Comments (0)
Add to wishlistDelete from wishlist
Cite this document
Summary
As such, this paper seeks to discuss and evaluate some of the arguments raised in different articles. The paper will also outline the prospects of success of this kind of…
Download full paperFile format: .doc, available for editing
HIDE THIS PAPERGRAB THE BEST PAPER98.6% of users find it useful 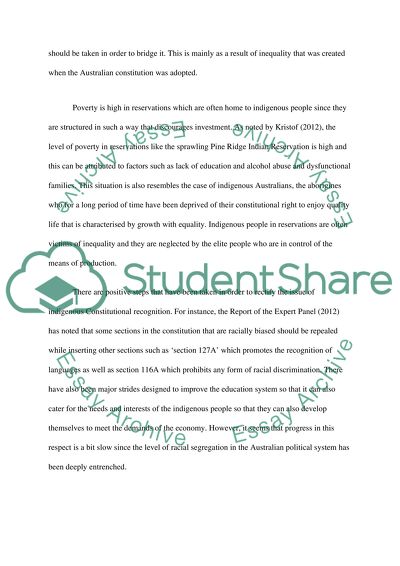 A close reading of the articles given present various arguments for indigenous constitutional recognition. As such, this paper seeks to discuss and evaluate some of the arguments raised in different articles. The paper will also outline the prospects of success of this kind of constitutional recognition with regards to the case of Australian indigenous people.
First and foremost, it can be observed that the Report of the Expert Panel (2012), suggest that the Aboriginal and Torres Strait Islander peoples are the first people to live in Australia but they were apparently excluded from the deliberations that led to the adoption of the Constitution. The constitution grants the rights to all citizens and it is designed to ensure that that equality and equity prevail among all citizens regardless of race disparities. However, it has been realised that the indigenous Australians have been sidelined in the country’s constitution on the basis of racial bias. As such, it has been realized that there is need to achieve full inclusion of Aboriginal and Torres Strait Islander peoples in the Constitution. This can be done through removing the notions of racial bias towards the indigenous people while at the same time recognising their heritage, culture as well as language.
On the other hand, it can be noted that Langton (2008) states that people are still disillusioned by the widely held perceptions they have about the aborigines who are often viewed as backward and primitive. In many people’s minds, the indigenous Australians are not equal to other people as a result of their backwardness. Constitutionally, the indigenous people have often been viewed as second class citizens while they are the original people in Australia. This view is also supported by Behrendt (2010) who argues that the constitutional gap between haves and have notes (Indigenous people) is wide hence concerted measures should be taken in order to bridge it. This is mainly as a result of inequality that was created when the Australian constitution was adopted.
Poverty is high in reservations which are often home to indigenous people since they are structured in such a way that discourages investment. As noted by Kristof (2012), the level of poverty in reservations like the sprawling Pine Ridge Indian Reservation is high and this can be attributed to factors such as lack of education and alcohol abuse and dysfunctional families. This situation is also resembles the case of indigenous Australians, the aborigines who for a long period of time have been deprived of their constitutional right to enjoy quality life that is characterised by growth with equality. Indigenous people in reservations are often victims of inequality and they are neglected by the elite people who are in control of the means of production.
There are positive steps that have been taken in order to rectify the issue of indigenous Constitutional recognition. For instance, the Report of the Expert Panel (2012) has noted that some sections in the constitution that are racially biased should be repealed while inserting other sections such as ‘section 127A’ which promotes the recognition of languages as well as section 116A which prohibits any form of racial discrimination. There have also been major strides designed to improve the education system so that it can also cater for the needs and interests of the indigenous people so that they can also develop themselves to meet the demands of the economy. However, it seems that progress in this respect is a bit slow since the level of racial segregation in the Australian political system has been deeply entrenched.
References
Behrendt, L 2010, ‘Closing the Evidence Gap’ in M. Lyons & M. Lyons (eds) More than
Luck, Centre for Policy Development, 2010. Viewed 12 January 2014, from: .
Kristoff, Nick (2012) ‘Poverty’s Poster Child’, New York Times, May 12, 2012. Viewed 12
January 2014, from: < http://www.nytimes.com/2012/05/10/opinion/kristof- povertys-poster-child.html>.
Langton, M. (2008) ‘Trapped in the Aboriginal Reality Show’, Griffith Review, 19.’ Viewed
12 January 2014, from: .
Recognising Aboriginal and Torres Strait Islander Peoples in the Constitution: The Report of
the Expert Panel (2012). ‘Executive Summary.’ Viewed 12 January 2014, from: . Read More
Share:
Tags
Cite this document
(“Indigenous Australians Essay Example | Topics and Well Written Essays - 500 words”, n.d.)
Indigenous Australians Essay Example | Topics and Well Written Essays - 500 words. Retrieved from https://studentshare.org/history/1625334-indigenous-australians

CHECK THESE SAMPLES OF Indigenous Australians

...?Introduction Education is a key component to any sound economy and the quality of educational for indigenous Australians has been under scrutiny in recent times. This has been more glaring in a number of areas including academic achievements, intake and enrolment as well as participation. AESOC (2008) reckons that the representation of students in other areas in vocational education and training is also something to write about even though with pinch of salt. Regardless of some remarkable milestones, educational stakeholders both in government agencies and the private sector have expressed concerns about the sluggish pace at which reforms have unfolded. Often, many indigenous students...
8 Pages(2000 words)Essay

...African Ethnic Groups Do They Need Recognition? Many sovereign countries such as the United s of America have long been questioned for the system by which it built its supremacy. The morals of its freedom may largely be a myth but it is not an isolated case. The moralistic myth or its own independence is the same delusion other countries have evangelized races and countries in order to take their land and identities away. Africa is one such case. There are more than 100 ethnic groups in Africa that trace their history through hundreds of years before people from the West started coming to conquer them. It is also this roots that makes the term Indigenous Peoples, not just ambivalent, but highly paradoxical. Definition of...
8 Pages(2000 words)Essay

...? Indigenous Australians and Social Exclusion This paper articulates on social exclusion of the indigenous community in Australia. In essence, it analysis various significant disadvantages that are the root cause of the social exclusion, over and above, giving the reasons as to why the government has not been able to address the issue for over a decade. Introduction Social exclusion is the process whereby a rupture occurs in a social bond, in that the society fails to provide certain individuals, and groups with rights and benefits that are normally accessible to its preferred members such as employment, healthcare, housing and education among other necessities (Hunter, 2009). Social...
6 Pages(1500 words)Essay

...? Indigenous Immigrants and Indigenous Rights Part I: Introduction The issue of the American and Latin politics which have been covered with politics of ethnicity and indigenous culture has been a major interest. In the modern world, the issue of indigenous culture heritage and continuity has been a major component especially in Latin America. This can be seen in many countries within Latin America. To be able to understand these issues, it is necessary to look at a brief history of Latin America political and economic history. About five centuries ago, European arrived in the Latin America and this changed the socioeconomic and socio-political landscape in most parts of...
5 Pages(1250 words)Research Paper

...The Philosophy and Practice of Cultural Proficiency Offers Solutions to Unequal Health Outcomes for Indigenous Australians Introduction Indigenous Australians are descendants of the original inhabitants of the Australian continent and islands close by (Hastings, 2006). They are differentiated as Aboriginal and Torres Strait Islanders, both together constituting about 2.7% of Australia’s population (QCOSS, 2009). Indigenous Australians are the least healthy as compared to the remaining Australian population, with lower life expectancy at birth, and greater burden of illness including higher rates of mortality, disability, and hospitalization (O’Connor-Fleming & Parker, 2001). Further, Australia’s Aborigines have suffered a terrible... and...
6 Pages(1500 words)Essay

...-American Commission on Human Rights., & Organization of American States, 2000). Some of the indigenous people had chiefdoms; ruled by chiefs, states, as well as empires that had organized cities. Colonization had a significant impact on these populations as it altered their ways of life completely. Within the first century, it is imperative that the population if indigenous communities diminished by between 80 to 90%, with disease being the major reason for the demise (Divina et. al, 2004). Smallpox, cholera and measles ravaged the continent having come with the Europeans. The losses from disease were worsened by massive killings of the indigenous people by the Europeans, who enslaved...
1 Pages(250 words)Coursework

...activity (Hunt). They even experienced seasons. The phenomena around them was beyond their understanding, for instance how a seed germinates, the rain falls and the season changes. This lack of understanding may have driven them to the belief of the existence of a god and spirits that had a knowledge and influence on these circumstances. Indigenous would be the right term to use. My argument is that it implies something original that existed in the earlier times and linked specifically to a particular group. It sounds more decent, inoffensive and is not derogatory. Complementary dualism refers to the belief in two opposite matters that come together in support of each other so as to be efficient for example, man...
3 Pages(750 words)Essay

...Gender Roles and Media Introduction The media has a very crucial role in shaping the ideas and agenda of various issues in the society. Even though some media are based on fiction, such as television shows and films, they do have a bearing on the reality of life for most people. Media and especially mass media such as television and magazines have a way of portraying the two genders and their perceived roles. They set the agenda and the way people think about gender (Bordwell & Thompson, 20014). In the following article, entertainment magazines and films are analyzed in the various ways in which they depict gender and gender roles. The reason for choosing entertainment magazines is that they are mostly read by people who may... Roles and...
8 Pages(2000 words)Essay
sponsored ads
Save Your Time for More Important Things
Let us write or edit the essay on your topic "Indigenous Australians" with a personal 20% discount.
GRAB THE BEST PAPER

Let us find you another Essay on topic Indigenous Australians for FREE!