Comments (0)
Add to wishlistDelete from wishlist
Cite this document
Summary
Each one has contributed greatly to his country and tried to implement positive and beneficial change in the ways that they thought best. Both men were followers of a social…
Download full paperFile format: .doc, available for editing
HIDE THIS PAPERGRAB THE BEST PAPER92.6% of users find it useful 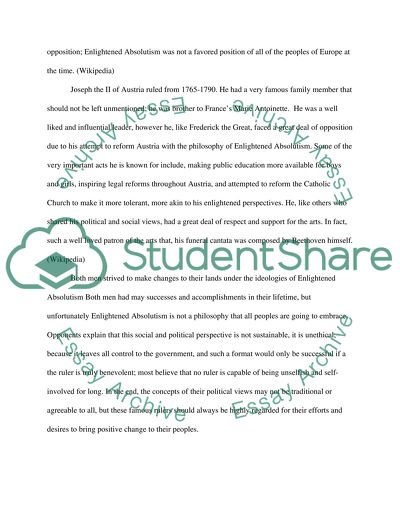 Due Germany Assignment Frederick the Great of Prussia and Joseph II of Austria are two unique and reputable leaders of history. Each one has contributed greatly to his country and tried to implement positive and beneficial change in the ways that they thought best. Both men were followers of a social and political ideology called “Enlightened Absolutism,” which refers to the belief in a single, absolute monarchy, or despot, where the ruler has complete and total control, but emphasizes rationality, religious tolerance, freedom of speech and of the press. They were, also, incredible supporters of the arts, sciences, and education. These men, despite their desire for positive reform, were met with much opposition throughout their causes and careers.
Frederick the Great ruled Prussia from 1740 to 1786. He has been remembered for many things, but some of those that stand out include his contributions as a brilliant tactician and military organizer, controlled grain prices so that the government stores good provide for poor families whose crops were unsuccessful, and beginning the first official school of veterinary medicine in Austria or Germany. He was, also, an accomplished linguist, speaking several languages, and talented musician. Most importantly, he is remembered for changing Prussia from an often forgotten European “backwater” location and into a thriving, economically strong and reformed region. However, again, much of the changes he attempted to implement were met with opposition; Enlightened Absolutism was not a favored position of all of the peoples of Europe at the time. (Wikipedia)
Joseph the II of Austria ruled from 1765-1790. He had a very famous family member that should not be left unmentioned; he was brother to France’s Marie Antoinette. He was a well liked and influential leader, however he, like Frederick the Great, faced a great deal of opposition due to his attempt to reform Austria with the philosophy of Enlightened Absolutism. Some of the very important acts he is known for include, making public education more available for boys and girls, inspiring legal reforms throughout Austria, and attempted to reform the Catholic Church to make it more tolerant, more akin to his enlightened perspectives. He, like others who shared his political and social views, had a great deal of respect and support for the arts. In fact, such a well loved patron of the arts that, his funeral cantata was composed by Beethoven himself. (Wikipedia)
Both men strived to make changes to their lands under the ideologies of Enlightened Absolutism Both men had may successes and accomplishments in their lifetime, but unfortunately Enlightened Absolutism is not a philosophy that all peoples are going to embrace. Opponents explain that this social and political perspective is not sustainable, it is unethical, because it leaves all control to the government, and such a format would only be successful if a the ruler is truly benevolent; most believe that no ruler is capable of being unselfish and self-involved for long. In the end, the concepts of their political views may not be traditional or agreeable to all, but these famous rulers should always be highly regarded for their efforts and desires to bring positive change to their peoples.
Works Cited
Wikipedia, . "Frederick the Great." Wikipedia. Creative Commons Attribution-Share Alike License, 11 Oct 2013. Web. 11 Oct 2013. .
Wikipedia, . "Joseph II, Holy Roman Emperor." Wikipedia. Creative Commons Attribution-Share Alike License, 24 September 2013. Web. 11 Oct 2013. . Read More
Share:
Tags
Cite this document
(“Germany Essay Example | Topics and Well Written Essays - 250 words - 15”, n.d.)
Germany Essay Example | Topics and Well Written Essays - 250 words - 15. Retrieved from https://studentshare.org/history/1623474-germany

CHECK THESE SAMPLES OF Germany

...? 28 February, Characteristics of Germans and Americans: Germans are very straightforward in their speech. They do not make use of formal words to unnecessarily complicate their speech. All they want is to convey to the listener their point with minimum inconvenience. Americans are also very much like them in this respect. Unlike Germans and Americans, people of Britain make their speech formal so as to regulate the tension words might convey to the listener (Culture Smart! Germany 41). Although, it is a good practice, yet it has its own cons. The listener does not understand the gravity of situation when listening to a speech full of words like “please” and “may”. On the other hand, German expression also has its cons....
1 Pages(250 words)Essay

...to the fact that Germany, if England was overrun, could just as easily begin doing the same to America. As for the Jews uniting to stop buying German goods, they were right to do what they needed to do to get the message across to Hitler. It was not, as Mr. Freedman suggests, because the Jews caused their own problems. Again, is he honestly suggesting that the Jews made their own bed, as the saying goes, for World War II? Hitler’s flying of the swastika prompted an outcry from the Jews, and to get their point across, they stopped buying German goods. It would be the same as if someone walked into a restaurant and sat down for a meal, but received less than standard service and cold food. They would not pay for their...
2 Pages(500 words)Essay

...7th May Hitler’s Table Talk Hitler’s Table talk consists of s of Hitler’s casual conversations during lunchand dinner time. These conversations were made in the presence of close friends and colleagues and present an unhindered access in the mind of Adolf Hitler – one of the worst tyrants that the world has seen. These conversations were made by Hitler during World War 2 years. The main topics which are covered in this book are the following – Hitler’s thought on his enemies – Russians , Americans , English and Jews Plans for the development of Germany and the territories occupied after the war. Discussion on the influence of religion in Germany and other countries. Hitler has shown complete contempt for...
4 Pages(1000 words)Essay

What an education mean to me

...Question One: America declared war on Germany for a number of reasons. Woodrow Wilson’s campaign slogan, however, was almost certainly somewhat a lie – though he was a peace loving man (and won the Nobel peace prize because of it) he also thought the world could be better served by the United States entering the war. To fully understand why the United States entered the First World War, it is important to understand Woodrow Wilson’s goals. He abhorred war, but was a practical man. He knew, as the war progressed, that Europe was being completely decimated and would have to be wildly re-structured because of the destruction at the war – and the fact that each side blamed the other for starting it. So while in some ways...
2 Pages(500 words)Essay

6 Pages(1500 words)Case Study
sponsored ads
Save Your Time for More Important Things
Let us write or edit the essay on your topic "Germany" with a personal 20% discount.
GRAB THE BEST PAPER

Let us find you another Essay on topic Germany for FREE!