Comments (0)
Add to wishlistDelete from wishlist
Cite this document
Summary
There were numerous laws on what could be done or was viewed to be taboo. There was a strong patriarchal system in place which presumed that men were more important than…
Download full paperFile format: .doc, available for editing
HIDE THIS PAPERGRAB THE BEST PAPER94.4% of users find it useful 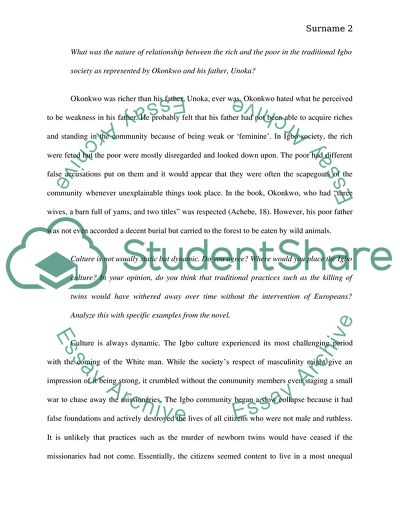 CHECK THESE SAMPLES OF Review of ( Things Fall Apart)

...?Things fall Apart Introduction Things Fall Apart, ed by Chinua Achebe, is an African prose that narrates the transition from a pre-colonial era to the colonial era. The novel addresses the crisis of African cultural collapse during the colonial rule. It concerns the traditional Igbo life prior to the advent of the missionaries and colonial government and the reaction of the Igbo people to the new order imposed by the missionaries and the colonial government. Okonkwo, the principal character, inability to accept the new order, in the face of the already collapsed Igbo culture brought him down. Nwoye, Okonkwo’s oldest son, was a major character that accepted and embraced the new order to the disappointment of his father. Nwoye... without...
7 Pages(1750 words)Research Paper

...Things Fall Apart “He has put a knife on the things that held us together and we have fallen apart (152).” Explain the significance of this statement. This exchange happens during a chat between Obierika and Okonkwo. The conversation is about different occurrences that have happened in their area since the arrival of colonialists. Obierikas view in the statement is echoing Okonkwo’s own thoughts on colonialism. He is disappointed by the fact that the white men have arrived and sought to change everything in the process disregarding the Igbo sense of Justice, he identifies the impossibility of the colonizers not to understand a thing...
4 Pages(1000 words)Essay

...﻿ Topic: “Things Fall Apart": Book Review Love for truth, painful experiences, sticking to the grassroots realities, imagination based on the practical vision make a brilliant writer. Some write for making a career and some for the sake of upholding the truth and to lend solid support for the common man and societal values. Chinua Achebe is a writer with all the positive qualities clubbed in appropriate proportions. The writings of such writers become a joke to some intellectuals and to the wise ones, they are like scriptural revelations. “Things Fall Apart” is a legacy-defining novel.1890s is the worst period in the history of slavery. Slavery in its most inhuman form is practiced... ! That is...
4 Pages(1000 words)Book Report/Review

...Apart’ is a book that was set in the Igbo community in Nigeria during the1890s when the Colonists began to explore the inlands of West Africa. Achebe strives to present the cultural statutes of the Igbo people as they were at a time when no Western influence had yet affected the community. On reading ‘Things Fall Apart’, one is immediately struck by the numerous complex ceremonies that attended daily life among the Igbo. For example, wedding ceremonies were complicated affairs that were punctuated by periodic sacrifices to various gods and goddesses. Then there were the egwugwu who would judge all legal disputes while observing numerous ceremonies. Even mundane...
5 Pages(1250 words)Essay

...The Power Of Women In Umuofia. The position and image of women in "Things Fall Apart" is an important topic. We could even say that women actually had great power and were revered. One might think that this novel presents women as a sadly oppressed group with no power, but there are several facts, which imply the contrary idea. For instance, women are the primary educators of children. Through story telling and other forms of discourse, they educate and socialize the children, inspiring in them intellectual curiosity about social values, relationships, and the human condition. The stories the women tell also develop the artistic consciousness of the children, in addition to entertaining...
2 Pages(500 words)Book Report/Review

...The Strengths of a Woman: Binding Force of A Nation Chinua Achebe has been hailed as one of the best of African Literature. In fact he has been credited for writing "African Literature that was truly African."(1) He writes about his native land, their culture and beliefs. The Novel Things Fall Apart tells of a warrior, named Okonkwo, who has fought a lot of fights and reaped wealth and respect. Underneath his strength and formidable size, he lived in fear. He didn't want to be like his father, a failure at everything. His mother died when he was young and he was left to his father. A man who lived life as it comes, playing his flute, drinking wine, and incurring debts. This led...
3 Pages(750 words)Book Report/Review

...Character Analysis of Things Fall Apart The purpose of this essay is to critically examine three characters from the book Things Fall Apart by Chinua Achebe. Gender roles play an important part in this piece and by looking at several characters within the piece, one can see specifically what those gender roles are and what they mean to the book overall. The three distinct characters to be discussed are Okonkwo, Chielo and Nwoye. Okonkwo is the first character to be examined. Okonkwo is the materialization of male dominance in a family setting. He is a successful part of the clan with three wives and many children. The fact that he...
4 Pages(1000 words)Essay

... Review of Things Fall Apart By Chinua Achebe Brief summary The work of Chinua Achene, “Things fall Apart”, focuses on thelife of Okwonko. He is a man who has strived to meet the heroism demands of his community in a remarkable manner. Additionally, he treasures this status and is unwilling to relinquish his honor for anything that may despise him. His father was a disgraced man in the society, an observation that triggered the zeal of Okwonko to strive towards changing the situation context. One thing that remains widely spelt in the entire work may be considered as Okwonko’s association to the beliefs and traditions of his clansmen. He involves himself in practices that go against his belief in an effort to appease the rest... of the...
2 Pages(500 words)Book Report/Review

...﻿Review of Things Fall Apart by Chinua Achebe The main subject matter in Things Fall Apart entails missionary and colonial influence in Africa, with specific focus on the Nigerian context. The novel illustrates the events which occurred in Nigeria during the pre-colonial period of the 1890s. Great conflict emerged between colonialism concept and the traditional beliefs of the tribes. During the stay in Banta, Okonkwo gets information that the white people residing in Omuofia have the intention of introducing their religion, which is Christianity (Chinua 76). Achebe illustrates several salient features and also...
2 Pages(500 words)Book Report/Review
sponsored ads
Save Your Time for More Important Things
Let us write or edit the essay on your topic "Review of ( Things Fall Apart)" with a personal 20% discount.
GRAB THE BEST PAPER

Let us find you another Essay on topic Review of ( Things Fall Apart) for FREE!