The U.S. Policy toward Native Americans in the 19th Century - Article Example 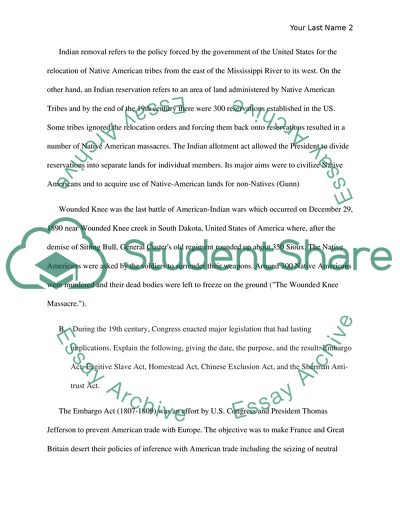 Extract of sample "The U.S. Policy toward Native Americans in the 19th Century"

Final Essay Questions A. Give an overview of the U.S. policy toward Native Americans in the 19th century. Make sure to explain the policies of Presidents Jefferson, Jackson, and Grant. Differentiate between Indian removal, reservations, and allotment. What happened at Wounded Knee; where and when did it occur?
Jefferson, as the governor of Virginia, ordered the moving of the tribes that fought on the British side to the west of the Mississippi River. Jefferson believed that Native American should give up their culture and beliefs to blend in with the Western Europe Culture. The Embargo act was also an effort of Thomas Jefferson. Similarly, President Jackson instigated forced resettlement of Native American tribes from the Southeast to west of the Mississippi River. He ensured the aggressive enforcement of Indian Removal Act. On the other hand, in 1953, President Grant declared that if Native Americans were not forced upon Whites, they would be harmless and his most remarkable activities as President include policies for the protection of African Americans and Native Americans in the West. His policies advocated for their education and wellbeing (Danzinger).
Indian removal refers to the policy forced by the government of the United States for the relocation of Native American tribes from the east of the Mississippi River to its west. On the other hand, an Indian reservation refers to an area of land administered by Native American Tribes and by the end of the 19th century there were 300 reservations established in the US. Some tribes ignored the relocation orders and forcing them back onto reservations resulted in a number of Native American massacres. The Indian allotment act allowed the President to divide reservations into separate lands for individual members. Its major aims were to civilize Native Americans and to acquire use of Native-American lands for non-Natives (Gunn)
Wounded Knee was the last battle of American-Indian wars which occurred on December 29, 1890 near Wounded Knee creek in South Dakota, United States of America where, after the demise of Sitting Bull, General Custers old regiment rounded up about 350 Sioux. The Native Americans were asked by the soldiers to surrender their weapons. Around 300 Native Americans were murdered and their dead bodies were left to freeze on the ground ("The Wounded Knee Massacre.").
B.  During the 19th century, Congress enacted major legislation that had lasting implications. Explain the following, giving the date, the purpose, and the result: Embargo Act, Fugitive Slave Act, Homestead Act, Chinese Exclusion Act, and the Sherman Anti-trust Act.
The Embargo Act (1807-1809) was an effort by U.S. Congress and President Thomas Jefferson to prevent American trade with Europe. The objective was to make France and Great Britain desert their policies of inference with American trade including the seizing of neutral American ships (Frankel 291). However, the act backfired on Americans causing a decline in American economy leading to recession and depression. Exports declined 79.30 percent while the imports declined 58.86 percent (Frankel 294). Therefore, it was abandoned in 1809 without having attained its goal.
Fugitive slave act was passed in 1850 which gave Whites unrestrained power in the capture of African-American and free blacks even after the official end of slavery in New York State in 1827 (Smith 37). The northern reaction against this act was immense almost nullifying its effects. However, it continued to remain legally operative until its repeal on June 28, 1864 by the Congress ("Compromise of 1850").
The Homestead Act, signed by President Abraham Lincoln, was enacted in 1862 which stated that any adult citizen who had never taken arms against the American Government could claim for the ownership of 160 acres of government land. The objective was to give people an incentive to move to sparsely populated areas and to tie the west to the north both politically and economically. The act was framed so vaguely that it seemed to invite scam. Hence, it was ended by The Federal Land Policy and Management Act of 1976 ("Homestead Act 1862").
The Chinese Exclusion Act, signed by President Chester A. Arthur, was approved in 1882 which restricted the Chinese labor immigration into the United States. As a result, only a few non-labor Chinese could enter America under this law after attaining certification from Chinese government. It was passed on the complaints of certain localities that competition from Chinese immigrants was driving down their earnings and posed a threat to their ethnic purity.  This was repealed by the 1943 Magnuson Act after China became an ally of the U.S. in world war two ("Chinese Exclusion Act 1882").
Sherman antitrust act, signed by President Benjamin Harrison, was passed in 1890. It falls under the category of antitrust laws. It prohibited trusts and monopolies, for they concentrate the wealth in few hands, in order to regulate the businesses. Consequently, the vigorous competition gave a big drive to improvement and expansion of the oil industry as a whole ("Sherman Anti-Trust Act 1890").

CHECK THESE SAMPLES OF The U.S. Policy toward Native Americans in the 19th Century

...﻿Cheyenne Native Americans The Cheyenne and other Red Indian tribes were the first occupants of America long before the arrival of white European settlers in the 16th century. Hence, they are referred to as Native Americans. They form a significant plains tribe and belong to the Algonquian Indian family. The Cheyenne comprise of two tribes i.e. the Tsétsêhéstâhese and the Só'taeo'o. Members of the Algonquian family had a common territory (present day Saskatchewan province) and language. However in the mid 16th century, they began their southwestward migration in pursuit of buffaloes and game. However prior to this, the Cheyenne resided...
3 Pages(750 words)Research Paper

...multiple defeats in the battlefield. The war ended with the capturing of Mexico City in September 1847 by the American General, Winfield Scott, and the Mexican administration’s agreeability for further negotiations. The war was particularly painful and disastrous for Mexico, which has to sign away multiple states including California, Utah, New Mexico, and Nevada along with other parts of the country. 3. Manifest Destiny found its origin in the 1840s. The main ideology behind Manifest Destination was regarding the destiny and expansion of America in the 19th century. According to Manifest Destiny, American was destined to stretch its territories from one coast to...
18 Pages(4500 words)Essay

...19th Century America's Affect on Native Americans The 1800's were a tumultuous period in United s history. The population of the United States was increasing. Citizens were looking towards expansion. Portions of the West and Southwest were controlled by Spain and England and the government wanted to hamper any eastward expansion by other nations. The United States government supported the expansion westward. The push was on to the west. The face of Native America would soon be changed forever. Concern over the possibility of European expansion propelled the United States Government to create a...
2 Pages(500 words)Essay

The Native Americans in the 18th and 19th Centuries

...in the 18th and 19th centuries. Throughout these centuries, Native Americans suffered a great deal in the hands of European colonists. Introduction Although there is a common belief that the Native Americans came from Asia, few if any came from India. Mistakenly believing that he had landed in the Indies, Christopher Columbus gave them the name ‘Indian’ (Native Americans para2). Other names accorded to them include Indigenous Peoples of America, Aboriginal Americans, American Indians, Amerindians, and First Peoples First Nations among others. For many...
6 Pages(1500 words)Essay

...judiciary, welfare and cold war. He put the country on a fundamentally different path, as the country was ready for it advocating for accountability of the government operations. He focused into the people feelings by enhancing an optimism. The vision was an accurate portrayal. Liberal Americans lament the Reagans Era, but the conservatives praise it and consider its continuation in the 21st century. Barrack Obama in his campaigns in 2008 acknowledged Regan efforts in changing the nation’s trajectory. He stated that “the country wants a return back to dynamism and entrepreneurship ways that are missing since the Regan era." Regan changed trajectory of America in a way Bill Clinton neither Richard Nixon...
2 Pages(500 words)Admission/Application Essay

...Opposition from Eviction The Cherokees are important people not only because they are part of the human race but also are natives of Georgia in United States. The removal of the Cherokees from their ancestral lands by the United States government has elicited sharp reactions from different quarters. There is controversy and suspicion in the manner in which they were forced out of their ancestral land. Their sovereignty was categorically provided under the ruling by the court in 1832 (Worcester v Georgia) but this was not effected by the government. The government has been adamant in protecting this community and their land. There is a group of Cherokee people that want to stay in their homelands spearheaded by Principal...
4 Pages(1000 words)Essay

...A Comparison of Meriwether Lewis and William Clark’s attitudes toward Native Americans to those expressed by Thomas Jefferson and Andrew Jackson Institution Affiliation Date Thomas Jefferson was an American Exploration while Meriwether Lewis was his personal assistant. Moreover, Jefferson required an assistance officer who would guard them against the American native. Therefore, for this he had William Clark as his army officer. In 1804, Jefferson sent his colleague on a journal to the American interiors.1 They headed to the northwest from St. Louis following the Missouri river.2 However, Jefferson had more or...
2 Pages(500 words)Essay
sponsored ads
Save Your Time for More Important Things
Let us write or edit the article on your topic "The U.S. Policy toward Native Americans in the 19th Century" with a personal 20% discount.
GRAB THE BEST PAPER

Let us find you another Article on topic The U.S. Policy toward Native Americans in the 19th Century for FREE!