Comments (0)
Add to wishlistDelete from wishlist
Cite this document
Summary
These crimes are associated with gangs and come in the form of rape, stealing, homicides, riots, murder among others. These vices not only affect the…
Download full paperFile format: .doc, available for editing
HIDE THIS PAPERGRAB THE BEST PAPER91.7% of users find it useful 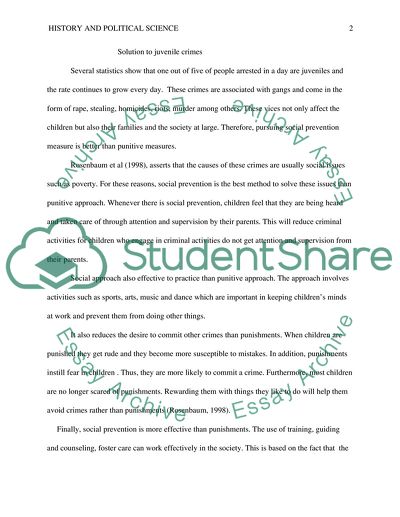 History and political science Solution to juvenile crimes Several statistics show that one out of five of people arrested in a day are juveniles and the rate continues to grow every day. These crimes are associated with gangs and come in the form of rape, stealing, homicides, riots, murder among others. These vices not only affect the children but also their families and the society at large. Therefore, pursuing social prevention measure is better than punitive measures.
Rosenbaum et al (1998), asserts that the causes of these crimes are usually social issues such as poverty. For these reasons, social prevention is the best method to solve these issues than punitive approach. Whenever there is social prevention, children feel that they are being heard and taken care of through attention and supervision by their parents. This will reduce criminal activities for children who engage in criminal activities do not get attention and supervision from their parents.
Social approach also effective to practice than punitive approach. The approach involves activities such as sports, arts, music and dance which are important in keeping children’s minds at work and prevent them from doing other things.
It also reduces the desire to commit other crimes than punishments. When children are punished they get rude and they become more susceptible to mistakes. In addition, punishments instill fear in children . Thus, they are more likely to commit a crime. Furthermore, most children are no longer scared of punishments. Rewarding them with things they like to do will help them avoid crimes rather than punishments (Rosenbaum, 1998).
Finally, social prevention is more effective than punishments. The use of training, guiding and counseling, foster care can work effectively in the society. This is based on the fact that the child understands to distinguish between good and bad things in the society. Hence, it becomes easy for the child to implement the values in daily lives. When these activities are implemented in the society, adults can also benefit from the same.
The “strengthening the family” approach
The “strengthening the family” approach aims to achieve effective parenting in order to prevent problems such as child abuse, neglect among many others. With the implementation of the “strengthening the family” approach, kids have found themselves growing in the most positive way possible. Thus, leading to better families and conducive societies.
This approach reverses the need to have other interventions since it can solve most of the social ills in the society. This is because strengthening the family has made children to be in a position to interact positively with others and communicate their emotions effectively. Children grow with the best behavior leading to positive values in the society.
Those parents who are resilient will lead happy families because they can cope and easily move on from depression, conflict and many other challenges. This in turn helps children acquire positive development. Hence, enable them to solve youth challenges as they grow.
Social Connections as well tend to affect how children can cope with life challenges such as unexpected pregnancies, drug abuse, and use of alcohols. With the availability of good buddies, children develop in the right direction.
The approach also promotes knowledge of parenting, child development and concrete support in times of need. It provides parents with relevant information that regulates raising of the children. In addition, it gives them appropriate expectations for the child behavior. In this case, the child is well taken care of and well behaved to cope with life challenges as they grow.
Reference
Rosenbaum, Dennis P., Arthur J. Lurigio, & Robert C. Davis (1998). The Prevention of Crime: Social and Situational Strategies (1ed.). Belmont, CA: Wadsworth Publishing. Read More
Share:
Tags
Cite this document
(“Summary Essay Example | Topics and Well Written Essays - 500 words - 91”, n.d.)
Summary Essay Example | Topics and Well Written Essays - 500 words - 91. Retrieved from https://studentshare.org/history/1620380-summary

...Summary Content-Based Instruction Can Make ESL Teaching More Efficient in Korea One of the sources used for this essay (Met, 1991) makes an analogy between English study and learning how to play a musical instrument to demonstrate the chancy character of ESL instruction through the common practice of concentrating the lessons on grammar. The language-focused ESL class is compared to a music class that confines its studies to the mastery of musical keys, scales and notes. No meaningful results can be expected from this instructional method if the music students do not get their hands on the musical instrument of their choice and actually play it on a regular basis until they do it right. In the same manner, ESL students...
2 Pages(500 words)Essay
sponsored ads
Save Your Time for More Important Things
Let us write or edit the essay on your topic "Summary" with a personal 20% discount.
GRAB THE BEST PAPER

Let us find you another Essay on topic Summary for FREE!