Comments (0)
Add to wishlistDelete from wishlist
Cite this document
Summary
In the first half of July, Anne Frank and her family decided to go into hiding in a house that eventually also hid other four Dutch Jews that included Hermann, Peter van Pels, Auguste and Fritz Pfeffer. They lived for an approximated two years in a secret house attic behind an…
Download full paperFile format: .doc, available for editing
HIDE THIS PAPERGRAB THE BEST PAPER98.5% of users find it useful 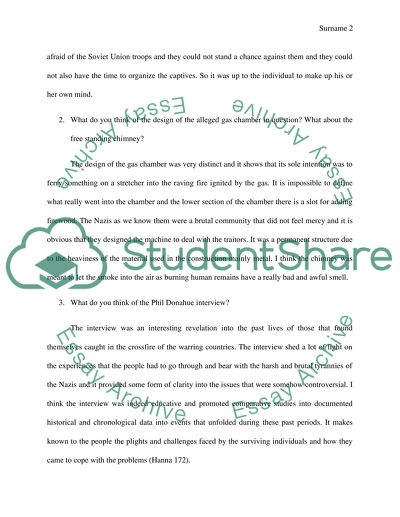 Why were Anne Frank and her sister transported from Auschwitz to Bergen-Belsen?  In the first half of July, Anne Frankand her family decided to go into hiding in a house that eventually also hid other four Dutch Jews that included Hermann, Peter van Pels, Auguste and Fritz Pfeffer. They lived for an approximated two years in a secret house attic behind an office of the family owned business in Prinsengracht Street. On 14th August 1944, German Secret State (Gestapo) police discovered their hiding place after an anonymous tip by a Dutch caller. On the same day, they were all arrested and were sent to Westerbork on August 8th. A month later, September 1944 the Gestapo sent the four brothers and the Frank family on a train to Auschwitz. However, Anne and Margot (her sister) changed course to Bergen-Belsen as they were young individuals and had a lot of energy necessary for labor duties in the context of Gestapo (Hanna 56).
Why were Eli Wiesel and his father given the choice to stay behind in Auschwitz to await liberation by the arriving Soviet troops?
After the arrival of Eli Wiesel and his father to Birkenau Camp, they received orders of assignment to a barrack located the Gypsy Camp. They were miraculously spared death just as they were about to step into the flaming fires that would eventually kill them. The Germans were afraid of the Soviet Union troops and they could not stand a chance against them and they could not also have the time to organize the captives. So it was up to the individual to make up his or her own mind.
2. What do you think of the design of the alleged gas chamber in question? What about the free standing chimney?
The design of the gas chamber was very distinct and it shows that its sole intention was to ferry something on a stretcher into the raving fire ignited by the gas. It is impossible to define what really went into the chamber and the lower section of the chamber there is a slot for adding firewood. The Nazis as we know them were a brutal community that did not feel mercy and it is obvious that they designed the machine to deal with the traitors. It was a permanent structure due to the heaviness of the material used in the construction mainly metal. I think the chimney was meant to let the smoke into the air as burning human remains have a really bad and awful smell.
3. What do you think of the Phil Donahue interview?
The interview was an interesting revelation into the past lives of those that found themselves caught in the crossfire of the warring countries. The interview shed a lot of light on the experiences that the people had to go through and bear with the harsh and brutal tyrannies of the Nazis and it provided some form of clarity into the issues that were somehow controversial. I think the interview was indeed educative and promoted comparative studies into documented historical and chronological data into events that unfolded during these past periods. It makes known to the people the plights and challenges faced by the surviving individuals and how they came to cope with the problems (Hanna 172).
4. Compare the two articles on Bergen-Belsen. What do you conclude as being true?
It is quite difficult to come to a comparative conclusion regarding the Bergen-Belsen articles as they are both very detailed in the information that they introduce to the reader. They provide different perspectives reflecting the state of affairs that concern the Germans and the Soviet Union tug of war. I think that Mark Weber’s article provides a better point of view and also involves using valid information gathered from interviews from the remaining individuals from the events.
Works cited
Hanna Lévy-Hass, Diary of Bergen-Belsen: ReadHowYouWant.com, 2011. 204pages. Read More
Share:
Tags
Cite this document
(“David cole interviews Dr. Franciszek Piper David cole on the Phil Essay”, n.d.)
David cole interviews Dr. Franciszek Piper David cole on the Phil Essay. Retrieved from https://studentshare.org/history/1619872-david-cole-interviews-dr-franciszek-piper-david-cole-on-the-phil-donahue-show

...?[Your full February 25, David Cole Interviews Dr. Franciszek Piper David Cole is the revisionist Jew who has been presenting the story of the homicidal gas chamber from the revisionist perspective in television shows and lectures. Dr. Franciszek Piper is the Director of Archives at the Auschwitz State Museum. In the interview as I understand, Piper affirms that the tourists who come to visit the suspected gas chamber located at the Auschwitz main camp from all countries of the world are made to believe that the chamber is in its original condition. But in fact, it has gone through much reconstruction and renovation by the Soviet after the World War II due to which it now looks like a Nazi gas chamber. Piper reveals that the holes... with...
1 Pages(250 words)Essay

...﻿David Cole Interview of Dr. Piper In David Cole’s interview with Dr. Franciszek Piper, he begins by questioning him about the authenticity of a building that is being exhibited by the guided tours of Auschwitz. He goes on to say that Dr. Piper was one of the primary influences of the revision of the death toll numbers being reduced from 4 million people to 1.1 million. This is horrendous, as the tour guidebook provided states specifically in three different accounts from three different organizations that the number is at minimum 4 million people killed in Auschwitz. This statistic was held by the Soviets until 1989, leaving ample opportunity to create whatever numbers they so desired. Piper says that the gas chamber in question... that...
1 Pages(250 words)Essay

Chinas Consumption And Its National And International Consequences

...David Cole Interviews Dr. Franciscek Piper" My Personal Reaction If there’s anything I know about memory, it’s that it is fallible. How many things over my lifetime have I simply forgotten and don’t even know it? Even my most precious memories are not nearly as accurate as I think they are. Sociologists have done studies about how memories can’t be trusted. I heard of a study once where they showed a bunch of different people the same video then asked each participant simple, basic questions about the video. Each answer they got was different. What color was the runner’s shirt? Some said blue, some said yellow, some said green, etc. The...
2 Pages(500 words)Research Paper

... Response to the film “David Cole Interviews Dr. Franciszek Piper” In this film, Holocaust revisionist David Cole discovers that the gas chamber at the Auschwitz camp in Poland is not in its original state. Through an interview with Dr. Franciszek Piper, he learns that the walls inside the supposed gas chamber were knocked down and the holes in the ceiling were added after World War II in an attempt to re-create the previous appearance of the gas chamber. A tour guide, meanwhile, assists David Cole in the camp and tells him that the chamber is in its original state. The conflicting opinions about the authenticity of the gas chamber confirm David Cole’s argument that the Holocaust story is not what it seems. The film is effective... for...
1 Pages(250 words)Movie Review

...by the Head of Archives, Dr. Piper. 3. The Phil Donahue interview was a show of determination by Cole, who was ready to do anything to get whatever he wanted. It portrays him as a courageous man who stands for what he believes in unless facts prove him otherwise. The interview was an excellent setting with Donahue asking the most relevant questions due to his extensive experience with interviewing people. 4. A lot can be concluded from the two articles on Bergen-Bensel, although both of them have differences. The truth is hard to tell, and the decision to choose on...
2 Pages(500 words)Essay

...Reactions on David Cole Interviews Dr. Franciszec Piper and David Cole on the Phil Donahue Show Anne Frank and her sister were transported from Auschwitz to Bergen-Belsen because they were still strong enough and fit for labor. Unlike other prisoners, Frank and her sister were not killed. This is because they had energy and could still be used as laborers for the Nazi regime. Otherwise, they would have been killed just like the other 549 of their colleagues and children who had been directly sent to the gas chambers for immediate killing since they could not labor....
1 Pages(250 words)Essay
sponsored ads
Save Your Time for More Important Things
Let us write or edit the essay on your topic "David cole interviews Dr. Franciszek Piper + David cole on the Phil Donahue Show" with a personal 20% discount.
GRAB THE BEST PAPER

Let us find you another Essay on topic David cole interviews Dr. Franciszek Piper + David cole on the Phil Donahue Show for FREE!