Comments (0)
Add to wishlistDelete from wishlist
Cite this document
Summary
Specifically, the draft highlighted failures and a litany of crimes committed by James II especially his behavior of undermining citizens’ privileges, for…
Download full paperFile format: .doc, available for editing
HIDE THIS PAPERGRAB THE BEST PAPER97.2% of users find it useful 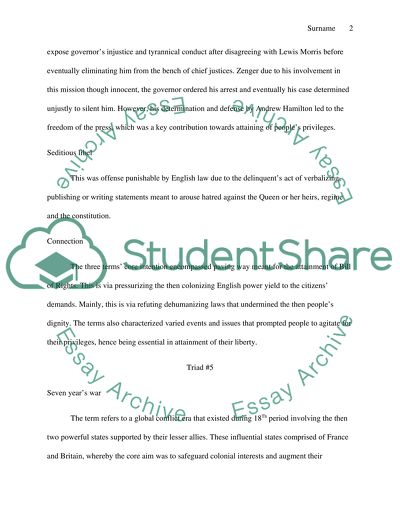 History Triad #4 Declaration of rights 1689 This was a catalogue drafted in 1689 highlighting tyrannical behavior and failings by the then colonial regime. Specifically, the draft highlighted failures and a litany of crimes committed by James II especially his behavior of undermining citizens’ privileges, for illustration, those pertaining to religion, which were contrary to the law. The government also favored catholic clerics by allowing them to act as officers in the state’s standing army. This decision angered numerous citizens especially those belonged to other denominations. The document after submitting to both William and Mary on 13Th February 1689, it later acted as a skeleton meant to draft the bill of rights though there was the elimination of some articles.
John Peter Zenger
This was American-Germany immigrant residing in New York between 1697 and 1746. During his career as a printer, Zenger found himself in a tussle with the then Governor, William Cosby after agreeing to print New York weekly Journal. The newspaper’s intention entailed to expose governor’s injustice and tyrannical conduct after disagreeing with Lewis Morris before eventually eliminating him from the bench of chief justices. Zenger due to his involvement in this mission though innocent, the governor ordered his arrest and eventually his case determined unjustly to silent him. However, his determination and defense by Andrew Hamilton led to the freedom of the press, which was a key contribution towards attaining of people’s privileges.
Seditious libel
This was offense punishable by English law due to the delinquent’s act of verbalizing, publishing or writing statements meant to arouse hatred against the Queen or her heirs, regime and the constitution.
Connection
The three terms’ core intention encompassed paving way meant for the attainment of Bill of Rights. This is via pressurizing the then colonizing English power yield to the citizens’ demands. Mainly, this is via refuting dehumanizing laws that undermined the then people’s dignity. The terms also characterized varied events and issues that prompted people to agitate for their privileges, hence being essential in attainment of their liberty.
Triad #5
Seven year’s war
The term refers to a global conflict era that existed during 18Th period involving the then two powerful states supported by their lesser allies. These influential states comprised of France and Britain, whereby the core aim was to safeguard colonial interests and augment their economic stability. This was via annexing other global states with the intent of ensuring a constant flow of raw materials for their firms. This was a way to augment their global power and domination by having stable economic base.
Sugar Act of 1764
This was a three cent tax Act imposed on colonists by their masters with the intent of increasing revenue. However, colonists refuted the Act citing the England’s regime failed to seek their consent before resulting to this dehumanizing move. The Act debarred rum and French wines importation besides taxing other merchandise, for instance, coffee and indigo.
Revenue Act 1764
This was a law imposed to shun sugar and molasses smuggling in the colonies. It encompassed reducing the previous tax rates and advocating strict collection of duties whose aim entailed augmenting Britain’s revenue.
Connection
The terms refer to the then Britain’s quest of ensuring its economic base stability and global power. This was via using coercion in the form of imposing Acts without seeking colonists’ consent, hence ensuring Britain maximized on collecting adequate revenue meant to stabilize the economy.
Triad #6
Declaration of independence
This was a drafted document by Jefferson whose intention entailed expressing the Americans’ ideals and grievances against the king due to his tyrannical conduct. Its intention was also an affirmation that the then 13 states were no longer part of Britain’s colonies.
John Jay
Besides being a lawyer, Jay offered unselfish sacrifice for his nation in diverse aspects. For instance, he helped in drafting of New York’s constitution besides participating in other varied political reforms like elimination of slavery.
Treaty of Alliance
This was a pact between France and USA whose purpose encompassed guaranteeing military support in case of Britain’s attack in the future.
Connection
The three terms’ connection encompassed US’ breaking away from their colonial masters and ensuring effective measures meant to shun recurrence of its sufferings in future. This is evident from the treaties, which the US signed via its convoys besides drafting constitution. Read More
Share:
Tags
Cite this document
(“History Essay Example | Topics and Well Written Essays - 500 words - 60”, n.d.)
History Essay Example | Topics and Well Written Essays - 500 words - 60. Retrieved from https://studentshare.org/history/1618914-history