Comments (0)
Add to wishlistDelete from wishlist
Cite this document
Summary
The author of the paper gives a detailed information about failed or failing states which have a lack legitimate democratic governments and describes the effective division of labor strategy in the future post-conflict reconstruction projects…
Download full paperFile format: .doc, available for editing
HIDE THIS PAPERGRAB THE BEST PAPER98.4% of users find it useful 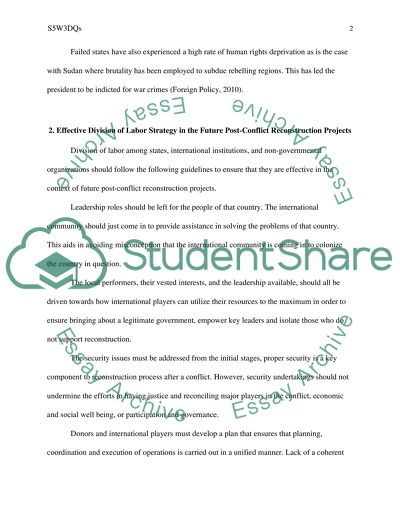 ﻿
1. Failed or Failing States
Failing or failed states are those states that lack legitimate democratic governments, do not have the political will and the military power capable of protecting its territory, and do not have the economic power to sustain its citizens. These weaknesses are mostly caused by religious, racial, and ethnic conflicts (Lecture notes, 2011). There are several indicators (or characteristics) of failing or failed states.
Failed states lack democratic legitimate governments leading to foreign intervention, illegal groups, and high level of refugees, economic decline, and failure by the government to provide the necessary basic services, inequality, violation of human rights and brain drain. Somalia, a country rated as number one failed state in the world, is either controlled by foreign military or by the Al-Shabab militia. Warships from several countries patrol the waters of Somalia to curb the pirates (Kaplan, 2010). It is estimated that about 2 million people have fled Somalia and sought asylum elsewhere (Foreign Policy, 2010). This has also been seen in Afghanistan where the Taliban and foreign troops have more control of the country.
Failing or failed states experience economic decline, this is the case in Zimbabwe and North Korea where tyrannical regimes have stolen money from their economies leaving their markets on a verge of collapse. This has led to inequality with few elites benefiting from the national resources while the majority remains poor. This has also been witnessed in Democratic Republic of Congo and Sudan. In Niger, a country also rated as a failing state, the government cannot provide vital services such as healthcare and education leading to a high illiteracy rate and high infant mortality rates. Zimbabwe has experienced a high rate of brain drain and it is estimated that one out five Zimbabweans has left the country in such of greener pastures.
Failed states have also experienced a high rate of human rights deprivation as is the case with Sudan where brutality has been employed to subdue rebelling regions. This has led the president to be indicted for war crimes (Foreign Policy, 2010).
2. Effective Division of Labor Strategy in the Future Post-Conflict Reconstruction Projects
Division of labor among states, international institutions, and non-governmental organizations should follow the following guidelines to ensure that they are effective in the context of future post-conflict reconstruction projects.
Leadership roles should be left for the people of that country. The international community should just come in to provide assistance in solving the problems of that country. This aids in avoiding misconception that the international community is coming in to colonize the country in question.
The local performers, their vested interests, and the leadership available, should all be driven towards how international players can utilize their resources to the maximum in order to ensure bringing about a legitimate government, empower key leaders and isolate those who do not support reconstruction.
The security issues must be addressed from the initial stages, proper security is a key component to reconstruction process after a conflict. However, security undertakings should not undermine the efforts in having justice and reconciling major players in the conflict, economic and social well being, or participation and governance.
Donors and international players must develop a plan that ensures that planning, coordination and execution of operations is carried out in a unified manner. Lack of a coherent approach and competing among outside players can bring down the concerned government and its entire society and further aggravate the situation.
Military or civilian operations must be devolved from far capitals; they should be based in the home country to avoid failure of the process. Basing military or civilian operation in far capitals can lead to resistance.
The operation should be done in phases and following a particular sequence. The sequence that is chosen should note areas where success can come early; force can be built and consequently maintained.
The international community should develop a strategy with a realistic time period and avoid taking shortcuts in order to achieve reconstruction early (Hamre and Sullivan, 2002).
References
Foreign Policy (2010). Failed States and the Bad Guys Who Keep Them That Way. Foreign Policy 180 (2010): 74+. Global Issues in Context.
Hamre, J. and Sullivan, G. (2002). Toward Post-conflict Reconstruction. The Washington Quarterly
Kaplan, S. (2010). Rethinking State-building in a Failed State. The Washington Quarterly
Lecture notes (2011). Seminar #5: Conflict Resolution and Post-Conflict Reconstruction in the International System & Week #3—Post-Conflict Reconstruction: An Examination of Relevant Approaches and Theories Read More
Share:
Tags
Cite this document
(“Failed States and Effective Division of Labor Strategy in the Future Assignment”, n.d.)
Failed States and Effective Division of Labor Strategy in the Future Assignment. Retrieved from https://studentshare.org/history/1611858-s5w3dqs

“Failed States and Effective Division of Labor Strategy in the Future Assignment”, n.d. https://studentshare.org/history/1611858-s5w3dqs.
Comments (0)
Click to create a comment or rate a document

Markets and Division of Labor

...economic benefit and division of labour does not completely serve as the solitary cornerstone that can keep the society on a single platform. Rather, an array of shared values, principals, ethics, and devotion to collective goals are the fundamental aspects that attribute to not only developing and increasing social cohesion but contribute to its sustainability (Wood, 1998). According to quite a few theorists, the division of labour exhibits the piece of information that the shared functional correlation becomes the new practice that the division of labor creates, instead of collective scruples and ethics. This happens when the societies have a transformation into the...
10 Pages(2500 words)Essay

...States election and especially the 2008 elections that pitted president Obama against senator McCain2. The nation has found itself in a reconstruction program in both Afghanistan and Iraq in the aftermath of its anti-terrorism missions in the said countries. Elsewhere, there have been various peace-building projects, national building programs, political mediations and other post war and conflict reconstruction programs that are being undertaken by international bodies like the United Nations and other regional or supranational agencies. However, such efforts have not always been smooth and have been met with a lot of challenges both of...
15 Pages(3750 words)Research Paper

...that are performed in isolation. This is a factor that increases the level of stress among most women in the United States. However, when men do household chores, this tends to be the infrequent and optional tasks; these are more likely fun-filled activities such as playing with children or cooking for fun. On account of gendered division of labor in crop production, men and women have different roles to play and this ranged from one region to another and on different communities too. It is usually men who do the plowing while women concentrate on weeding, applying of fertilizer and harvesting. Additionally, men tend to concentrate on large scale farming with highly mechanized tools...
3 Pages(750 words)Essay

...empowering women to own property. A property right in regard to women is fast coming up, being viewed as a great boost to societal economic upgrade. Women are now finding their way up in the ladder to equality. However, this is being viewed as an abuse to men and cultural beliefs hence it is not being easily accepted. With the new laws on women rights and property ownership, women are not finding easy to break through the societal norms. This is eventually creating havoc family relationships and even leading to breakups, where men feel their duties are being intruded. Gender division of labor and property ownership affects subsistence strategies in the society. Subsistence...
3 Pages(750 words)Essay

The Shifting Status of the American Empire: A historical Overview

...economic might to buy or influence activities in other countries. Driving American expansion, said Rupert, was the ability of large American manufacturing firms to penetrate foreign markets, reshape the global division of labor and set new standards of productivity and competitiveness across the world.11 Michael Hudson points out that the United States “emerged from the war not only as the world’s major creditor, but a creditor to foreign governments with which it felt little brotherhood.”12 After World War II, only the United States possessed the foreign exchange necessary to undertake substantial overseas investments. Laissez faire ideology, which is a French...
12 Pages(3000 words)Essay

The Division of Labor

...that are needed to perform at that level therefore what is being exchanged becomes more important to who is exchanging. Social division of labor is characterized by complexities in the social hierarchy and traditions in any cultural production that is focused towards development and often results in conflicts. These conflicts basically comprise of developmental issues and ideological contradictions which arise due to disparate social exchanges, promoting social stratification on the basis of class, race and culture. Within a wider spectrum of social issues which focus on division of labor, conflicts arise because of...
2 Pages(500 words)Essay

...to plan and utilize all the available capabilities and sustainable resources within the community. According to Hayles (2010 p.104), having an understanding of the urban context with respect to economics, geography, politics, society, hazards and the climate is the key to the development of an appropriate strategy for shelter reconstruction. Physical, environmental and socioeconomic constraints of a situation are critical in identifying the most effective methodological approach for post-disaster shelter reconstruction in urban environment. According to Nie-Jia et al (2014 p.170), assessment should incorporate as many stakeholders and data sources as...
12 Pages(3000 words)Coursework

...Smith: The division of labour ... is not originally the effect of any human wisdom ... It is the necessary, though very slow and gradual consequence of the propensity to truck, barter and exchange one thing for another,” Early Writing 369. On the other hand, bureaucratic division of labor refers to the breakdown of a specific task into component parts in which case different people are assigned to work on the different parts of each task. Bureaucracy is the process of carrying out community action into rationally ordered actions, and as such, division of labor provides an exquisite avenue for appropriate rationalization of tasks....
2 Pages(500 words)Essay

The Life Cycles of Failed Projects

...of failure in an IT project (“The Life Cycles of Failed Projects” 1). Pushing back of the project development has proved to be a key sign of failure. The article states that most the IT projects start ahead of schedule. In fact, others have had to start three years ahead of schedule. Another constraint is that of changes in budget where in most cases the project budget has had to be increased. These two features have been very critical to the failure of IT projects (“The Life Cycles of Failed Projects” 1). In order to provide a clear view of the evolution of most IT...
3 Pages(750 words)Essay
sponsored ads
Save Your Time for More Important Things
Let us write or edit the assignment on your topic "Failed States and Effective Division of Labor Strategy in the Future Post-Conflict Reconstruction Projects" with a personal 20% discount.
GRAB THE BEST PAPER

Let us find you another Assignment on topic Failed States and Effective Division of Labor Strategy in the Future Post-Conflict Reconstruction Projects for FREE!