HISTORY - choose 1 of the questions to answer - Essay Example

Comments (0)
Add to wishlistDelete from wishlist
Cite this document
Summary
The country took possession of Texas, in 1845, annexed Oregon south of 49° north latitude in an agreement with Great Britain, in 1846, and acquired and conquered New Mexico and…
Download full paperFile format: .doc, available for editing
HIDE THIS PAPERGRAB THE BEST PAPER95.6% of users find it useful 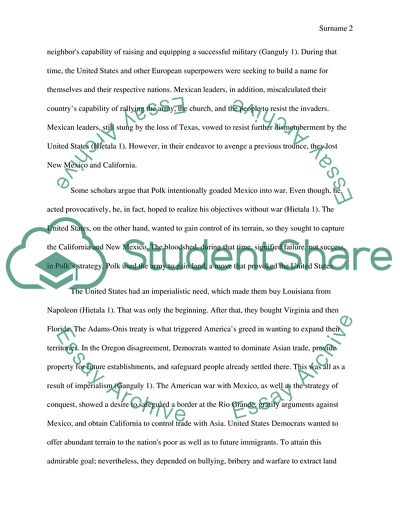 Extract of sample "HISTORY - choose 1 of the questions to answer"

History 3) Was the Mexican War an imperialistic venture by the United s? Why, given the expansionist sprit of the aged did the United States not seek to acquire all of Mexico?
The United States witnessed its most quick territorial expansion during the mid-1840s (Hietala 1). The country took possession of Texas, in 1845, annexed Oregon south of 49° north latitude in an agreement with Great Britain, in 1846, and acquired and conquered New Mexico and California in the United States-Mexican War. The country also gained numerous cessions from Native American communities, which were moved to unwanted and remote regions. This process started in the 17th century (Hietala 1). This paper will discuss whether the Mexican War an imperialistic venture by the United States or not. It will also talk about whether the United States planned to expand its territories to Mexico during the expansionist sprit of the aged.
The Mexican war, according to Hietala (p1), was an imperialistic venture by the United States. Both Mexico and the United States overestimated their affairs in 1846. Contemptuous of Mexicos administration and defense force, Polk and his consultants tried to overawe Mexican officials into surrendering California along with other provinces to the U.S. to pay outstanding debts owed to United States citizens. Mexico, for its part, went wrong in assessing its northern neighbors capability of raising and equipping a successful military (Ganguly 1). During that time, the United States and other European superpowers were seeking to build a name for themselves and their respective nations. Mexican leaders, in addition, miscalculated their country’s capability of rallying the army, the church, and the people to resist the invaders. Mexican leaders, still stung by the loss of Texas, vowed to resist further dismemberment by the United States (Hietala 1). However, in their endeavor to avenge a previous trounce, they lost New Mexico and California.
Some scholars argue that Polk intentionally goaded Mexico into war. Even though, he acted provocatively, he, in fact, hoped to realize his objectives without war (Hietala 1). The United States, on the other hand, wanted to gain control of its terrain, so they sought to capture the California and New Mexico. The bloodshed, during that time, signified failure, not success, in Polk’s strategy. Polk used the army to gain land, a move that provoked the United States.
The United States had an imperialistic need, which made them buy Louisiana from Napoleon (Hietala 1). That was only the beginning. After that, they bought Virginia and then Florida. The Adams-Onis treaty is what triggered America’s greed in wanting to expand their territories. In the Oregon disagreement, Democrats wanted to dominate Asian trade, provide property for future establishments, and safeguard people already settled there. This was all as a result of imperialism (Ganguly 1). The American war with Mexico, as well as the strategy of conquest, showed a desire to safeguard a border at the Rio Grande, gratify arguments against Mexico, and obtain California to control trade with Asia. United States Democrats wanted to offer abundant terrain to the nations poor as well as to future immigrants. To attain this admirable goal; nevertheless, they depended on bullying, bribery and warfare to extract land from Mexicans and Native Americans (Hietala 1). Often naive, they were also materialistic and racist. Their pride had to make them steal land from its neighbors, and Mexico was the best option.
Work Cited
Ganguly, Poushali. Mexican American War. N.p, 2010. Web. Hietala, Thomas. Expansionism and Imperialism. N.p, 2006. Web. Read More
Share:
Tags
Cite this document
(“HISTORY - choose 1 of the questions to answer Essay - 2”, n.d.)
Retrieved from https://studentshare.org/history/1611222-history-choose-1-of-the-questions-to-answer

(HISTORY - Choose 1 of the Questions to Answer Essay - 2)
https://studentshare.org/history/1611222-history-choose-1-of-the-questions-to-answer.

“HISTORY - Choose 1 of the Questions to Answer Essay - 2”, n.d. https://studentshare.org/history/1611222-history-choose-1-of-the-questions-to-answer.
Comments (0)
Click to create a comment or rate a document

...to the Western perspective -- China stresses the importance of state power over people power. Moreover, the Hero film reflects, at certain degree, the national cinema in China. In Yimou’s movie, the narrative somehow depicts the minds or visions of particular Chinese directors and other people characterized in the Chinese movie-making: unity or nationalism. As it appears, Yimou poses as a nationalist filmmaker by choosing a movie narrative that reinforces the imperative for national unity. It is noteworthy that the over-all theme of the Hero movie is the need for people to support a unitary government. This is evidently a Chinese tradition, namely, the subordination to the superiors. The Confucian politics dictates the...
2 Pages(500 words)Essay

... History 2) What were the circumstances leading up to the provision of the Compromise of 1850? What issues did the compromise of 1850 leave unsettled, explain?  The Compromise of 1850 referred to a package of five bills, put to law in the United States on September 1850 (Baxamusa 1). The Compromise resolved a four-year disagreement between the free states of the North and the slave states of the South concerning the status of boundaries obtained during the American-Mexican War (1846–1848). The law, planned by Whig Senator Henry Clay of Kentucky and brokered by Democrat Stephen Douglas and Clay, shunned away from secession or civil war and eased sectional disagreement for four years in the United States. This paper will talk about... , the...
4 Pages(1000 words)Essay

Impact of Diversity on Racism

...Essay Questions The Reconstruction period starting from 1865 to 1877 refers to the period following the American Civil War. Attempts were made by the federal government so as to introduce amendments in order to address the inequities of slavery and to bring the 11 southern states back into the Union that had previously pulled away at or before the Civil War. Contingent military governors were appointed by Abraham Lincoln in the reclaimed southern states in 1862. These governors were put in place to resume government in the reacquired areas. Among the most central condition for these states was that an oath of allegiance will have to be taken by a minimum of 10 percent of the voting population. However, Lincoln’s...
5 Pages(1250 words)Essay

...1. How did the distinctive ecological differences of the four River Valleys affect their economic activity? All four river valleys provided the same essential ingredients for successful civilization development namely an abundance of water, a fertile soil caused by the sediment which caused silt for planting crops, a predictable and mild climate, and the advantage of a protective barrier against invasion. In Mesopotamia the two rivers Tigris and Euphrates formed what is known as the “fertile crescent”. The rivers provided also a trade route for ships. Each river area provided a certain type of crops which became useful for the civilizations around them, whether papyrus in Egypt or rice in China etc. 2. How did environmental... are not known...
18 Pages(4500 words)Essay

...Question Why of All the Reform Movements did Abolitionism Prove to be the most Divisive Abolitionism has proven to be the most divisive reform movements as compared to other reform movements. This is because it was the movement geared to abolish slavery both in the Northern and Southern States. In the nineteenth century and early twentieth century, slavery was the key cause of righteous anger to reform minded Americans (Ferrell 41). Slavery deprived some people, particularly the blacks, their human rights, and even separated their families. Therefore, in order to oppose non-humanitarian actions and slavery, abolitionism was the way forward. The need to abandon slavery began in the Northern States with the support of the...
2 Pages(500 words)Essay

...History 5) Assume the role of northern politician in 1860. Give evidence of how a proslavery conspiracy has captured the Democratic Party and why you are voting for Abraham Lincoln for president. The presidential election of 1860 was one of the most conflict-ridden in the United States history. The result of the election openly brought about the secession of seven states and eventually, the American Civil War (Peck 34). Abraham Lincoln, the Republican presidential contender, only obtained a meager 39% of the popular votes. Nevertheless, the votes Lincoln got were enough to thrust him to the government as there was a split in the Democratic Party. Slavery was a noteworthy subject of the Election of 1860....
2 Pages(500 words)Essay

...History 7) Discuss the impact of technology on the Civil War. Why did generals on both sides fail to adapt quickly? To what extend did this contribute to the massive loss of life on the both sides? The American Civil War is regarded by critics as the first of its kind with regards to modern wars (Adams 1). One of the noteworthy evolutions of warfare during that time was in the area of technology, particularly the fielding of the rifles as well as use of the Minie ball. This article will discuss the impact of technology on strategies in the American Civil War. As the United States Army fought the Mexican War, soldiers were given the smoothbore musket as their main arms weapon of the infantry (Adams...
2 Pages(500 words)Essay

Choose two anthropology questions in this six questions and answer

...Anthropology Questions #3 Also known as the hajj, the pilgrimage to Mecca takes place every year. The pilgrimage can be said to be a rite of passage since most Muslims consider it as a crucial part of their religious beliefs. The reason for taking this pilgrimage is to ensure that a person finds him or herself. It also serves to fulfill a longing desire that a person may be having. In the Islamic religion, the hajj is considered to be of significant importance to both the person undertaking it and their religion. The hajj is the fifth pillar of Islamic religion and every Muslim who can afford the trip to Mecca ought to go there at least once in their lifetime. As a rite of passage, hajj represents a change in faith as...
1 Pages(250 words)Assignment
sponsored ads
Save Your Time for More Important Things
Let us write or edit the essay on your topic "HISTORY - choose 1 of the questions to answer" with a personal 20% discount.
GRAB THE BEST PAPER

Let us find you another Essay on topic HISTORY - choose 1 of the questions to answer for FREE!