2. What were the greatest achievements of the Italian Renaissance Explain your answer with reference to at least three works of art or literature - Essay Example

Comments (0)
Add to wishlistDelete from wishlist
Cite this document
Summary
The Italian Renaissance is a pivotal period in European history whose beginnings can be traced to Florence, a city that attracted some of the greatest artists of that era. It began at a point in time when artists looked to the antique Greek and Roman period for inspiration…
Download full paperFile format: .doc, available for editing
HIDE THIS PAPERGRAB THE BEST PAPER97.9% of users find it useful 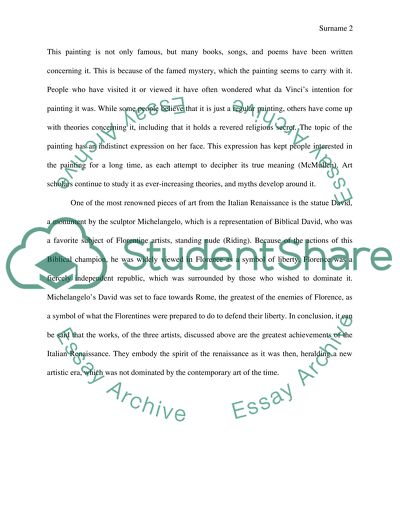 Extract of sample "2. What were the greatest achievements of the Italian Renaissance Explain your answer with reference to at least three works of art or literature"

Achievements of the Italian Renaissance The Italian Renaissance is a pivotal period in European history whose beginnings can be traced to Florence, a city that attracted some of the greatest artists of that era. It began at a point in time when artists looked to the antique Greek and Roman period for inspiration. These artists went against what was considered the norm during the Middle Ages, choosing instead to find inspiration in the works of what they considered having been the illustrious period. It was during the Italian Renaissance that some of the furthermost creations of art in the world today were made. Artists such as Leonardo da Vinci, Raphael, and Michelangelo thrived during this period, their works being considered masterpieces to this day. The works of the trio form the backbone of the Italian Renaissance and some of these shall be considered in this essay.
One of the best-known works of the Italian Renaissance, and what can be considered one of its best accomplishments, is the fresco The Triumph of Galatea. This is a masterpiece by Raphael, which he painted for the Villa Farnesina, and is based on Greek mythology (Bruce 346). It is a depiction of how the Nereid Galatea became involved in a love situation with a shepherd. While this fresco is based on the mythology, it depicts a sight where Galatea is surrounded by humanoid sea creatures. This fresco is deemed one of Raphael’s supreme masterpieces whose meaning has been subject to speculation for a long time. The second, and perhaps the most well-known, work of art of this period is Mona Lisa, by Leonardo da Vinci. This painting is not only famous, but many books, songs, and poems have been written concerning it. This is because of the famed mystery, which the painting seems to carry with it. People who have visited it or viewed it have often wondered what da Vinci’s intention for painting it was. While some people believe that it is just a regular painting, others have come up with theories concerning it, including that it holds a revered religious secret. The topic of the painting has an indistinct expression on her face. This expression has kept people interested in the painting for a long time, as each attempt to decipher its true meaning (McMullen). Art scholars continue to study it as ever-increasing theories, and myths develop around it.
One of the most renowned pieces of art from the Italian Renaissance is the statue David, a monument by the sculptor Michelangelo, which is a representation of Biblical David, who was a favorite subject of Florentine artists, standing nude (Riding). Because of the actions of this Biblical champion, he was widely viewed in Florence as a symbol of liberty. Florence was a fiercely independent republic, which was surrounded by those who wished to dominate it. Michelangelo’s David was set to face towards Rome, the greatest of the enemies of Florence, as a symbol of what the Florentines were prepared to do to defend their liberty. In conclusion, it can be said that the works, of the three artists, discussed above are the greatest achievements of the Italian Renaissance. They embody the spirit of the renaissance as it was then, heralding a new artistic era, which was not dominated by the contemporary art of the time.
Works Cited
Bruce, Donald. "Raphael at the National Gallery." Contemporary Review 2004: 346-51.
McMullen, Randy. "People: Historian Says Da Vinci used Man as Main Model for Mona Lisa." Oakland Tribune. Feb 03 2011.
Riding, Alan. "Michelangelos Secrets are no Longer Secret." New York Times. Mar 29 2006. Read More
Share:
Tags
Cite this document
(“2. What were the greatest achievements of the Italian Renaissance Essay”, n.d.)
Retrieved from https://studentshare.org/history/1609638-2-what-were-the-greatest-achievements-of-the-italian-renaissance-explain-your-answer-with-reference-to-at-least-three-works-of-art-or-literature

(2. What Were the Greatest Achievements of the Italian Renaissance Essay)
https://studentshare.org/history/1609638-2-what-were-the-greatest-achievements-of-the-italian-renaissance-explain-your-answer-with-reference-to-at-least-three-works-of-art-or-literature.

“2. What Were the Greatest Achievements of the Italian Renaissance Essay”, n.d. https://studentshare.org/history/1609638-2-what-were-the-greatest-achievements-of-the-italian-renaissance-explain-your-answer-with-reference-to-at-least-three-works-of-art-or-literature.
Comments (0)
Click to create a comment or rate a document

CHECK THESE SAMPLES OF 2. What were the greatest achievements of the Italian Renaissance Explain your answer with reference to at least three works of art or literature

...exemplify the Mannerist style. (Fletcher, 2000, p.347) High Renaissance art works feature complexity and richness of detail. Human expressions, gestures, postures and figures are paid great deal of attention and detail. Even minor painters of the time such as Mariotto Albertinelli and Fra Bartolomeo excelled in these aspects of visual composition. Other emblems of this genre are its iconographic references to Hellenistic art and mythology. Harmony of design and technical excellence are other notable features of High Renaissance art. (Stokstad, 2005, p.115) The aspiration for a painting that depicts the soul and for a...
5 Pages(1250 words)Term Paper

...? Three Impressionist works of Art al Affiliation) Impressionism art was introduced in 1874 in France by unknownindividuals who are associated in art that is painting, sculpturing and print making among others. It is a movement which tried to be independent though they incurred opposition in the early years but managed to launch it. The main inspiration to Impressionism is from Claude Monet painting Impression, sunrise which is also the main core of their art (Thomson, 2000). This name is from Louis Leroy who criticized Claude’s painting on the ground that it was sketchy, unfinished and termed it as Impression. This type of...
5 Pages(1250 words)Assignment

...of Adam, his interest on the beauty and elegance is apparent. His poetry also reflects his belief in the divine origin of beauty. But through time and the influence of the Roman Catholic Church, Michelangelo lost his interest in physical beauty and no longer believed in its representation of spiritual excellence. Later painting shows more Christian representation loosing detail and grace. He eventually fully lost his interest and decided to no longer paint becoming guilty of his love for physical beauty. In a way this was the end of neo-Platonism for Italian renaissance art. 2. The common denominator among Della Francesca, Alberti and Mantegna are their...
4 Pages(1000 words)Essay

...translation of the Bible. However, the literary and philological programmes connected with the Italian Renaissance resulted in a different perspective of the Scripture. "It was seen as the literary embodiment of an experience, which could be, at least in part, recreated through appropriate interpretive manners." (McGrath 1995, P. 230). Therefore, the dawn of s historical perspective, the growth of a critical approach to Scriptures and the change in meaning of the term 'Church' were essential in the transformation of the theological perspectives in Christian thinking and the role played by the Renaissance thoughts and thinkers, in this regard, cannot be...
12 Pages(3000 words)Essay

...for this work is flowers. As discussed above, these art works do not tell any particular story or make viewers confused with deep visual presentations. 2. A full body is beautiful too A full body is beautiful too is an artistic work of Noopur Goel. This art includes some contrasting plates that represent some eating disorders. The full figured drawing depicts the people’s modern eating habits and concerns. Here, the artist tries to link eating disorders to certain unhealthy modern lifestyle practices. In the art, one plate shows the name of an eating disorder- anorexia nervosa- which is becoming more prevalent in...
2 Pages(500 words)Assignment

...Italian Renaissance Introduction and thesis The following discussion seeks to evaluate the Italian renaissance as argued upon by multiple reliable sources. Contextually, the renaissance was viewed as a rebirth to the then social activities. History depicts that the period started in the 13th century and continued to the early 16th century. During this period, many changes were implemented in the society that led to the evolution of various disciplines. In emphasis, most of the works implemented by the ancient Italian icons are still valuable to the society as they serve to the improvement of the human...
7 Pages(1750 words)Research Paper

...that all matters fall at the same rate of hurrying. He also built a dominant telescope that was used to demonstrate that the Earth and other planets rotated around the source of light (sun) and not, as spiritual establishment argued differently (Campbell & Cole, 19). Difference between Florence Rome and Venic There was a big different between vineci and Florence Rome’s pictures. The Madonna and Child of Masaccio with that of Titians, have a numeral of attractive differences. The intellectual Florentines were mainly concerned in shape, volume and space; they used color only to differentiate one area from another, each area being obviously bounded by an outline. Florentine pictures could be regarded simply as colored...
5 Pages(1250 words)Essay

8 Pages(2000 words)Assignment
sponsored ads
Save Your Time for More Important Things
Let us write or edit the essay on your topic "2. What were the greatest achievements of the Italian Renaissance Explain your answer with reference to at least three works of art or literature" with a personal 20% discount.
GRAB THE BEST PAPER

Let us find you another Essay on topic 2. What were the greatest achievements of the Italian Renaissance Explain your answer with reference to at least three works of art or literature for FREE!