Comments (0)
Add to wishlistDelete from wishlist
Cite this document
Summary
The essay "The Ancient Art Analysis" contains the comparison and contrast of the seated Buddha on the Lion Throne and Indra and Surya. The writer of this essay also analyzes a four-ram Fangzum, the Reliquary Buddhist Stupa, the Bowl, and Inlaid Mirror at the Lineage Tomb…
Download full paperFile format: .doc, available for editing
HIDE THIS PAPERGRAB THE BEST PAPER92.5% of users find it useful 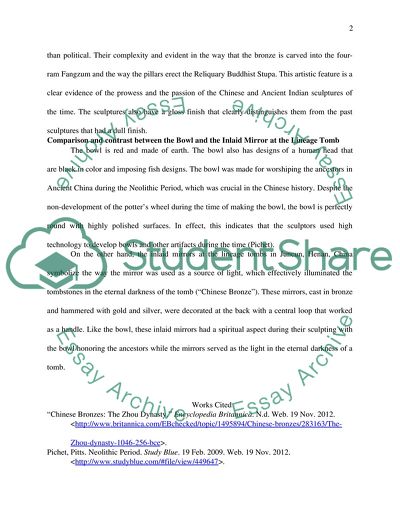 ﻿Ancient Art Analysis
Comparison and contrast of the seated Buddha on the Lion Throne and Indra and Surya
The seated Buddha on the Lion Throne and the sculpture of Indra and Surya play a significant role in the Indian history. As depicted in the picture, the two images present a primary figure, Buddha, who is believed to have immense power in the Indian culture. The two sculptures are significant in both the political and spiritual powers. The symbol of the lions represents courage and supremacy in relation to another inferior culture or political group.
The difference in the making of these two sculptures is that, unlike in the Seated Buddha on the Lion Throne, the Buddha on Indra and Surya is not represented as a human form until later dates. In addition, the Indra and Surya are engravings as depicted in this picture. Nonetheless, the two sculptures are a depiction of the final existence and the past lives the Buddhism founder, Siddhartha Gautama. The size of the sculptures is also similar as it ranges from 50 to 200 feet in height.
Comparison and contrast between the four-ram Fangzum and the Reliqaury Buddhist Stupa
The four-ram Fangzum is a bronze cast sculpture while the Reliqaury Buddhist Stupa is cast in gold. The two sculptures have a great significance in the culture of the Chinese and the Indians respectively. These two sculptures depict the respect given to the dead, and especially to sages and religious teachers. However, there is a great difference in the age of their molding with the four-ram fan zun cast in the second Millennium BCE, during the era of the Shang dynasty with the Reliqaury Buddhist Stupa cast in the 3rd century CE, which was during the Kushan dynasty.
The two sculptures are also a symbol of commemorating significant occurrences in the Chinese and Indian religion. Hence, their main subject or significance is more of spiritual beliefs than political. Their complexity and evident in the way that the bronze is carved into the four-ram Fangzum and the way the pillars erect the Reliquary Buddhist Stupa. This artistic feature is a clear evidence of the prowess and the passion of the Chinese and Ancient Indian sculptures of the time. The sculptures also have a gloss finish that clearly distinguishes them from the past sculptures that had a dull finish.
Comparison and contrast between the Bowl and the Inlaid Mirror at the Lineage Tomb
The bowl is red and made of earth. The bowl also has designs of a human head that are black in color and imposing fish designs. The bowl was made for worshiping the ancestors in Ancient China during the Neolithic Period, which was crucial in the Chinese history. Despite the non-development of the potter’s wheel during the time of making the bowl, the bowl is perfectly round with highly polished surfaces. In effect, this indicates that the sculptors used high technology to develop bowls and other artifacts during the time (Pichet).
On the other hand, the inlaid mirrors at the lineage tombs in Juncun, Henan, China symbolize the way the mirror was used as a source of light, which effectively illuminated the tombstones in the eternal darkness of the tomb (“Chinese Bronze”). These mirrors, cast in bronze and hammered with gold and silver, were decorated at the back with a central loop that worked as a handle. Like the bowl, these inlaid mirrors had a spiritual aspect during their sculpting with the bowl honoring the ancestors while the mirrors served as the light in the eternal darkness of a tomb.
Works Cited
“Chinese Bronzes: The Zhou Dynasty.” Encyclopedia Britannica. N.d. Web. 19 Nov. 2012.
.
Pichet, Pitts. Neolithic Period. Study Blue. 19 Feb. 2009. Web. 19 Nov. 2012.
. Read More
Share:
Tags
Cite this document
(“The Ancient Art Analysis Essay Example | Topics and Well Written Essays - 500 words”, n.d.)
Retrieved from https://studentshare.org/history/1608904-please-read-the-question-and-check-the-pictures-and-compare-together-answer

CHECK THESE SAMPLES OF The Ancient Art Analysis

...?Ancient Artistic Issue Table of Contents Introduction 3 Thesis ment 3 Cycladic Art: A Storehouse of Symbolic Artifices 4 Conclusion 8 References 9 Introduction Ancient Greek art and architecture is marvellous and ephemeral from the aspect of its unparallel and indelible creativity. Ancient art of the Aegean is generally referred to the art that had evolved within the Grecian lands surrounded by the islands which fall within the Grecian sea. It is quite worthy to be mentioned in this context that Aegean art is a form of Mycenaean art. The Aegean art is famous for some of...
5 Pages(1250 words)Research Paper

... literature designates on how culture and social aspects continue to influence architecture since the ancient times to this contemporary civilization. Thus, it is rational to assert that, cultural and social context heavily impact on the idea generation process of an architect. Thus, it is prudent for the community to uphold the cultural and social factors as the factors partake a pivotal role towards enhancing and developing a man with rational intellect with regards to architectural work. Reference List Sharma, Janhwij. 2003. Ladakh: architectural heritage. New Delhi: Indian National Trust for Art and Cultural Heritage in association with Har-Anand Publications.... relationship to the contiguous views. As the occupants traverse these...
4 Pages(1000 words)Research Paper

...The aim of this paper is to compare and contrast two works from any ancient culture and compare and contrast them in terms of style, meaning, symbolism and other aesthetic features. The first is Aphrodite Untying Her Sandal is a small bronze statue located in the Roman Imperial period maybe in the first century CE. It is a Roman replica of a famous work of Praxiteles in the Hellenistic period. The second work is The Tyche of Antioch, also a bronze statue located in the first to second century CE in Syria, during the Roman Period. Sculpted by Tartus it is also a Roman replica of the work of the Greek sculptor Eutychides of Sikyon. The statues being both Roman replicas represent goddesses. Aphrodite is most probably an...
2 Pages(500 words)Essay

...Analysis and Comparison Between the Doryphoros and the Augustus of Primaporta The Doryphoros of Polyclitus is estimated to have been produced sometime in the 5th century B.C. The statue of Augustus of Primaporta dates back to the first century B.C. and was commissioned directly be Augustus Ceaser. This second statue shows a strong influence from the first; the similarities as important as the differences. This paper will examine the form, subject, and content contained in these works. Through a close analysis of these points, one can discover the artistic and social intent represented within both figures. The Doryphoros of Polyclitus (also known as Polykleitos) reveals a direct influence of...
3 Pages(750 words)Essay

...Ancient Art Forms College From the ancient times to humans have been using art as a way of expressing difference on how they live, how they perceive the world and any other concepts in life that can be expressed through art. Ancient art forms from the great civilizations such as the Greek and the Roman empires have been preserved in some of the world’s largest museums such as the Louvre museum, the Smithsonian Institution Freer Gallery and Sackler Gallery, and the Metropolitan Museum of Art. I am going to pick two ancient art forms from each of the three museums, compare and contrast them and give a detailed explanation of them (Polit 67). Starting with the metropolitan museum I will look at the Statuette of an African also known... caves...
2 Pages(500 words)Essay

... Ancient and medieval art Reserve Head of Nofer, Giza tomb G 2110A, Dynasty 4, 2602-2575 BCE, 10 11/16” high (Second floor, Old Kingdom Egyptian gallery off rotunda, look for one of the white heads in a glass case 06.1886; Map: orange, gallery 207. It is difficult to know exactly how Nofer looked like but from the reserve head found in tomb at Giza, it can be argued that Nofer had large aquiline nose. This element is featured on the door-jump of his chapel and on the reserve head found at the base of his burial pit or tomb. From the reserve head, Nofer is presented as a huge and big person who did not belong to the royal family but played a significant role in the fourth dynasty in Egypt. For example, he was given titles... and powerful...
5 Pages(1250 words)Essay

Dj vu: An Analysis of Early Egyptian Art through the Prism of Art Development and History

...Section Déjà vu: An Analysis of Early Egyptian Art through the Prism of Art Development and History Oftentimes the realm of art and artistry is open to a degree of egoism with regards to the fact that artists and scholars alike consider the changes in art experienced within the past several hundred years are somehow unique from the evolution that art has taken in prior thousands of years of human history and development. However, this is indeed not the case. The article in question, Souren Melikian’s “Art Review: The Roots of Art in Ancient Egypt”, helps to display an alternate...
2 Pages(500 words)Essay

...Ancient Art al Affiliation The first part of the assignment required researching from three websites of different museums for ancient art: (1) The Metropolitan Museum of Art; (2) The Louvre Museum; and (3) The Smithsonian Institution Freer Gallery and Sackler Gallery. The second part required the writing of a comparative analysis of two works of ancient art found from any of the museums to include relevant terminologies and concepts learned from the module, including materials used, style, meaning, symbolism, and any other aesthetic issues. Finally, the third part would provide an explanation on the...
2 Pages(500 words)Research Paper

Analysis of Art Objects from Ancient Egypt and Ancient Rome

...﻿Analysis of Art Objects from Ancient Egypt and Ancient Rome Outline Introduction Description of ancient art as a form of preserving culture. Then the paper introduces the two topics that will be discussed in the paper, i.e. art objects from ancient Rome and ancient Egypt. The paper looks into the Roman culture and belief in the afterlife through studying the Colosseum; the paper then explores the Great Pyramid of Khufu to uncover ancient Egyptian belief in eternal life after death. Discussion This part introduces the two art objects- the Colosseum and...
5 Pages(1250 words)Essay
sponsored ads
Save Your Time for More Important Things
Let us write or edit the essay on your topic "The Ancient Art Analysis" with a personal 20% discount.
GRAB THE BEST PAPER

Let us find you another Essay on topic The Ancient Art Analysis for FREE!