Comments (0)
Add to wishlistDelete from wishlist
Cite this document
Summary
Florida was the first frontier of Europe in the North American continent, with its permanent settlement by Europeans dating back to more than four centuries. The Spanish city of St. Augustine had been established in Florida by the sixteenth century. An expedition directed by an…
Download full paperFile format: .doc, available for editing
HIDE THIS PAPERGRAB THE BEST PAPER95.2% of users find it useful 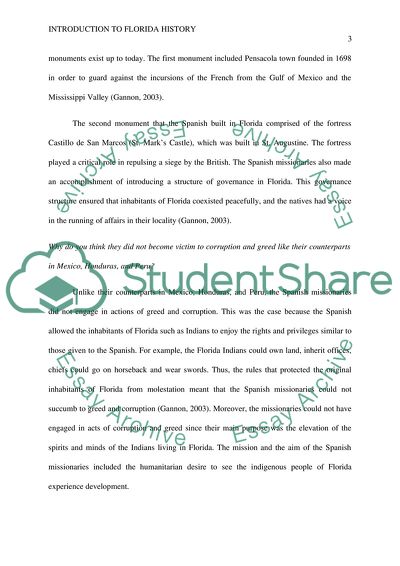 Introduction to Florida History Introduction to Florida History What did the Spanish missionaries accomplish in Florida? Florida was the first frontier of Europe in the North American continent, with its permanent settlement by Europeans dating back to more than four centuries. The Spanish city of St. Augustine had been established in Florida by the sixteenth century. An expedition directed by an experienced Spanish admiral, Pedro Menendez de Aviles, became a success in the founding of St. Augustine by 1565. Through their activities, Spanish missionaries made a lot of accomplishments in Florida. One of the accomplishments made by the Spanish missionaries included the renewal of the city of St. Augustine. The missionaries from Spain introduced in the town churches, a six-bed hospital, fort, a fish market, as well as shops. The Spanish missionaries also built houses in Florida, and this contributed to the expansion of the town. The changes they brought made Florida seem like the then Capital City of the United States (Gannon, 2003).
Other accomplishments made by Spanish missionaries in Florida included the introduction of Christianity and the European culture. The missionaries from Spain spread the gospel of Christianity and introduced their beliefs and customs to the native inhabitants of Florida. The missionaries also introduced formal education in Florida, which benefitted people of the Indian race. The missionaries from Spain also benefitted the Indians through their teaching of cattle rearing, European farming, weaving, carpentry, as well as reading and writing. Another accomplishment made by the Spanish missionaries in Florida included the establishment of two military and political monuments by the end of the 17th Century; these monuments exist up to today. The first monument included Pensacola town founded in 1698 in order to guard against the incursions of the French from the Gulf of Mexico and the Mississippi Valley (Gannon, 2003).
The second monument that the Spanish built in Florida comprised of the fortress Castillo de San Marcos (St. Mark’s Castle), which was built in St. Augustine. The fortress played a critical role in repulsing a siege by the British. The Spanish missionaries also made an accomplishment of introducing a structure of governance in Florida. This governance structure ensured that inhabitants of Florida coexisted peacefully, and the natives had a voice in the running of affairs in their locality (Gannon, 2003).
Why do you think they did not become victim to corruption and greed like their counterparts in Mexico, Honduras, and Peru?
Unlike their counterparts in Mexico, Honduras, and Peru, the Spanish missionaries did not engage in actions of greed and corruption. This was the case because the Spanish allowed the inhabitants of Florida such as Indians to enjoy the rights and privileges similar to those given to the Spanish. For example, the Florida Indians could own land, inherit offices, chiefs could go on horseback and wear swords. Thus, the rules that protected the original inhabitants of Florida from molestation meant that the Spanish missionaries could not succumb to greed and corruption (Gannon, 2003). Moreover, the missionaries could not have engaged in acts of corruption and greed since their main purpose was the elevation of the spirits and minds of the Indians living in Florida. The mission and the aim of the Spanish missionaries included the humanitarian desire to see the indigenous people of Florida experience development.
References
Gannon, M. (2003). Florida: A Short History. Florida: University Press of Florida. Read More
Share:
Tags
Cite this document
(“Week 2: First Settlers - Assignments- Introduction to Florida History Essay”, n.d.)
Week 2: First Settlers - Assignments- Introduction to Florida History Essay. Retrieved from https://studentshare.org/history/1604705-week-2-first-settlers-assignments-introduction-to-florida-history

...? Introduction to Florida History NOV 24, Civil rights movements climaxed in 1960s and dominated the social and political arena in Florida. Racial disorder had gained momentum, in attempts to end racial segregation and achieve black rights. As St. Augustine was celebrating the 400th anniversary in the spring of 1964, Dr. Martin Luther King, under Southern Christian Leadership Conference (SCLC) commenced an immense campaign to lend support to local civil rights movements. The objective of Dr. King was twofold: that in addition to ending local desegregation, the media attention given to the city would gather support nationally for the 1964 Civil Rights Act which had then stalled in congress. What happened is that, in 1963, under... that was in...
3 Pages(750 words)Essay

...W1 Discussion Board: Paleo-Indians-Introduction to Florida History W1 Discussion Board: Paleo-Indians-Introduction to Florida History Paleoindians used to be hunters and gatherers, and they must have hunted animals that can now be said to be extinct. They lived in large tracts of land in Florida, where they gathered plants, hunted game, and caught small animals. Some of the animals they hunted included mammoths, elephants, and other species such as bison and Pleistocene horses. The climate at that time, which used to be more arid than the modern climate, created an environment for hunting and gathering. As hunters and gatherers, Paleo-Indians depended on the plants they gathered, and animals they hunted for food (Milanich, 1998... ). What is...
1 Pages(250 words)Essay

...Week 4 - Application Assignment: hood of Florida October 26 The South’s defeat in the civil war impacted thelives of African American’s in Florida and the South in a number of ways. African Americans who were now able to leave slave owners, masters and mistresses, found there were no jobs to be had. With no money or homes there were many who could not survive and died of exposure, malnutrition, and lack of simple medical care (Gannon, p 46). The Freedmen’s bureau was established in March 1865 and their mission was to supply food, black educational institutions, medical aid, housing and legal assistance (History.com). Legal assistance was provided to advise the adult...
2 Pages(500 words)Essay

...W 10: We as Citizens December 8, Actions taken by the US government saved thousands of life with very few casualties during the Mariel boat lift. The United States response was correct politically however some of the refugees from Cuba spent excessive tie waiting in immigration centers and others were sent to correctional facilities with no possibility under United States law of release. The assistance given to other Federal agencies was correct in that this enabled these agencies to deal with and investigate those with criminal records. Because of these events Cuban’s have made a lasting and distinct impression on parts of Florida with their culture and heritage, bringing with them important traditions and expanding and...
1 Pages(250 words)Essay

...moves away and concentrates on the core social mission. All of the above mentioned methods work on the basis of social value. This is where one individual gets the drive and passion to work towards the betterment of humanity. Social value is the passion that inspires an individual to work for a social cause. Such elements inspire the person to place personal profits and benefits secondary. This is what is most integral when it comes to running a social enterprise. Once the social value is in the heart, the least important thing for a person becomes personal gains. This is the true essence of running a social enterprise when the interests of the community are given top priority. Written assignment...
6 Pages(1500 words)Coursework

...of a product through its Life-Cycle. The Life Cycle of a product hence starts from its phases of production, through to use with the eventuality of management of waste. The stages of the Life Cycle of a product/development are covered in the presentation below: History of the LCA Expression of the concerns of diminishing raw materials and sources of energy in 1960s led to the creation of LCA. The intent was to stipulate accounts for energy use in a cumulative manner and to give projections for the extensive future supply and use of resources. According to Schaltegger et al. (1996, 15), the first LCA publications presented by Harold Smith,...
24 Pages(6000 words)Assignment

...Insert Florida’s History Florida is one of the US’s most important Southern s, having been incorporated in the Union as the 27th member state in 1845. Florida is known as the Sunshine State and is popular for its mild climate and beautiful natural scenery. Spanish adventurer Juan Ponce de Leon, who is credited for giving the state the name made history as the first European to visit the state in early 16th century. The explorer derived the name Florida from Spain’s Easter festivities called “Pascua Florida.” Later on in the period between 1800 and 1850, US soldiers fought with Florida’s...
5 Pages(1250 words)Research Paper
sponsored ads
Save Your Time for More Important Things
Let us write or edit the essay on your topic "Week 2: First Settlers - Assignments- Introduction to Florida History" with a personal 20% discount.
GRAB THE BEST PAPER

Let us find you another Essay on topic Week 2: First Settlers - Assignments- Introduction to Florida History for FREE!