Comments (0)
Add to wishlistDelete from wishlist
Cite this document
Summary
As the so-called BRIC nations (Brazil, Russia, India, and China) continue with the struggle of easing their policies to rebalance their economic growth prospects in the face of a sluggish global economy, it must not be lost that their efforts are directed towards a storm…
Download full paperFile format: .doc, available for editing
HIDE THIS PAPERGRAB THE BEST PAPER99% of users find it useful 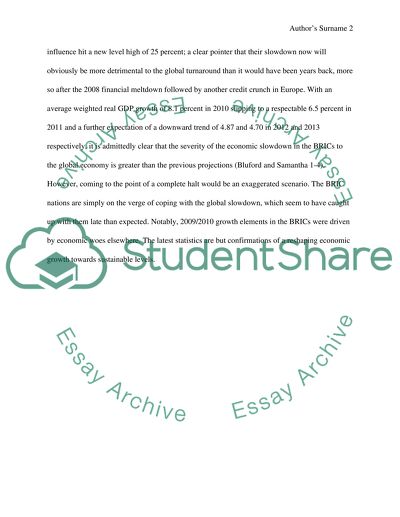 Due Q. Are we in danger of ignoring a slowdown in the BRIC nations when one or all of the BRIC countries come to a halt?
As the so-called BRIC nations (Brazil, Russia, India, and China) continue with the struggle of easing their policies to rebalance their economic growth prospects in the face of a sluggish global economy, it must not be lost that their efforts are directed towards a storm generated elsewhere. The most obvious reason for the gloomy growth momentum in these countries is the ever worsening economic effects of Euro debt crisis, which seems to be exporting lack of market confidence at their doorsteps owing to the general lack of economic leadership from the aging industrial countries. The slowdown is further aggravated by their internal challenges associated with structural problems as well as the massive uncertainty surrounding the fiscal policy cliff in the United States to boost the global economy after an almost fatal trap in the 2008 crisis (Bluford and Samantha 1).
The BRIC countries combined have been a dynamic growth powerhouse with a sizeable contributory effect to the world economic expansion over the past decade. The combined share of the BRIC’s input to the global GDP was at 8 percent in the year 2000. By 2010, their influence hit a new level high of 25 percent; a clear pointer that their slowdown now will obviously be more detrimental to the global turnaround than it would have been years back, more so after the 2008 financial meltdown followed by another credit crunch in Europe. With an average weighted real GDP growth of 8.1 percent in 2010 slipping to a respectable 6.5 percent in 2011 and a further expectation of a downward trend of 4.87 and 4.70 in 2012 and 2013 respectively, it is admittedly clear that the severity of the economic slowdown in the BRICs to the global economy is greater than the previous projections (Bluford and Samantha 1-4). However, coming to the point of a complete halt would be an exaggerated scenario. The BRIC nations are simply on the verge of coping with the global slowdown, which seem to have caught up with them late than expected. Notably, 2009/2010 growth elements in the BRICs were driven by economic woes elsewhere. The latest statistics are but confirmations of a reshaping economic growth towards sustainable levels.
Work cited:
Bluford, Putnam, and Samantha Azzarello. BRIC Country Update: Slowing growth in the face
of internal and external challenges. CMEGroup, 25 July 2012. Web. 30 Sept. 2012. Read More
Share:
Tags
Cite this document
(“Week5 Essay Example | Topics and Well Written Essays - 250 words”, n.d.)
Week5 Essay Example | Topics and Well Written Essays - 250 words. Retrieved from https://studentshare.org/history/1604104-week5

CHECK THESE SAMPLES OF Week5

Significant event in my life

...SALEH ALOTHMAN Week 5: Facilitating a team during its growing pains Word Count: 580 Team empowerment The problem that I have identified to discuss here is related to team facilitating. Organized teams lead to greater productivity and this can be achieved through team empowerment. My opinion is that teams need facilitators to be successful in the current business environment. This is because facilitators apart from being organizers and communicators also specialize in group dynamics. They encourage the team throughout the project in the stages of planning and are also involved in organizing, disciplining, monitoring the team. Within my organization, team empowerment is not adopted. The employees follow the instructions relayed... ALOTHMAN...
2 Pages(500 words)Essay

...Discussion: Week 5 Discussion: Week 5 Speech Experts - From the e-Activity, describe two tips for effective speaking (not already described by another student) that you found on the Toastmasters International Website. Explain whether you find these tips to be useful or not for you. => One tip for effective speaking that I learned from the Toastmasters International (2011) website is “Stimulate action.” It says that in presenting proposals, the presenter is doing more than just informing. The presenter here is trying to persuade. I find this tip useful because I was able to really apply it in the presentation I did. I was able to insert some argument points that not only inform my audience, but also influence them to believe... Week 5...
1 Pages(250 words)Term Paper

... Some historians have called the Crusades “successful failures.” Using what you learned from the textbook readings this week, explain how these historians could justify such an opinion. Do you agree with them? Why or why not? How did the idea of crusade change from the time of the original expedition to the Holy Land? Were these latest Crusades more or less successful than the originals? Why? It is found that the immediate cause of the First Crusade was the capture of Jerusalem in 1055 by the Seljuk Turks and Christians, particularly the Christian kings and knights of Europe benefitted the most during the military expedition in pursuit of rescuing the Holy Land from the Muslim Turks. Despite this picture of heroism, however... Some...
1 Pages(250 words)Case Study

...Human Development: Respond to the following: Specifically, what can we learn about human cognitive development through the study of these animals? An exploratory study of animals like famous chimpanzees reveals that when it comes to cognitive development, human toddlers are really not very far away from young chimpanzees. This divide is very small because it is learned that if infant chimpanzees like Washoe are kept away from other animals and reared in an exclusively human environment, they would also acquire human abilities like competency in symbolic language. However, despite the linguistic achievements of Washoe, it is not yet established if apes can learn a human language as well as human themselves can. This is because... Development:...
1 Pages(250 words)Assignment

...Spotting Talent al Affiliation: Spotting Talent This case implies there is a high demand for qualified employees while there is lesssupply from the institutions. In addition, it implies that not all qualified employees can be fruitful to the organization. Therefore, organizations are going ahead to look for those who can be driving force in the organization in terms of innovation and bringing change. This is making many not to meet these requirements because they are only focusing on education qualified. Search for the “purple squirrel” is looking for an employee with the right education, experience, and qualification. This is a person who fits perfectly in the multifaceted requirements. Many of the job candidates might have... Talent al...
1 Pages(250 words)Case Study

...Contracts for the International Sale of Goods al Affiliation) Under the CISG, the basic rule for the person who bears the risk of loss is that the buyer bears the risk of loss or damage to the goods after the risk has passed to the buyer unless the contract states otherwise. When the seller hands over the goods to the buyer or first carrier it is the buyer who is responsible for the goods. Moreover, INCOTERMS are terms that are agreeable for the purchase and shipping of goods that used internationally and accepted by governments and the law. They show the responsibilities of the seller and the buyer as well as the payment terms. For example, “Free On Board” (FOB) used only in sea freight. According to the INCOTERMS groupings... for the...
1 Pages(250 words)Coursework

19 Pages(4750 words)Case Study
sponsored ads
Save Your Time for More Important Things
Let us write or edit the essay on your topic "Week5" with a personal 20% discount.
GRAB THE BEST PAPER

Let us find you another Essay on topic Week5 for FREE!