Comments (0)
Add to wishlistDelete from wishlist
Cite this document
Summary
The United Nations is a worldwide organization that was established with the primary objective of bringing unity to the countries around the globe that could work in association and harmony with each other, and that on the principles of impartiality, respect of entire human…
Download full paperFile format: .doc, available for editing
HIDE THIS PAPERGRAB THE BEST PAPER92.7% of users find it useful 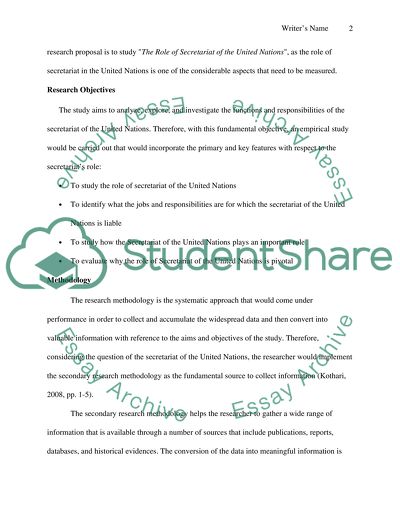 “The Role of the Secretariat of the United Nations Research Paper”, n.d. https://studentshare.org/history/1602197-the-role-of-the-secretariat-of-the-united-nations.
Comments (0)
Click to create a comment or rate a document

Role of secretariat of the United Nations

...? Role of Secretariat of the United Nations Executive Summary The Secretariat of United Nations comprises of different divisions and offices, each one of these divisions is responsible for a particular task. The Executive Office of the Secretary-General includes the Secretary-General as well as his senior consultants. The Secretariat has more or less 25000 staff members on contractual bases for a year or more, from which around 18000 are paid from extra budgetary funds. Workers hired on a contract for less than a year sum up to around 30000 from 180 states. The Secretariat ascertains...
15 Pages(3750 words)Research Paper

...?Effectiveness of United Nations Established on 26 June 1945 in the aftermath of World War II, United Nations is now an organization with sixty five years of existence on the globe. Beside social, economic, and humanitarian issues, the chief motivation and rationale behind its foundation was to achieve the global peace and stability. Therefore, human progress and prosperity along with peace and security can be safely declared as the measuring yard for the effectiveness of the United Nation. This is what the United Nations charter talks about, “to save succeeding generations from the scourge of war, which...
4 Pages(1000 words)Essay

...law in 1970. the law was made by him based on the events took placed internationally since 1917. The main highlights of the law were the nature of legal relationships among socialist countries, principal factors at work in international politics, legal nature of international organizations, international law, foreign policy, diplomacy etc (Tunkin, G.I. n.d) After the failure of the league of nations, a new organization was formed by the world powers after the second world war ,which came to be known as the United Nations established in the year oct24,1945 (Charter of the United Nations, n.d). The general assembly of the United...
4 Pages(1000 words)Essay

...The United Nations The year 1991. The strategic war between the two superpowers, the United s and the Soviet Union had ceased. This is becauseof the collapse of Soviet Communism in the USSR itself. Now that the Cold War is all but over, the role of the United Nations as world arbiter had considerably diminished, for the conflict between two great nations had ceased. However, UN peacekeeping had not ceased, because turmoil and conflicts still mar the international community, therefore, the need for them, for ceasefires are not permanent. As a general policy upheld until now, they were only fielded in peacekeeping zones...
2 Pages(500 words)Essay

...of ensuring that the calamity of the Second World War never occurs again through peaceful diplomacy and collective negotiation through intercultural communication. This essay will describe the emergence of the United Nation as a viable multilateral organization, explain the reasons for its emergence and discuss the goals of this supranational body. Why was the United Nations established and what role does intercultural communication play within the UN? These questions, and many more, with respect to the development of the United Nations will be analyzed and discussed in depth. We will then summarize our analysis and...
5 Pages(1250 words)Essay

...UN The United Nations came out of the failed League of Nations in the 20th century, and since then, although it has changed in scope, duties, and membership, it has remained a vital and fundamentally effective international organization. The United Nations was originally set up as a charter for nations in war to keep their alliances. Problems arose from this situation because previous organizations like the League of Nations had not succeeded, so it was important to create a body that was not similarly flawed. Earlier organizations had also failed because they showed themselves to be the victors dividing the spoils...
2 Pages(500 words)Essay

...by the judges (United Nations 2010). Trusteeship Council The Trusteeship council had a total 11 trust territories which were to be judged by seven member states. Its primary aim was to prepare the territories for independence and self governance in the future. The 11 territories have successfully attained independence and the procedure and rules are still there to follow for any future incident (United Nations 2010). Secretariat The secretariat is the everyday office of the United Nations. It follows a protocol to analyze the processes that other bodies of the UN have implemented. In other words it...
8 Pages(2000 words)Essay

...The United Nations The United Nations (UN) was formed immediately after the Second World War with the aim of preventing another such incidence. Therefore, its main aim was and still is to maintain worldwide peace by ensuring friendly coexistence between nations. On its formation it had 51 members but as the years advanced the members increased and it now has 193 members. Other UN functions include environmental protection, enforcing human rights, social and economic development among others. These functions are specialized to the various UN organs that include the Economic and Social Council (ECOSOC), the General Assembly, the Security Council, the...
2 Pages(500 words)Essay

...support by donating to the organization to keep the operation of the organization moving. The objectives of UN include provision of human aid to victims of natural disaster, famine, and armed conflict. UN also plays the roles of protecting the environment, promoting human rights, maintained of peace and order, and fostering economic and social developments to the member countries (Meisler 12). Structure The structure of the United Nations is based in five different organs which include Security Council, General Assembly, The Secretariat, Economic and Social Council and International Court of Justice. One of the organs (Trusteeship council) was suspended in 1994. A part...
2 Pages(500 words)Essay
sponsored ads
Save Your Time for More Important Things
Let us write or edit the research paper on your topic "The role of the secretariat of the United Nations" with a personal 20% discount.
GRAB THE BEST PAPER

Let us find you another Research Paper on topic The role of the secretariat of the United Nations for FREE!