What were the political, strategic, and economic implications of the U.S. winning the Spanish-American War - Essay Example

Comments (0)
Add to wishlistDelete from wishlist
Cite this document
Summary
The Spanish-American War, also dubbed as the “Splendid Little War”1was a brief battle between Spain and the United States basically caused by the latter’s intervention in Cuba’s battle for independence from Spain.
To note, Spain was the dominant world power of the 1600s…
Download full paperFile format: .doc, available for editing
HIDE THIS PAPERGRAB THE BEST PAPER93.9% of users find it useful 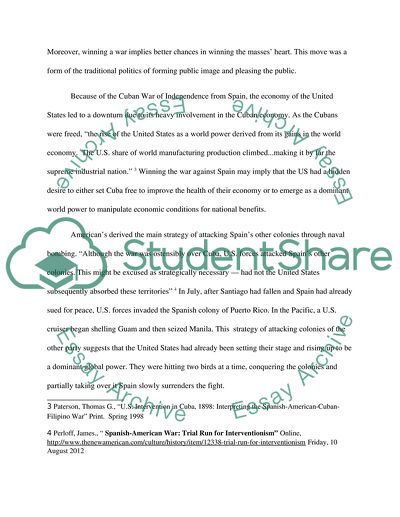 Extract of sample "What were the political, strategic, and economic implications of the U.S. winning the Spanish-American War"

On The Splendid Little War The Spanish-American War, also dubbed as the “Splendid Little War”1was a brief battle between Spain and the United s basically caused by the latter’s intervention in Cuba’s battle for independence from Spain.
To note, Spain was the dominant world power of the 1600s controlling a great number of colonies. Over the succeeding centuries, they had unfortunately lost this authority due to independence revolutions spurred by its dependents in Asia and on the Caribbean islands. Since Cuba acquired independence from Spain with the aid of the United States, the latter became the emerging dominant world power of the era through acquiring Spain’s former colonies.
One political implication is that “when the balance of power in an international system is shifting, war becomes more likely when leaders’ domestic political outcomes depend on a favorable national outcome in the international system”.2 Note that the Americans, due to yellow journalism, had felt perturbed due to the atrocities that reportedly happened from the Spanish Occupation in Cuba. In return, the state leaders were seized to follow the demands of their voting public to avoid defeat in elections even though they wished for more peaceful settlement. Moreover, winning a war implies better chances in winning the masses’ heart. This move was a form of the traditional politics of forming public image and pleasing the public.
Because of the Cuban War of Independence from Spain, the economy of the United States led to a downturn due to its heavy involvement in the Cuban economy. As the Cubans were freed, “the rise of the United States as a world power derived from its gains in the world economy. The U.S. share of world manufacturing production climbed...making it by far the supreme industrial nation.” 3 Winning the war against Spain may imply that the US had a hidden desire to either set Cuba free to improve the health of their economy or to emerge as a dominant world power to manipulate economic conditions for national benefits.
American’s derived the main strategy of attacking Spain’s other colonies through naval bombing. “Although the war was ostensibly over Cuba, U.S. forces attacked Spain’s other colonies. This might be excused as strategically necessary — had not the United States subsequently absorbed these ­territories” 4 In July, after Santiago had fallen and Spain had already sued for peace, U.S. forces invaded the Spanish colony of Puerto Rico. In the Pacific, a U.S. cruiser began shelling Guam and then seized Manila. This strategy of attacking colonies of the other party suggests that the United States had already been setting their stage and rising up to be a dominant global power. They were hitting two birds at a time, conquering the colonies and partially taking over it Spain slowly surrenders the fight.
Because the Americans were able to win the war over the Spaniards, they have claimed the throne for world power. The economic, strategic and political implications of this triumph mainly deal with benefiting from the power that they gained from this short-term battle.
Bibliography
Anonymous. CIOCCA History. https://cioccahistory.pbworks.com.(accessed August 22,2012 )
Paterson, Thomas G. 1998. U.S. Intervention in Cuba, 1898: Interpreting the Spanish-American-Cuban-Filipino War.
Perloff, James. August 2012 Spanish-American War: Trial Run for Interventionism. http://www.thenewamerican.com/culture/history/item/12338-trial-run-for-interventionism. (Accessed August 22, 2012)
Wang, Bella. E-International Relations. May 2012. Power, Domestic Politics, and the Spanish-American War http://www.e-ir.info/2012/05/21/power-domestic-politics-and-the-spanish-american-war/ (accessed August 22, 2012) Read More
Share:
Tags
Cite this document
(“What were the political, strategic, and economic implications of the Essay”, n.d.)
What were the political, strategic, and economic implications of the Essay. Retrieved from https://studentshare.org/history/1601884-what-were-the-political-strategic-and-economic-implications-of-the-us-winning-the-spanish-american-war

“What Were the Political, Strategic, and Economic Implications of the Essay”, n.d. https://studentshare.org/history/1601884-what-were-the-political-strategic-and-economic-implications-of-the-us-winning-the-spanish-american-war.
Comments (0)
Click to create a comment or rate a document

CHECK THESE SAMPLES OF What were the political, strategic, and economic implications of the U.S. winning the Spanish-American War

... Spanish American War Spanish American War since its culmination to has brewed numerous arguments among diverse scholars, historians and judicial systems trying to unveil the truth behind its eruption. Global judicial systems that have the mandate of correcting the history resulted in conflicting interpretations regarding the war eruption. The involved parties, who felt that the reasons offered by the courts failed to favor their side, thus termed the reasons as politically fueled and one-sided. These interpretations mainly were revisionist, and the court prompted the involved parties, together with their allies, to take one side contrary to their opposing side since they felt that there was a misinterpretation of their reasons... of...
3 Pages(750 words)Essay

...months’ time, although he did not expect the Spanish to agree. Eventually, McKinley was almost prepared for a potential war. During this time, Praxedes Sagasta became the prime minister of Spain. He strongly criticized the military aggression in Cuba and instead favored economic control over the island. This gesture was supported by McKinley as he believed it to be the first step towards Cuban independence. On one hand, he was suspicious of Spain’s intentions, and on the other hand, he was under pressure to end the Cuban war so that the Democrats could not make it an issue to win votes. In 1898, Sagasta’s reform policies were attacked by...
7 Pages(1750 words)Research Paper

...Why the United s Went to War with Spain in 1898 and What Subsequent Foreign Policy Changes Resulted Written by: Laura A. Neff Fortunately or unfortunately there are many reasons to go to war. The Spanish-American War in 1898 was an unwanted war for the administration here in the United States, but the press and the public were the rallying cry that set the possibilities in motion. This after the start of what is termed as Yellow Journalism brought on by Joseph Pulitzer and William Hearst, both very powerful newspaper publishing magnates. The precedents for this war included the Spanish treatment of the men, and especially the women, of Cuba and the surrounding islands of the Philippines. President McKinley finally had no choices... . org...
6 Pages(1500 words)Essay

...in the war depended on the question of it having any advantage for the Mormon kingdom. This remained the basis of their role in the American-Spanish war. While Utah, the territory of Mormons had been a state in the Union, for merely two years, at the time of this war; Mormons were unpopular as their political and economic domination was worrying federal officials. Accordingly, several laws, including abolition of polygamy were enacted by federal government, which resulted in many Mormons going to jail, as they practiced polygamy.(2) Although many Utah senators introduced resolutions for...
5 Pages(1250 words)Research Paper

...-coalition pact is signed with all issues and challenges ironed out. Consultation and harmonization of the various policies and ideologies will ultimately ensure that a win is inevitable. Strategies discussed herein ensure that people are fully involved in the election of the coalition leaders, this gives the people power over the coalition. Work Citied Barbara and Robert, N. Political Parties: Their Organization and Activity in the Modern State. Paris: University of Paris, 1951. Print. Berger, S. Organizing interests in Western Europe. Cambridge: Cambridge University Press, 1981. Print. Epstein, L, D. Political Parties in Western Democracies. New York: Frederick A....
7 Pages(1750 words)Essay

...of confidence among the leaders creating a major feature of the American politics. Earlier on, an energy crises and other economic troubles emerged raising concerns on Americans prosperity and power. As a result, the crises saw the beginning of a permanent and long decline in the countries manufacturing employment industry, as well as the European markets. However, in terms of economic and military terms, the country remained the key force in the globe (Hamilton and Neil 2006, 21). The "conservatism and the Reagan Revolution" a response to the “crisis of confidence” As a political era, the conservatism realignment began in response to...
2 Pages(500 words)Admission/Application Essay
sponsored ads
Save Your Time for More Important Things
Let us write or edit the essay on your topic "What were the political, strategic, and economic implications of the U.S. winning the Spanish-American War" with a personal 20% discount.
GRAB THE BEST PAPER

Let us find you another Essay on topic What were the political, strategic, and economic implications of the U.S. winning the Spanish-American War for FREE!