Comments (0)
Add to wishlistDelete from wishlist
Cite this document
Summary
During this 17th Century, the monarch in England had shortage of revenues and therefore demanded the nobility and other politicians in England to give them the money but they refused and saw…
Download full paperFile format: .doc, available for editing
HIDE THIS PAPERGRAB THE BEST PAPER92.5% of users find it useful 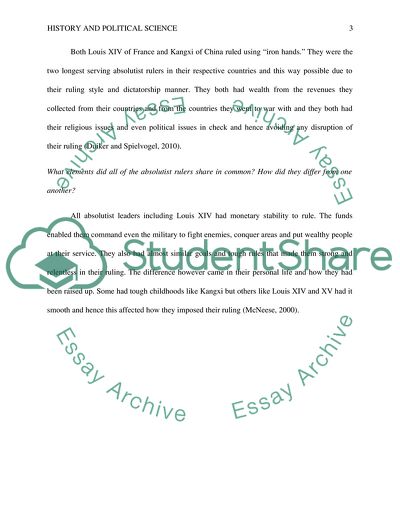 Absolutism and Limited Monarchy Affiliation: Identify and discuss factors that led to a different solution to the monarchy question in England in the 17th century, as opposed to the continent.
One of the factors was the concern for revenue that would be used to run the monarchy. During this 17th Century, the monarch in England had shortage of revenues and therefore demanded the nobility and other politicians in England to give them the money but they refused and saw the monarchy as weak. Religion is another factor that made the monarch of England questionable. This is because there were many Protestants in England and whose puritanism influence and movement opposed strongly the monarch. Institutional influence was another factor during this period in England where parliament of England was known to have strong political interests in the country and this threatened the monarch (Duiker and Spielvogel, 2006).
Why do you think that limited monarchy was not an option in France and Central Europe?
France and central Europe had strong Catholic roots and hence the Protestants who were known to interfere with monarchy system had no voice. These countries also had strong traditional sources of revenue that they used to run their monarch and this made even the nobility and other political interests in their countries to be at their mercy. This too place in around 1850s and it tossed aside the option of having a limited monarch (Perry, Chase, Jacob, Jacob and Von Laue, 2008).
Compare the classical absolutism of Louis XIV in France with one other ruler, Kangxi of China who ruled from 1661 to 1722, Peter the Great of Russia who ruled from 1689 - 1725, or Aurangzeb, Mughal emperor who ruled India from 1658-1707.
Both Louis XIV of France and Kangxi of China ruled using “iron hands.” They were the two longest serving absolutist rulers in their respective countries and this way possible due to their ruling style and dictatorship manner. They both had wealth from the revenues they collected from their countries and from the countries they went to war with and they both had their religious issues and even political issues in check and hence avoiding any disruption of their ruling (Duiker and Spielvogel, 2010).
What elements did all of the absolutist rulers share in common? How did they differ from one another?
All absolutist leaders including Louis XIV had monetary stability to rule. The funds enabled them command even the military to fight enemies, conquer areas and put wealthy people at their service. They also had almost similar goals and tough rules that made them strong and relentless in their ruling. The difference however came in their personal life and how they had been raised up. Some had tough childhoods like Kangxi but others like Louis XIV and XV had it smooth and hence this affected how they imposed their ruling (McNeese, 2000).
References
Duiker, W. J. and Spielvogel, J. J. (2006). World History: From 1500. New York: Cengage Learning.
Duiker, W. J. and Spielvogel, J. J. (2010). The Essential World History. New York: Cengage Learning.
McNeese, T. (2000). History of Civilization - The Age of Absolutism. Illinois: Lorenz Educational Press.
Perry, M., Chase, M., Jacob, M., Jacob, J. and Von Laue, T. (2008). Western Civilization: Ideas, Politics, and Society: From the 1600s, Volume 2. New York: Cengage Learning. Read More
Share:
Tags
Cite this document
(“Absolutism and Limited Monarchy Essay Example | Topics and Well Written Essays - 250 words”, n.d.)
Retrieved from https://studentshare.org/history/1601736-absolutism-and-limited-monarchy

CHECK THESE SAMPLES OF Absolutism and Limited Monarchy

...? United Monarchy United Monarchy United Monarchy is the period 1020-922 (BCE) wherein a United Israelite kingdom existed. After the death of Moses, Israelites entered Canaan and occupied the territory. They then shifted from being nomadic tribes to settled agriculture people. At this point, the different tribes (twelve) were led by the “judges”. The exact function of the judges is not defined clearly in the text. During this time, there was no single place of worship and Israelites believed in worshipping Yahweh alone. In contradiction, their neighbours were polytheists and worshipped idols of God, and this was a constant temptation for Israelites. There was God’s law which guided...
5 Pages(1250 words)Essay

From absolutism to monarchy

...to provide stability and order in administration. The preached salvation to be the ultimate goal, but people lost faith in the Church when it failed to provide salvation. Eventually in 1688, William and Mary take on the responsibility of forming a Constitutional Monarchy in England after they succeeded James II. This was a type of government that gave the king only limited powers. References Anderson Perry. (1974) Lineages of the Absolutist State: London: Verso. Bouwsma, William J.,(1988) in Kimmel, Michael S. Absolutism and Its Discontents: State and Society in Seventeenth-Century France and England. New Brunswick, NJ: Transaction Books, 1988, 15 Katherine...
2 Pages(500 words)Essay

...THE MONARCHY In 15th century most of the world was ruled kings and monarchs and Europe was no exception. England under the Kingdom of Great Britain emerged as the most powerful and flexed its muscles throughout the world. Most of the European Kingdoms used to involve in battles with their neighboring kingdoms to showcase their power and expand it beyond their boundaries. In their quest for power they annexed many small kingdoms and assured them as equals among the new fraternity, thus winning their loyalty the monarch able to control them. If they resisted harsh punishments were practiced without any mercy. England has always used the policy of divide and rule and certainly almost all the times it worked. They became...
1 Pages(250 words)Term Paper

...as the political authority of some regions that held a slender threat of autonomy, presented continuing obstacles to Louis’ dream of absolute authority. A strong centralized monarchy was necessary to realizing his goals of wielding power without the intrusion of these special interests. The finest method toward achieving this goal was not coercive techniques in the form of stamping out those obstacles, but the secret weapon of those who lust for absolute power even today: propaganda. The brilliance of Louis’ claim for unchecked power lay within his realization that he could convince the citizens that holding power in a strong centralized monarchy was the most...
2 Pages(500 words)Essay

Absolutism in the Hapsburg Empire

..., the nobility obstructed the movement toward absolutism in a way that that Louis never allowed his nobles to do in France. In essence, the centralization of power became limited mainly to Austria as the nobles in Hungary and Bohemia moved to retain their local sovereignty. The primary difference between the absolutism that was practiced in the Hapsburg empire as compared to its precursors and model in the French court of Louis XIV was that Leopold version of an absolute monarchy was severely tempered by the autonomy possessed by the nobility. The base of the nobility had strong support at the local levels through the regions outside of Austria. ...
2 Pages(500 words)Essay

...Absolutism Table of Contents Role of the Reformation in the Development of Absolute Monarchies in France and Spain 3 2. Similarities Between the Courts of Philip II and Louis XIV 3 3. How Frederick William I Helped Frederick the Great Become an Effective King of Prussia 4 4. Why Philip II Was Intolerant of Muslims and Jews in His Native Spain 5 5. The Edict of Nantes: Impact on French Protestant Huguenots, Why Henry IV Signed It 5 6. Creator of ‘Army of Giants’, Fit With Prussia Rule Master Plan 6 7. Use of ‘Poor Laws’ and ‘Statute of Apprentices’ by Elizabeth I to shift responsibility to Territory’s Local Areas and Away from the Monarchy 6 8. Key Differences in the Ways Elizabeth I and Louis XIV Promoted ‘Cultural Awakening... of...
6 Pages(1500 words)Essay

...﻿ Financial Analysis of SEEK Limited, Telstra Limited and Ansell Limited 1. EXECUTIVE SUMMARY This essay discusses about three stock companies (Limited, Telstra, and Ansel). This will be done through, providing a brief background of each company, calculation of its expected return as well as standard deviation using the historical for each company’s selected stocks. The data use will be ending in June 2015. Later, 30different portfolios will be constructed which will entail various weights of the above three chosen three stock companies. This essay will also attempt to determine the expected rate of return as well as standard deviation for every asset. Every result...
10 Pages(2500 words)Essay
sponsored ads
Save Your Time for More Important Things
Let us write or edit the essay on your topic "Absolutism and Limited Monarchy" with a personal 20% discount.
GRAB THE BEST PAPER

Let us find you another Essay on topic Absolutism and Limited Monarchy for FREE!