Comments (0)
Add to wishlistDelete from wishlist
Cite this document
Summary
This study discusses the protestant reformation as the greatest religious movement since the advent of the early church. The study analyses social and political conditions in Europe leading up to the Reformation. The study considers some of the main figures in the Reformation…
Download full paperFile format: .doc, available for editing
HIDE THIS PAPERGRAB THE BEST PAPER95.3% of users find it useful 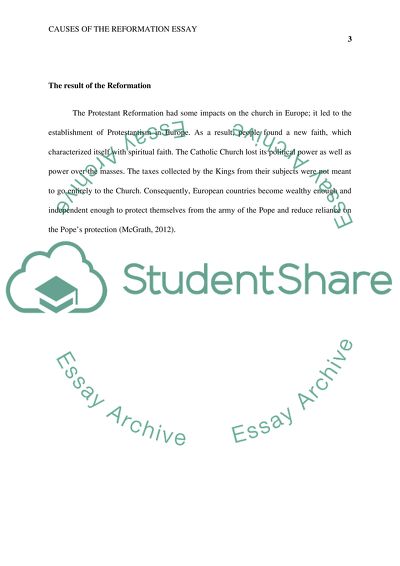 Extract of sample "Causes of the Reformation"

Causes of the Reformation Essay Causes of the Reformation Essay The protestant reformation can be regarded as the greatest religious movement since the advent of the early church. The reformation acted as a basis for the revival of the Biblical theology as well as the theology of the New Testament. Several factors caused the protestant reformation. The reformation can be attributed to the numerous efforts of groups opposed to the Roman Catholic Church. Some of the causes of the reformation included papacy, purgatory, auricular confession, and the worship of saints and pilgrimages. Factors such as the corruption of the papacy, decline of the scholastic and monasticism theology, as well as the revival of the Roman and Greek classics also caused the reformation. The invention of the printing press was also a contributing factor, as it led to the republishing of the Greek New Testament (Hillerbrand, 2009).
Social and political conditions in Europe leading up to the Reformation
Before the Protestant Reformation, most people subscribed to the Roman Catholic religion, which held the belief that Pope was directly appointed by God. Prior to the Reformation, cities and key towns emerged as a result of rise in population. The age of Renaissance was also rife, and it encouraged people to think and be innovative. Politically, the Roman Catholic Church has absolute powers in Europe, and it had an immense impact on governance and the ruling class (Spitz, 2003).
Some of the main figures in the Reformation
The most common figure during the Protestant Reformation was Martin Luther King who wrote 95 theses, which reacted to the sale of indulgences. Other figures included John Calvin, Ulrich Zwingli, and John Knox (Gray, 2003).
The result of the Reformation
The Protestant Reformation had some impacts on the church in Europe; it led to the establishment of Protestantism in Europe. As a result, people found a new faith, which characterized itself with spiritual faith. The Catholic Church lost its political power as well as power over the masses. The taxes collected by the Kings from their subjects were not meant to go entirely to the Church. Consequently, European countries become wealthy enough and independent enough to protect themselves from the army of the Pope and reduce reliance on the Pope’s protection (McGrath, 2012).
References
Gray, M. (2003). The Protestant Reformation: Belief, Practice, and Tradition. Sussex: Sussex Academic Pres.
Hillerbrand, H. J. (2009). The Protestant Reformation: Revised Edition. New York: HarperCollins.
McGrath, A. E. (2012). Reformation Thought: An Introduction. New York: John Wiley & Sons.
Spitz, L. W. (2003). The Protestant Reformation, 1517-1559. London: Concordia Publishing House. Read More
Share:
Tags
Cite this document
(“Causes of the Reformation Essay Example | Topics and Well Written Essays - 250 words”, n.d.)
Retrieved from https://studentshare.org/history/1601606-causes-of-the-reformation-essay

CHECK THESE SAMPLES OF Causes of the Reformation

...? The Reformation Introduction The Reformation is also known as the Protestant Reformation that took place in the 16th centuryin Europe. It was initiated by Martin Luther and John Calvin along with some other Protestants on the schism within Western Christianity. Mostly the efforts of the reformers who objected to the doctrines and rituals of the Roman Catholic Church led to the creation of the Protestant churches. In 1520, the Reformation spread in Italy and however collapsed in the beginning of the 17th century. It had no lasting influence unlike other European countries except the fact that it strengthened the Roman Catholic Church1. However, sometimes...
3 Pages(750 words)Essay

...Reformation/pg The Reformation was touched off by an event in 1517 propagated by Martin Luther, an Augustinian monk. He tacked a set of 95 propositions to the door of a Wittenberg church in order to spark academic debate. This event can be pointed to as the incendiary match that lit the ensuing firestorm of reformation that permanently altered the religious, political and temporal landscape in Europe and beyond. It may have been the match, but the tinder of reformation had been smoldering for centuries. Europe, for hundreds of years, had been dominated by the Roman Catholic religion in all aspects of society. The citizenry, including peasants, noble born and even...
2 Pages(500 words)Essay

...1. Discuss the causes of the Protestant Reformation. Martin Luther started the Protestant Reformation when he nailed his manifesto on the chapel door on October 31, 1517, in Wittenberg. The manifesto consisted of ninety-five theses. That day was the Feast of All Saints in which pious folk came to venerate the precious relics of His Highness the Elector, Frederick the Wise. Valuable indulgences were gained when one venerates the relics. Luther's document were about the abuse of the granting of indulgences to the people. He stated that those preaching in favor of indulgences make a serious error when they say that these indulgences alone can grant man salvation. Luther stated that the...
6 Pages(1500 words)Essay

The most important causes of the Protestant Reformation

...﻿The most important causes of the Protestant Reformation At the beginning of the XVI century the biggest crisis of the Roman Catholic Church came. All society of that time required converting the church. So the "Protestant Reformation" was a movement for religious reforms in XVI century in Europe. It attempted to create new, alternative church, which would reflect more accurately the early Christian or biblical ideals. By this they meant renunciation of the church on the secular authority, the observance of ecclesiastical laws, restricting of the clergy discipline, improving morality, renunciation of scholasticism frills, destroying indulgences, spreading of the religious...
2 Pages(500 words)Essay

...Protestant Reformation al Affiliation Protestant reformation refers to a religious change that swept across Europeduring the 16th century. The main contributors of the reforms that took place were Martin Luther, John Calvin and Hulrich Zwingli. They were against the ways of the Roman Catholic Church. Martin Luther one of the main reformists came up with the 95 Theses, which was a list of the Roman Catholic Church practices that he opposed. Martin Luther stated that salvation could be gained by faith alone and not by faith and good deeds as the Catholic Church stated. He was also against the seven catholic sacraments which included confession, prayers to saints, the use of religious relics, and celibacy among others. He was against... ...
4 Pages(1000 words)Essay

...﻿Protestant Reformation During the 16th century the great reformer Martin Luther spread his teachings of Lutheranism which is one of the branches of Protestantism. By the 18th century Lutheranism spread to many countries such as America, Germany and many other parts of the world. In fact, now it claims to be the biggest non- Roman Catholic body in the Western Christian Church. Luther was very perturbed by the corruption and immorality present in the Catholic Church and hence resorted to making some reforms to rectify the corrupt teaching of the church. The word “Lutheranism” was given by none other than Luther’s enemies during the Leipzig Disputation in 1519,. He strongly felt that this...
16 Pages(4000 words)Essay
sponsored ads
Save Your Time for More Important Things
Let us write or edit the case study on your topic "Causes of the Reformation" with a personal 20% discount.
GRAB THE BEST PAPER

Let us find you another Case Study on topic Causes of the Reformation for FREE!