Comments (0)
Add to wishlistDelete from wishlist
Cite this document
Summary
They still used stone-age technology to conduct their businesses and protect themselves from attacks from other empires. The Spanish on the other hand had modern technology which was mighty and not in any way comparable to…
Download full paperFile format: .doc, available for editing
HIDE THIS PAPERGRAB THE BEST PAPER92.6% of users find it useful 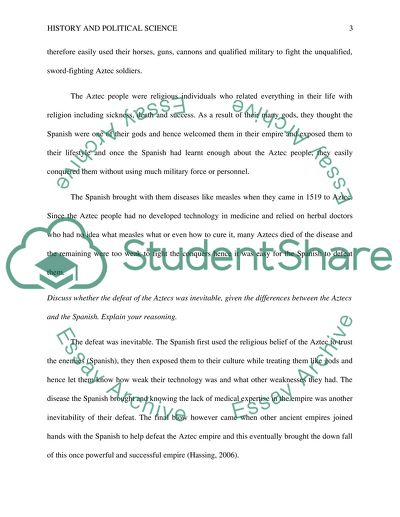 Extract of sample "Ancient Mexico and the Spanish"

Ancient Mexico and the Spanish Affiliation: Evaluate the differences in Aztec andSpanish technology and political control.
Aztec was a native and naïve empire compared to Spain. They still used stone-age technology to conduct their businesses and protect themselves from attacks from other empires. The Spanish on the other hand had modern technology which was mighty and not in any way comparable to that of the Aztec. The Aztec for example used canoes and human transportation while the Spanish had mighty ships, horses and even dogs for transport. The Aztec used swords to fight and the Spanish came with guns and cannons (Castillo, 2004).
Politically, the Aztec empire was ruled by leaders who had inherited their leadership from their parents and hence the rulers were not necessarily qualified to rule. On the other hand, the political control and power of the Spanish even before they came to conquer new world in the 1500s was invested in military personnel who were qualified in terms of leadership skills and prowess to fight. This is thus the reason it was not so hard for the Aztec rulers to welcome the Spanish due to their lack of leadership skills and wisdom.
Specifically, what led to the Aztec defeat by a few Spanish in a very short period of time?
According to history, there are three major reasons that led to the defeat of the Aztec by the Spanish in not only a short span of time but also by a very small number of Spanish people. These reasons include but are not limited to: technology, disease and religion (Pohl, 2005). As discussed earlier, the technology of the Aztec and that of the Spanish was incompatible. The technology used by the Aztec was naïve, ancient and could not stand a chance with the modern technology of the Spanish. This is especially so with fighting technological gear. The Spanish therefore easily used their horses, guns, cannons and qualified military to fight the unqualified, sword-fighting Aztec soldiers.
The Aztec people were religious individuals who related everything in their life with religion including sickness, death and success. As a result of their many gods, they thought the Spanish were one of their gods and hence welcomed them in their empire and exposed them to their lifestyle and once the Spanish had learnt enough about the Aztec people, they easily conquered them without using much military force or personnel.
The Spanish brought with them diseases like measles when they came in 1519 to Aztec. Since the Aztec people had no developed technology in medicine and relied on herbal doctors who had no idea what measles what or even how to cure it, many Aztecs died of the disease and the remaining were too weak to fight the conquers hence it was easy for the Spanish to defeat them.
Discuss whether the defeat of the Aztecs was inevitable, given the differences between the Aztecs and the Spanish. Explain your reasoning.
The defeat was inevitable. The Spanish first used the religious belief of the Aztec to trust the enemies (Spanish), they then exposed them to their culture while treating them like gods and hence let them know how weak their technology was and what other weaknesses they had. The disease the Spanish brought and knowing the lack of medical expertise in the empire was another inevitability of their defeat. The final blow however came when other ancient empires joined hands with the Spanish to help defeat the Aztec empire and this eventually brought the down fall of this once powerful and successful empire (Hassing, 2006).
References
Castillo, B. (2004). The Discovery and Conquest of Mexico 1517-1521. New Jersey: Routledge.
Hassing, R. (2006). Mexico and the Spanish Conquest. Oklahoma: University of Oklahoma Press.
Pohl, J. (2005). Aztecs and Conquistadores: The Spanish Invasion and the Collapse of the Aztec Empire. New York: Osprey Publishing. Read More
Share:
Tags
Cite this document
(“Ancient Mexico and the Spanish Essay Example | Topics and Well Written Essays - 500 words”, n.d.)
Retrieved from https://studentshare.org/history/1601438-ancient-mexico-and-the-spanish

CHECK THESE SAMPLES OF Ancient Mexico and the Spanish

...as “Old Mexico” for its major agricultural activities which comprise small town and attractive colonial cities that have made Mexico a famous global heritage site. Southern Mexico is renowned as an ecotourism sanctuary which consists of sea coasts, jungles, marshes and mangrove forests that provide adventure as well as beautiful natural site for any tourist. Pacific coast is considered as the ‘jewel in Mexico’s crown’ which provides historic attraction such as Acapulco (Foreign & Commonwealth Office, “Mexico: Country Information”). Groups of People That Make up Mexico According to the present scenario, Mexican people are a blend of...
3 Pages(750 words)Essay

.... It confirmed the victory of Cortes and under him the Spanish invaded the territory and ruled it as the Viceroyalty of New Spain. This is what would become Mexico later on. The Spanish rule continued in Mexico for the next 300 years till 1810 when the Mexicans led their first revolution to freedom which they gained in 1821. The colonial Spanish rule witnessed territorial expansion across a huge part of Central America and a lot of it to the south and west of what is now the United States. Trade and commerce swelled and the time saw a flourishing mining, textile, and agrarian economy. There was large scale religious conversion to Roman Catholicism....
4 Pages(1000 words)Term Paper

Victor & Vanquished: Spanish & Nahua Views of the Conquest of Mexico

...Analysis of Victor & Vanquished: Spanish & Nahua Views of the Conquest of Mexico Studies show that the Northern Hemisphere kept plenty of history, which described various conquests and wars. Part of this history indicates the conquest of the Mexica or Aztec Empire and its subsequent downfall is very significant as it was hugely defining. Despite the presence of different proceedings describing other wars and conquests, the Mexica is more preferable given that resource findings reveal that it was the largest empire ever built in Central America1. The story looks and reads more like a script of a movie wherein, an infinite collection of Spanish conquistadors ends up taking down a whole...
6 Pages(1500 words)Book Report/Review

...earliest traces in the ancient days of Mesoamerica. Netzahualcoyotl is the most well known pre-hispanic poet. The events and circumstances after the Spanish conquest inspired many themes in the Mexican literature. Similar is the case with the Mexican Revolution which had its influence on the Mexican literature and its cinema alike. Mexican cinema flourished in the period between 1935 and 1959. There are many filmmakers who hail from Mexico and are famous worldwide today. Mexico celebrates its independence from Spain on September 16. Dia de Nuestra Senora de Guadalupe ("Guadalupe Day") is widely considered as the most important religious holiday for...
3 Pages(750 words)Essay

...﻿Mexico Introduction The official of Mexico is the United Mexican s. Its location lies in the north of Guatemala and Belize, and south of the U.S. in the North America continent. On the basis of land area, Mexico is the 13th largest country in the world. Its coastline lies along the Gulf of Mexico, Pacific Ocean, and the Caribbean Sea. It is regarded as the counterpart of U.S. in Latin America, when it comes to economic abundance, and ranked as the 11th most populated nation in the world (Beezley, 2010). Although it is a socioculturally diverse country, it is the largest Spanish-speaking country in the world. The country has more than 50 different...
15 Pages(3750 words)Term Paper

Conquest of Mexico by Spanish Conquistadors

...Conquest of Mexico by Spanish Conquistadors During the years when Latin America was being conquered, Hernan Cortes served as one of the most influential and popular conquistadors from Spain. He gained notable popularity after winning Aztec empire before winning Mexico for the Spaniards. Cortes also facilitated in the colonization of Cuba before serving as New Spain’s governor. As a young boy, for instance, Cortes was developed notable interest in the Age of Exploration (Schmal). In 1504, he embarked on a mission to sail to the New World when aged 19 years. While in Hispaniola for seven years, he used to serve as a farmer and a notary. In 1511, he embarked on an expedition with Diego...
3 Pages(750 words)Essay
sponsored ads
Save Your Time for More Important Things
Let us write or edit the essay on your topic "Ancient Mexico and the Spanish" with a personal 20% discount.
GRAB THE BEST PAPER

Let us find you another Essay on topic Ancient Mexico and the Spanish for FREE!