Comments (0)
Add to wishlistDelete from wishlist
Cite this document
Summary
Despite the fact that science and industry dominate the modern day’s proceedings, yet the rights of humans are crushed in different parts…
Download full paperFile format: .doc, available for editing
HIDE THIS PAPERGRAB THE BEST PAPER94.8% of users find it useful 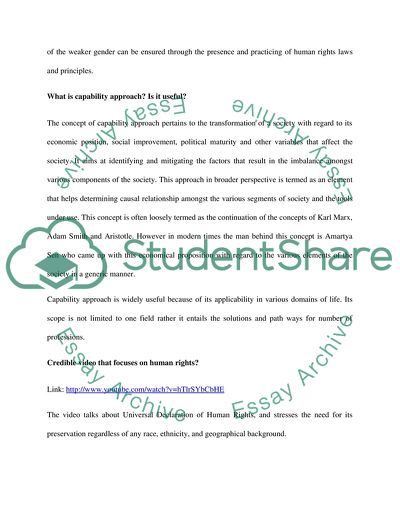 What are the major issues of human rights? The concept of human rights violation is not a new one and has continued along different societies and civilizations over period of time. Despite the fact that science and industry dominate the modern day’s proceedings, yet the rights of humans are crushed in different parts of the world. Across the globe, human rights are violated in different forms. On Individual front, the element of racism is found in nearly every second society, where people are discriminated by their creed and race rather than their personal abilities and human rights. On mass level, various countries are being governed by unelected heads of state whose tyrannies have made people’s life miserable. Raising the voice for an independent and free form of government is the basic right of each individual.
Besides this, civil rights are being violated all over the world which is against the charter international of human rights. Injustice on domestic and international level, lack of freedom of speech, and expression are few of the issues being faced in terms of human rights.
How are gender and human rights related?
Gender and human rights are usually co related in terms of their relevance to each other. The fair gender is often subjected to inhumane treatment, sexual abuses, and physical assaults. Protection against all these aforementioned factors is possible through the fulfillment of the human rights accords. The human rights laws entail all those necessary steps and proceedings which ensure protection of the weak. Besides the physical aspect, the weak gender is often subject to number of restrictions and confined to four walls. It is totally against the human rights. Hence, protection of the weaker gender can be ensured through the presence and practicing of human rights laws and principles.
What is capability approach? Is it useful?
The concept of capability approach pertains to the transformation of a society with regard to its economic position, social improvement, political maturity and other variables that affect the society. It aims at identifying and mitigating the factors that result in the imbalance amongst various components of the society. This approach in broader perspective is termed as an element that helps determining causal relationship amongst the various segments of society and the tools under use. This concept is often loosely termed as the continuation of the concepts of Karl Marx, Adam Smith and Aristotle. However in modern times the man behind this concept is Amartya Sen who came up with this economical proposition with regard to the various elements of the society in a generic manner.
Capability approach is widely useful because of its applicability in various domains of life. Its scope is not limited to one field rather it entails the solutions and path ways for number of professions.
Credible video that focuses on human rights?
Link: http://www.youtube.com/watch?v=hTlrSYbCbHE
The video talks about Universal Declaration of Human Rights, and stresses the need for its preservation regardless of any race, ethnicity, and geographical background.
Works Cited:
Feyter, K. D. (2005). Human Rights: Social Justice in the Age of the Market. Zed Books. Read More
Share:
Tags
Cite this document
(“Human Rights Essay Example | Topics and Well Written Essays - 500 words”, n.d.)
Human Rights Essay Example | Topics and Well Written Essays - 500 words. Retrieved from https://studentshare.org/history/1601127-human-rights

The Emerging areas of Social Software

...of the attacks (Syria chemical attack, 2013). Samples obtained from the attacked areas by the Organization for the Prohibition of the Chemical Weapons, confirm the presence of sarin, a nerve agent, found in a majority of rockets used in the attacks. These findings are consistent with the organophosphate intoxication found in the blood and urine samples of those who survived the attacks. Reports from the Human Rights Watch have found no evidence for the use of huge quantities of chemicals and possession of rockets by the opposition forces (Syria chemical attack, 2013). However, despite several concrete reports on the role of Syrian government in the attacks, the regimen has denied any role in the attacks...
2 Pages(500 words)Research Paper
sponsored ads
Save Your Time for More Important Things
Let us write or edit the essay on your topic "Human Rights" with a personal 20% discount.
GRAB THE BEST PAPER

Let us find you another Essay on topic Human Rights for FREE!