Comments (0)
Add to wishlistDelete from wishlist
Cite this document
Summary
The following essay "The Mesopotamians" describes the life of the Mesopotamians. It is mentioned that they had a pessimistic view even of their gods. In addition, this pessimistic view of life is reflected even in some of their art.
…
Download full paperFile format: .doc, available for editing
HIDE THIS PAPERGRAB THE BEST PAPER97.4% of users find it useful 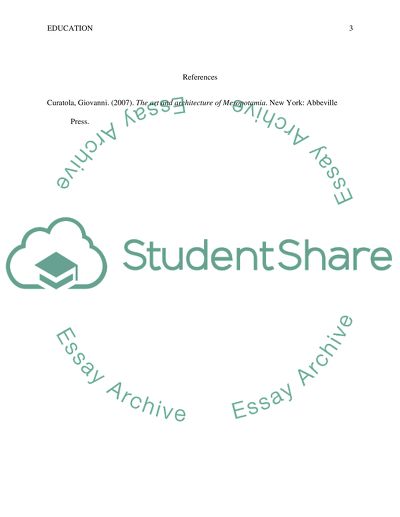 Extract of sample "The Mesopotamians"

﻿
The Mesopotamians
The Mesopotamians had a generally pessimistic view of life. How do the arts of their civilization reveal this? Use at least one example to illustrate your points.
The Mesopotamians had a pessimistic view of life because of the uncertainty in their lives. They were uncertain because of how land their land was open and the rivers were difficult to control. This pessimistic view of life was reflected even in some of their art. They revealed their pessimism through hiding statues and other arts about the things they were pessimistic about in their culture.
They had a pessimistic view even of their gods. They viewed them as caprious and had to constantly struggle with their whims. This affected their art and especially when designing their temples. The designing and art work of the temples were in such a way that the statues of their gods were hidden or interrupted. This way, they became distant and difficult to be seen (Curatola, 2007).
What other features of this culture does the art reveal?
Other than the pessimism revealed in the art of the Mesopotamians, other features that the culture’s art reveal depend on the type of art being made. The art indicating nudity revealed that frailty and destitution of those individuals killed or enslaved in war. Vases on the other hand revealed that the Mesopotamians were people who presented offerings to their goddess during important ceremonies like marriages. The art also revealed that they valued and respected their rulers and leaders and this was depicted in arts of their leaders once they died.
References
Curatola, Giovanni. (2007). The art and architecture of Mesopotamia. New York: Abbeville Press. Read More
Share:
Tags
Cite this document
(“The Mesopotamians Essay Example | Topics and Well Written Essays - 250 words”, n.d.)
Retrieved from https://studentshare.org/history/1598166-the-mesopotamians

CHECK THESE SAMPLES OF The Mesopotamians

Egypt and Mesopotamia before 3000 BC

The Primitives, Burials and Myths of Mesopotamia

Explain what the ancient Mesopotamians, Egyptians, Hebrews and Greeks thought and felt about happiness

...making them and has in common the fact despite the fact that what makes one happy does not necessarily translate to others, everyone strives for it in their own way. Therefore, it is important to evaluate the perceptions of happiness by ancient civilizations namely the Greeks, Mesopotamians, Egyptians and Hebrews in order to understand their various interpretations and applications of the concept. Greek philosophers are easily the most influential figures in matters pertains philosophical thought and predictably, they had much to say about happiness. According to Socrates, popularly known as the father of philosophy, the key to happiness is to be found in incisive self-examination and critical questioning ones morality...
3 Pages(750 words)Term Paper

Mesopotamians Polytheism and The Epic of Gilgamesh

... History and Political Science 30 September Mesopotamians Polytheism and the Epic of Gilgamesh The Mesopotamians had a spiritual view of their world which was of utmost significance to their culture. They believed that the gods were living, real and influenced all features of their lives. Although the leaders organized their armies for war, success in their battles depended on a good relationship with the gods. Mesopotamian city states were earthly imitations of divine order and model. Every city state was linked to a god or a goddess making it sacred. Nippur city state for example, was dedicated to the god of the wind known as Enlil. Occupying a number of acres was a temple complex at the heart of each city-state. It comprised... of a...
4 Pages(1000 words)Essay

.... Egyptian irrigation systems permitted them to control their agricultural practices. Egyptians were also able to redirect floodwaters away from certain places like gardens and cities. Further, unlike the Mesopotamians who grew subsistence food, the Egyptians grew staple foods and industrial crops such as papyrus and flax. In Egypt, religion and agriculture were intertwined unlike in Mesopotamia where the Mesopotamians valued science. For instance, many of Egyptian observations centered on their observation of the Nile, agriculture, and environment. The Egyptians used religion to describe and explain natural occurrences such as agricultural yields and the flooding of the Nile River (Bentley and Ziegler...
3 Pages(750 words)Research Paper

...cults and rituals, hymns and prayers that were transcribed by the priests and priestesses of the temples. Mesopotamian thought process and religious ideas were characterized by polytheism coupled with a unique pessimism. In Mesopotamia, city-states were theocracies. The king was regarded as the political and religious leader of the city-state. He was the people's representative to the gods, and was the 'First Servant' of the gods to the people. Individual city-states often adopted a patron god to worship as their chief god. but recognized the validity of other gods and worshipped them on appropriate occasions. However, one god would be chosen as a patron god to aid them in time of war or...
6 Pages(1500 words)Essay

Details summary of the book Simplexity

Describe the first ancient civilization of the Mesopotamia. Why was this region so heavily populated compared to other areas of the world What type of religion did they have Did religious teaching influence daily life Did the civilizations that fol

...Client’s 23 January Mesopotamian civilization is one of the oldest civilizations; Mesopotamians were very progressive and took appropriate steps to make significant progress. They placed special emphasis on education and knew that it was an important part of life. “Formal education was practical and aimed to train scribes and priests. It was extended from basic reading, writing, and religion to higher learning in law, medicine, and astrology.” (A Place for Civilization to Begin) The Mesopotamians were religious and believed in several deities, they also believed that water existed almost everywhere. They also believed in an air God and there were several other deities who existed for...
1 Pages(250 words)Essay

...HISTORY Part I agree with you that Mesopotamians had a lot to contribute to science, government and medicine. Mesopotamians fascinate me with their curiosity for detail and their ease of finding solutions to problems they face or things they do not understand. In science, their contribution to calculating time and the movements of heavenly bodies is the foundation of understanding and study of heavenly bodies. Their attention to balance their accounting is the reason we have accounting. In medicine, they made inventories of different signs and symptoms of a range of diseases that the physicians encountered that piqued their curiosity1. To be successful, the physicians, who performed operations did...
2 Pages(500 words)Essay
sponsored ads
Save Your Time for More Important Things
Let us write or edit the essay on your topic "The Mesopotamians" with a personal 20% discount.
GRAB THE BEST PAPER

Let us find you another Essay on topic The Mesopotamians for FREE!