Comments (0)
Add to wishlistDelete from wishlist
Cite this document
Summary
This paper, based on a visit to the site, seeks to summarize its main features. The paper will also identify strengths and weaknesses associated with the site and gained…
Download full paperFile format: .doc, available for editing
HIDE THIS PAPERGRAB THE BEST PAPER96.5% of users find it useful 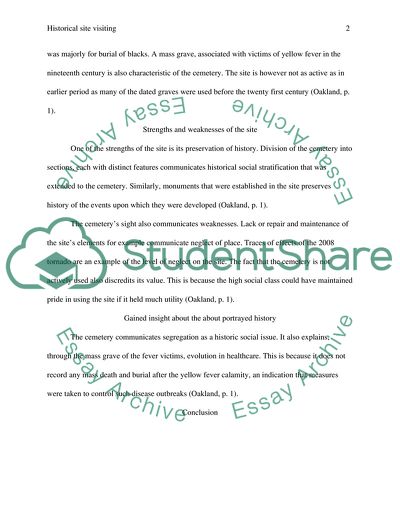 Historical site visiting Oakland cemetery is one of the identified historic sites around Oakland and is a nationally recognized. This paper, based ona visit to the site, seeks to summarize its main features. The paper will also identify strengths and weaknesses associated with the site and gained knowledge from its history.
Main elements
The Oakland cemetery has a number of observable features, some of which were derived from real events. One of the observable elements of the cemetery is a monument that was erected in honor of Atlanta’s first mayor. This monument is located near one of the site’s towers. Another identifiable element at the site is a mausoleum located on a hill. The mausoleum was named after its constructor, Austell. A lamp with marks from Atlanta’s bombing of the nineteenth century is also a feature of the site. The lamp is located near one of the site’s major graves. The cemetery is also identified with burials of prominent historic people in the locality. It is a resting place for a number of former local mayors (Oakland, p. 1).
Diversity and stratification is another observable feature of the site. It is divided into sections, each with distinct characteristics. The most notable is the ‘Confederate’ area that is identified for burial of civil war soldiers. A monument, called ‘confederate obelisk’ that was established to mark the end of civil war, rest in the section. There is also an identifiable area with Jewish culture embedded in the graves’ designs. ‘Potter’s section’ and ‘black section’ are also identified sites of the cemetery that illustrate segregation on economic and racial basis. It is explained that the poor, who could not afford graveyards were buried at the potter’s section while the designated ‘black section’ is associated with the period of racial discrimination and was majorly for burial of blacks. A mass grave, associated with victims of yellow fever in the nineteenth century is also characteristic of the cemetery. The site is however not as active as in earlier period as many of the dated graves were used before the twenty first century (Oakland, p. 1).
Strengths and weaknesses of the site
One of the strengths of the site is its preservation of history. Division of the cemetery into sections, each with distinct features communicates historical social stratification that was extended to the cemetery. Similarly, monuments that were established in the site preserves history of the events upon which they were developed (Oakland, p. 1).
The cemetery’s sight also communicates weaknesses. Lack or repair and maintenance of the site’s elements for example communicate neglect of place. Traces of effects of the 2008 tornado are an example of the level of neglect on the site. The fact that the cemetery is not actively used also discredits its value. This is because the high social class could have maintained pride in using the site if it held much utility (Oakland, p. 1).
Gained insight about the about portrayed history
The cemetery communicates segregation as a historic social issue. It also explains, through the mass grave of the fever victims, evolution in healthcare. This is because it does not record any mass death and burial after the yellow fever calamity, an indication that measures were taken to control such disease outbreaks (Oakland, p. 1).
Conclusion
Oakland cemetery is one of the identified historic sites near Oakland. A visit to the site communicates history of segregation, civil war, and natural calamities. The site has been neglected despite its role as a historic site.

...?Visiting the I am at Fire Island National Seashore, preparing to view Betty Beaumont’s creation “Ocean Landmark”, which she created in 1980 using 500 tons of processed coal-waste and laid on the floor of the Atlantic Ocean’s continental shelf as an artistic sculpture (Art & Technology Collaboration). I have decided to travel to New York and make a trip to Fire Island to see this piece because this sculpture made of volatile, toxic materials has been transformed into a thriving marine ecosystem and brought renewed life to the ecosystem. By creating this piece, Betty Beaumont is trying to let us all know we can take the potentially harmful waste we produce and create something that is helpful to the environment. A...
2 Pages(500 words)Essay

...(Hawaii e-travel 2011). The development of Pearl Harbor as a historical site has been gradual. The whole area is under the management of the National Park Service (NPS). The above authority initiated the establishment of the USS Arizona Memorial; at a next level, three more historical sites were established, USS Bowfin Submarine Museum, the USS Missouri or Mighty Mo and the acific Aviation Museum (Fischer 2011). All these areas are part of Pearl Harbor, as a historical site. Tourists need to pay a fee for visiting these sites and need to follow the instructions as including in the relevant tour...
4 Pages(1000 words)Case Study

...of England in age (Peillon and Slater, 1998). Build during the medieval neolith age, Boyne Valley is recognized world heritage site. For tourists interested in ancient agrarian practices, the Ceide Fields is the place to visit. Ceide fields are the oldest farming systems in the world, dating back to over 5,000 years ago. Christ Church Cathedral is another ancient building in Ireland, which was a former cathedral for the both Church of Ireland and the Roman Catholic archbishops in Dublin (Irishtourism.com 2012). Ireland is endowed with many other historic buildings and artefacts. Visiting the country guarantees satisfaction to all visitors, interested in wide range of...
5 Pages(1250 words)Research Paper

...Visiting the Council In the end of working day it was very crowded next to the building of our Council, so I could observe some interesting individuals and actions. First of all, there was a small group of aged men, who were discussing some recent political issues, such as the latest situation in Congress and international policy of our President George W. Bush. They spent quite a lot of time next to the building and then got slowly dissolved in the crowd of passers by. Also, I could observe three guys, who were distributing some promotion materials of a new brand of water for domestic use. They were saying that water in our city lines was going more and more terrible, so buying some drinking water was vital. As it...
2 Pages(500 words)Essay

...﻿ Visiting a kindergarten I love kindergarten except when I get in trouble. Sister Mary Joseph can get very huhu if you visit too much and I like to visit a lot. Sometimes I get a smack on my hand with a ruler for visiting. My mom says it’s because I’m lonely, cuz I don’t have any brothers or sisters; she says that I have to try not to visit so much. But I don’t feel lonely and I don’t know how Sister Mary Joseph would know that anyway. I just know that I love kindergarten because I really love my friends - especially Sarah. I met Sarah after a few days of school and when I first saw her I thought that she was very, very white. Like a real Snow White...
9 Pages(2250 words)Essay

...Lecturer’s presentation: National Portrait Gallery and American Art Museum The National Portrait Gallery and the Smithsonian American Art Museum in Washington DC are two magnificent facilities situated on the Ninth streets. This was one of the most attractive places that I visited. Once inside, the feeling of satisfaction is normally overwhelming for a visitor. Opening at 11.30 a. m and closing at 7.00 p. m allows the visitors to have ample time for viewing and learning. Once inside, time was not a factor since there was so much to observe. Artistic representations of celebrities, important personalities of the past governments, critical thinkers as well as villains are found in the portrait gallery represented through...
4 Pages(1000 words)Research Proposal

...Introduction The exact of the church that I visited is the Roman Catholic Church; this church is within the vicinity of my neighborhood. This makes it very convenient for the Christian around who don’t want to travel distance just to attend a service. This church has attracted my attention for the past few months and this research; I can say it is timely. Every Sunday during the churches’ worship gathering I will always see at most six auto mobiles. About a month ago the messages on the churches’ signboard has been changing almost every week. And the messages seemed to be following a sequence of scripture verses from the book of 1 peter. And the first time I bothered to read said “judgment must begin at the house of...
6 Pages(1500 words)Research Paper

...Invitation Letter To, ABC, The Immigration Department, USA. Dear Sir, My is __ and I am __ years old; my birth being ___. My nationality is __ and at the moment I am residing in the __ city of USA and my address is ___. I may be approached at this phone number:___. I am a ___ (Permanent resident/American citizen) and a copy of my status is appended with this application for reference and use. At the moment, I am willing to invite my cousin Adeniyi Adedeji to United States. He is __ years old and his date of birth is ___. At the moment he is residing in the __ city of __ (country). His purpose of visit is to see me and our relative / friends who are residing in the US. He plans to stay with me during his...
1 Pages(250 words)Essay
sponsored ads
Save Your Time for More Important Things
Let us write or edit the essay on your topic "Historical site visiting" with a personal 20% discount.
GRAB THE BEST PAPER

Let us find you another Essay on topic Historical site visiting for FREE!