Comments (0)
Add to wishlistDelete from wishlist
Cite this document
Summary
The idea of this research emerged from the author’s interest and fascination in why the U.S government target on Japan’s Hiroshima and Nagasaki in 1945…
Download full paperFile format: .doc, available for editing
HIDE THIS PAPERGRAB THE BEST PAPER98.9% of users find it useful 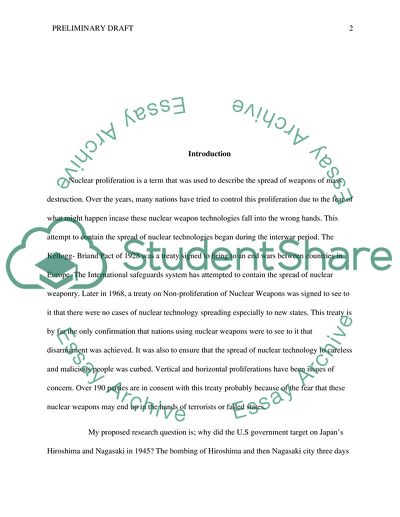 ﻿
Proliferation
Name
Institution
Introduction
Nuclear proliferation is a term that was used to describe the spread of weapons of mass destruction. Over the years, many nations have tried to control this proliferation due to the fear of what might happen incase these nuclear weapon technologies fall into the wrong hands. This attempt to contain the spread of nuclear technologies began during the interwar period. The Kellogg- Briand Pact of 1928 was a treaty signed to bring to an end wars between countries in Europe. The International safeguards system has attempted to contain the spread of nuclear weaponry. Later in 1968, a treaty on Non-proliferation of Nuclear Weapons was signed to see to it that there were no cases of nuclear technology spreading especially to new states. This treaty is by far the only confirmation that nations using nuclear weapons were to see to it that disarmament was achieved. It was also to ensure that the spread of nuclear technology to careless and malicious people was curbed. Vertical and horizontal proliferations have been issues of concern. Over 190 parties are in consent with this treaty probably because of the fear that these nuclear weapons may end up in the hands of terrorists or failed states.
My proposed research question is; why did the U.S government target on Japan’s Hiroshima and Nagasaki in 1945? The bombing of Hiroshima and then Nagasaki city three days later were considered the two single terror acts ever. U.S.A, planned to attack Japan so as to subdue it. Before America attacked Japan and other states, it sent leaflets around warning them of the impending attacks. The leaflets further said that the U.S.A was aware of these cities harboring warehouses and factories with nuclear weapons. The leaflets also said that there was need to end the war and that the only way this was going to be achieved is by sabotaging all the weapons of mass destruction. America administered this warning with the aim of making the civilians flee the mentioned cities before the attacks. This sanction that was placed on Japan was not out of spite for the Japanese people but the weapons that were made in that country. This event in history is important as it looks into the ways that different states used so as to curb the problem of weapons of mass destruction falling into the wrong hands. In this case, America was aware that the weapons under the custody of Japan were going to fuel the World War II further. The Japanese government surrendered on 10th August 1945. Conventional thoughts hold that Truman’s intention was to save humanity from the many effects that were to be brought by the improper use of nuclear weapons. This stipulation is applicable in this event as it tries to bring out clearly the intentions that the United States of America had on Japan It clearly tells of the strategies that were used and explains the reasons behind using these strategies. The fact that President Truman decided to send fliers around is the strong point of this thought; to register a warning in advance.
Important sources for this proposal are the book “Why Nuclear Disarmament Matters” by Hans Blix and William Potter’s “Forecasting Nuclear proliferation in the 21st C: The Role of Theory”
References
Blix, H. Why Nuclear Disarmament Matters. New York: MIT Press, 2008.
Potter, W. Forecasting Nuclear Proliferation in the 21st C: The Role of Theory. New York :
Stanford University Press, 2010. Read More
Share:
Tags
Cite this document
(“Nuclear Proliferation Essay Example | Topics and Well Written Essays - 500 words”, n.d.)
Retrieved from https://studentshare.org/history/1592104-during-the-interwar-period-states-tried-to-limit-the-size-of-naval-fleets-at-the-washington-conference-in-1921-1922-and-with-the-kellogg-briand-pact-in-1928-see-your-ugcc-textbook-page-109

CHECK THESE SAMPLES OF Nuclear Proliferation

...carried out by Otto Frisch in 1939 (WNA, 2010). From that time on, the idea of harnessing the nuclear fission ranged the way from a tempting possibility to an alluring opportunity in both scientific laboratories and politicians’ cabinets, to eventually reach its notorious first practical application in Hiroshima and Nagasaki in 1945 (WNA, 2010). 1. Nuclear Disarmament and Non-Proliferation 1.1 Definitions and conceptions Nuclear weapons are beyond a shadow of a doubt the most dangerous weapons the human civilization has ever known, with an enormous potential for devastation and far-reaching implications for the life on earth (UNODA, n.d.). Apart from the bombings in...
33 Pages(8250 words)Essay

Nuclear Proliferation: If more states acquire nuclear weapons, will the world be more or less peaceful and stable

...?Identification and of the Debate Kenneth Waltz’s Peace, Stability and Nuclear Weapons and Scott Sagan’s The Perils of Proliferation in South Asia both detail the discussion of how best to assess the proliferation of nuclear weapons, especially in regimes that are emerging, unstable, or “third-world.” While some political scientists see nuclear weapons as a threat to stability and peace because of mass destruction capability and the potential for horrific fallout from geographic, ethnic, and political instability, others see those weapons as the very power resources that can maintain a proper balance of power between regimes at times of tension, cold conflict, and low level conventional battles. The importance of this debate... in...
3 Pages(750 words)Essay

...? s School Topic Japan`s Stance on North Korean Nuclear Proliferation: Policy Paper North Korea is actively pursuing its Nuclear Proliferation program despite the coercive diplomatic measures pertained by the great powers (Niksch 2001)., and the threat perceptions regarding the nuclear deterrence in context to Asian states has significantly been enhanced after the third nuclear test recently launched by North Korea In this context, it is not viable for Japan to rely on the extended deterrence of its allies (predominantly USA), as North Korea is believed to own middle range Rodong missiles which has intensified the...
8 Pages(2000 words)Research Paper

...? Nuclear Proliferation in North Korea The risk of nuclear terrorism engaging radiological weapons has increased the possible risks on nuclear explosions. Importantly, considering the global statute, any application of nuclear weapons through an uprising unit could illustrate a severe infringement of the statutes of war. These statutes have remained forwarded to cope with non- governmental performers in global politics as per Article 3, similar to the four Geneva Principles of August 1949. Procedure 1 makes the statute regarding global conflict used in wars fought for self-protection versus rival profession and versus colonialist and ethnic regimes (Beres, 1994). In assessing the constitutionality of North Korea’s nuclear schedule... ...
10 Pages(2500 words)Essay

...NUCLEAR NON-PROLIFERATION The prevention of proliferation of weapons of mass destruction (WMD) and more specifically of nuclear weapons has long seen a key driver of United States foreign policy. However, various non-proliferation initiatives have only met with mixed success, as is evidently from the nuclear stand-off in the Korean Peninsula and the Iran nuclear imbroglio, not to mention Pakistan's clandestine proliferation network spearheaded by AQ Khan. In the world of real-politic, nation-states will continue to jockey for superiority over one another to attain a semblance of balance of power, " a theory of state behavior [that] explains and predicts how states respond to threats posed by a potentially dominant, revisionist... and...
8 Pages(2000 words)Essay

...Is President Obama’s nuclear non-proliferation policy realistic? Section What is the issue? President Barack Obama has envisaged an innovative nuclear policy that can turn out to be realistic if nations around the world are cooperative for the greater good of mankind. Nuclear terrorism and nuclear proliferation are the two threats President Obama has emphasized the international community should act upon to avoid nuclear arms race, potential nuclear war and terror that could be of an unimaginable scale. The policy encourages nations to pledge to decrease nuclear weapons, endorse the CTBT...
2 Pages(500 words)Essay

...International Relations and Strategic Studies: What are the main arguments for and against the horizontal proliferation of nuclear weapons? Warfare is one of the most tragic institutions devised by humans. Many philosophers and intellectuals of by gone eras have pondered over the destruction left by war. They have questioned the merits behind purported motives for war. The scale of human and material loss incurred in wars is hard to justify through reasoning. If conventional warfare is bad enough then nuclear confrontation is even more catastrophic. The only known instances of the deployment of nuclear bombs happened toward the closing days of World War II, when...
6 Pages(1500 words)Essay

...﻿Nuclear proliferation Introduction The spread of nuclear weapons is an important issue in world politics. The atomic drops on Japan in 1945 were significant for many reasons. They not only persuaded the Japanese to surrender in the Second World War, but also ushered in an era during which nuclear weapons became the principal means of maintaining international order. The issue of nuclear proliferation is a very important issue concerning world politics. The fear of such weapons and the catastrophic destruction they are capable of the debate of further proliferation or non-proliferation efforts remains a...
8 Pages(2000 words)Essay
sponsored ads
Save Your Time for More Important Things
Let us write or edit the essay on your topic "Nuclear Proliferation" with a personal 20% discount.
GRAB THE BEST PAPER

Let us find you another Essay on topic Nuclear Proliferation for FREE!