Comments (0)
Add to wishlistDelete from wishlist
Cite this document
Summary
Thomas Jefferson and Alexander Hamilton came up with contrasting views that led to the formation of two parties with different…
Download full paperFile format: .doc, available for editing
HIDE THIS PAPERGRAB THE BEST PAPER96.1% of users find it useful 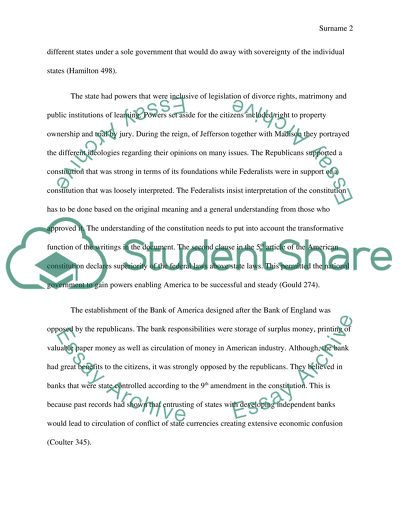 Task: Federalist vs. republican debate Introduction The most significant precedent started by Federalist administrations found in Washington and was the introduction of the two parties in America. Thomas Jefferson and Alexander Hamilton came up with contrasting views that led to the formation of two parties with different ideologies. The Republican Party had a strong believe for a restricted government intervention which divided the citizens of American support. The paper tries to analyze both ideologies of the two parties.
The Federalist and republican ideologies
The federalist perception was a greater governmental involvement in the state activities. The republicans were against a solid central government and focused mostly on a state oriented government. Thomas Jefferson as a republican was against the approval of the new constitution. This is because they hold the perception that a closer government would make it easy for people to hold it accountable, making it difficult for the government to avoid dictatorship rule. He encouraged sovereignty of the different states, making states accountable and uniting the different states under a sole government that would do away with sovereignty of the individual states (Hamilton 498).
The state had powers that were inclusive of legislation of divorce rights, matrimony and public institutions of learning. Powers set aside for the citizens included right to property ownership and trial by jury. During the reign, of Jefferson together with Madison they portrayed the different ideologies regarding their opinions on many issues. The Republicans supported a constitution that was strong in terms of its foundations while Federalists were in support of a constitution that was loosely interpreted. The Federalists insist interpretation of the constitution has to be done based on the original meaning and a general understanding from those who approved it. The understanding of the constitution needs to put into account the transformative function of the writings in the document. The second clause in the 5th article of the American constitution declares superiority of the federal laws above state laws. This permitted the national government to gain powers enabling America to be successful and steady (Gould 274).
The establishment of the Bank of America designed after the Bank of England was opposed by the republicans. The bank responsibilities were storage of surplus money, printing of valuable paper money as well as circulation of money in American industry. Although, the bank had great benefits to the citizens, it was strongly opposed by the republicans. They believed in banks that were state controlled according to the 9th amendment in the constitution. This is because past records had shown that entrusting of states with developing independent banks would lead to circulation of conflict of state currencies creating extensive economic confusion (Coulter 345).
They also were against a state bank because the central government would have much authority. However, democrats held the view that formation of one bank in the country would unite all American creditors in supporting the present government. This would lead to boosting of the American economy and eradicating domestic faction. The policy was viewed by democrats as significant, as it permitted the government to form a solid banking system that amplified the authority of the central government, efficiency and comfort of its citizens (Black and Merle 126).
Conclusion
Jefferson clearly outlines his opposing views in document C about the national bank depicting the dissimilar views of both parties. Republicans interpreted the constitution strictly as proved in the known documents A together with B giving additional rights to the state by using the rights bill to prove that it provides the states with those rights. The republicans assumed that the American economy requires to be based on agriculture while Federalists insisted it depended on manufacturing and marketable economy (Simon 187).
Works Cited
Black, Earl, and Merle Black. The rise of Southern Republicans. New York: Harvard University Press, 2002. Print
Coulter, Ann H. If Democrats had any brains, theyd be Republicans. New York: Crown Forum, 2007. Print.
Gould, Lewis L. Grand Old Party: a history of the Republicans. New York: Random House, 2003. Print.
Hamilton, Madison. Federalist. London: Echo Library, 2011. Print.
Simon, Steve. The Republicans. London: Charta, 2005. Print. Read More
Share:
Tags
Cite this document
(“Discussion: federalist vs. republican debate Essay”, n.d.)
Discussion: federalist vs. republican debate Essay. Retrieved from https://studentshare.org/history/1591549-discussion-federalist-vs-republican-debate

CHECK THESE SAMPLES OF Discussion: federalist vs. republican debate

..., said he was "so disappointed" at the court’s decision that enabled the rightward corporatist tilt of the court. According to him, Chief Justice Roberts was simply “out of touch and completely detached from reality in politics.” Who do you agree with? Why? I do agree with the Obama and Reid in their comments given the fact that campaigns basically depend on resources. As such individuals as well as corporations have the right to participate on how the wished to be governed. 4. Judicial activism vs. judicial restraint is a both a historical and VERY current discussion in American politics. Judges have very different philosophies. Those who are nominated by the President are placed under heavy scrutiny by...
13 Pages(3250 words)Essay

... Question one. The views of the Federalists and the Anti-federalists on the role of the representatives derive from the ways in which each see therole of the federal, or central, government. The Federalists believed in a strong central government and they thought that it would protect the rights of individual citizens. In contrast, the Anti-federalists did not trust a strong central government and favored more the concept of "little republics" or states, each with their laws establishing their own authority to protect citizen rights and exercise power of government. Each of these positions had good and strong reasoning, as represented by James Madison in Federalist Letter #10 and the debating response by the writer 'Brutus'. Today... the...
2 Pages(500 words)Coursework

...? Palestinian vs. Israeli Debate of the of the Concerned July 12, Palestinian vs. Israeli Debate What is indeed admirable is the ability of the Israeli side to always resort to the right type of classification, to use just the right verbal tags and to unleash the right type of propaganda while explaining the Palestinian side of the conflict (Abourezk, 1980). It goes without saying that Israel to a great extent has been successful in dubbing the entire Palestinian struggle for independence as a terrorist movement, not to mention the much support and aid extended to Israel by the Western powers (Abourezk, 1980). In that context the proposal extended by the Israeli side is a...
2 Pages(500 words)Research Paper

...and Republicans reminds us of their basic ideologies that have strong influence on the kind of governance and move they could contribute to the country and its prevailing needs. It is therefore important to note that their ideologies could not be wronged at some point as they should exactly fit in the current needs of the nations. It is therefore for the people to decide which ideologies are much better to be fitted in the country’s prevailing situation. Cited Sources Bardes, Barbara A., Mark C. Shelley, and Steffen W. Schmidt. American Government and Politics Today: The Essentials. 15th ed. Boston: Cengage Learning, 2008. Print. Camia, C. (2012). Live blog: Obama, Romney spar in first debate. 03 Oct....
4 Pages(1000 words)Essay

...of the audience and this may have been as a result of his terminal condition. Blair, on the other hand, seems to have been less forceful with his argument, perhaps because of his sympathy for his rival’s condition. While this may have been the case, the posture of Blair throughout the debate seems to have been like that of a dull vicar giving another Sunday sermon. In fact, they were not strong enough to challenge the points that were made by Hitchens, to an extent that he ended up losing the debate. Hitchens seems to have taken full advantage of the sympathy felt for him by the audience to drive his points forth and this eventually led to his win. Works Cited CSPANJUNKIEd0Torg. “Christopher Hitchens...
3 Pages(750 words)Essay

...Compare and Contrast the Republican Party and the Democratic Party of the United s Introduction The United s is the most influential country in the world. It is the biggest democracy and one would expect it to have many political parties fighting closely for power. There are in fact only two major parties which have influenced Americans to shift their loyalties towards them and trust them for handling the only superpower in the world. Republican Party Background Although this elephant logo signifies strength and force, this is not the party in majority. This party traces its roots back to Abraham Lincoln who was the first republican president. It has since then faced many critical moments of the country's history like... the...
4 Pages(1000 words)Essay

Republican vs. democratic views on a problem

...Democratic versus Republican Ideology: ROUGH DRAFT BY YOU Democratic versus Republican Ideology There are many issues, ranging from differing party viewpoints of economic stability to the state of the domestic business climate, which divide democratic and republican leadership. Those who are affiliated with the Democratic Party tend to believe that short-term economic incentives for domestic citizens are the best method to boost the total economy. Republicans tend to believe that foreign spending and the accumulation of excess capital is a better long-term strategy for building national wealth and this group lacks substantial focus. Televised debates...
2 Pages(500 words)Essay

Federalist and Democratic-Republican attitudes toward the national government

...DISCUSSION RESPONSE TO EARLY HEAD START PROGRAM Response to Early Head Start Program The main purpose that led to the formation of Head Start program was to benefit children from poor families. Arguably, the Head Start program becomes ineffective during adulthood when the child graduates from the program. The ineffectiveness of the program appears when the child grows and face many challenges like lack of emotional support, financial problems as well lack of quality education, some are affected by increased divorces cases in America (Ruse, 2013). This clearly shows that head start program only benefits children at their early life stage but they are exposed to many difficult situations upon their growth, that is, after the end... RESPONSE TO...
1 Pages(250 words)Research Paper
sponsored ads
Save Your Time for More Important Things
Let us write or edit the essay on your topic "Discussion: federalist vs. republican debate" with a personal 20% discount.
GRAB THE BEST PAPER

Let us find you another Essay on topic Discussion: federalist vs. republican debate for FREE!