Comments (0)
Add to wishlistDelete from wishlist
Cite this document
Summary
How will this help the development of countries? Further, how is meeting this goal significant for the already developed countries?
The goal chosen is to achieve universal primary education…
Download full paperFile format: .doc, available for editing
HIDE THIS PAPERGRAB THE BEST PAPER97.3% of users find it useful 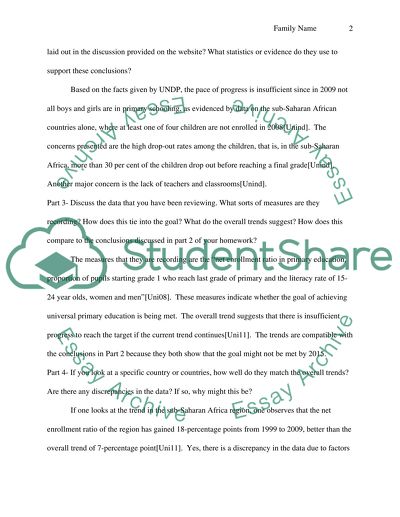 Millennium Development Part Write a short discussion of why this goal is essential for eliminating poverty. Howwill this help the development of countries? Further, how is meeting this goal significant for the already developed countries?
The goal chosen is to achieve universal primary education. This goal is essential in eliminating poverty because education paves the way for progress. “Studies have shown that education is correlated with poverty, inequality and economic growth” (Bruns, Mingat and Rakotomalala 1). According to a study by the World Bank, “education is fundamental for the construction of globally competitive economies and democratic societies” (Bruns, Mingat and Rakotomalala 1). Primary education will help the development of countries because it helps develop and improve the essential human learning and life skills which are necessary for gainful employment and productivity, which on the other hand are important for economic progress (Bruns, Mingat and Rakotomalala 2). This goal is still significant for developed countries because while most of the children in the urban areas are already given primary education, those in the rural or remote places many not have the same opportunity. Furthermore, the more educated people there are in other countries, the more the global economy improves, which affects all countries of the world whether they be underdeveloped, developing or developed.
Part 2- How successful are we globally in meeting this goal? What are the victories or concerns laid out in the discussion provided on the website? What statistics or evidence do they use to support these conclusions?
Based on the facts given by UNDP, the pace of progress is insufficient since in 2009 not all boys and girls are in primary schooling, as evidenced by data on the sub-Saharan African countries alone, where at least one of four children are not enrolled in 2008 (United Nations Development Programme , par 3). The concerns presented are the high drop-out rates among the children, that is, in the sub-Saharan Africa, more than 30 per cent of the children drop out before reaching a final grade (United Nations Development Programme , par 4). Another major concern is the lack of teachers and classrooms (United Nations Development Programme , par 5).
Part 3- Discuss the data that you have been reviewing. What sorts of measures are they recording? How does this tie into the goal? What do the overall trends suggest? How does this compare to the conclusions discussed in part 2 of your homework?
The measures that they are recording are the “net enrollment ratio in primary education, proportion of pupils starting grade 1 who reach last grade of primary and the literacy rate of 15-24 year olds, women and men” (United Nations Statistics Division 1). These measures indicate whether the goal of achieving universal primary education is being met. The overall trend suggests that there is insufficient progress to reach the target if the current trend continues (United Nations 17). The trends are compatible with the conclusions in Part 2 because they both show that the goal might not be met by 2015.
Part 4- If you look at a specific country or countries, how well do they match the overall trends? Are there any discrepancies in the data? If so, why might this be?
If one looks at the trend in the sub-Saharan Africa region, one observes that the net enrollment ratio of the region has gained 18-percentage points from 1999 to 2009, better than the overall trend of 7-percentage point (United Nations 17). Yes, there is a discrepancy in the data due to factors present in the different regions such as abolition of school fees or due to conflicts present in the poor countries or the lack of qualified teachers in the region (United Nations 17).
Part 5- Do you think the data tells the whole story here? If yes, why? If not, what other evidence might you like to see in support of the UNDP’s conclusions?
I do not think that the data tells the whole story because it does not show exactly how many new enrollees are there per year, per gender and per age. Factors which affect enrollment were not included in the research. Other evidence that one might see to support UNDP’s conclusions are the reasons why the children drop out of school even prior to completing primary education. Information about how much funding does the governments of each region allocate to free primary education will make one understand better why not all the children get access to primary education. Data on the possible barriers to getting a primary education must be gathered because once these are addressed, enrollment might be expected to rise. The barriers per region must be identified so appropriate solutions are undertaken on a per region basis.
Works Cited
Bruns, Barbara, Alain Mingat and Ramahatra Rakotomalala. "Achieving universal primary education by 2015: A chance for every child." 2003. siteresources.worldbank.org. 30 January 2012 .
United Nations Development Programme. "Where do we stand?" n.d. beta.undp.org Web site. 30 January 2012 .
United Nations Statistics Division. "Official list of MDG indicators." 15 January 2008. mdgs.un.org. 31 January 2012 .
United Nations. "The Millennium development goals report 2011." 2011. mdgs.un.org Web site. 30 January 2012 . Read More
Share:
Tags
Cite this document
(“Millennium Development Goals Assignment Example | Topics and Well Written Essays - 500 words”, n.d.)
Millennium Development Goals Assignment Example | Topics and Well Written Essays - 500 words. Retrieved from https://studentshare.org/history/1588258-millennium-development-goals

...﻿My Six Millennium Development Goals Introduction In my analysis, I chose target 1 A, 1 B, 2 A, 3 A, 5 A, and 7 A because from my perception, they impact the society significantly and to a larger extend cover the other unmentioned goals. This analysis might not comprehend every aspect of the MDG; however, it covers the most crucial part. It is for this reason that I am forced to pick these six from the large list of MDG. The platform that led to the formation of the millennium development goals sought to ameliorate the lives of the societal poor. This is one of the eight goal goals set...
6 Pages(1500 words)Essay

...? UN Millennium Development Goals in Kenya Goal One: Eradicate Extreme Poverty and Hunger This is the first of the 8 millennium development goals. The goal had three targets. Target 1A was to halve the number of persons whose income is below a dollar a day between the year 1990 and the year 2015. Some of the indicators for this target are the proportion of people below one dollar per day, the poverty gap ratio, and the share of poorest quintile in nationwide consumption, (UN, 2007). While the world is still on tract to meet this poverty reduction target, the global economic crisis has slowed down the...
4 Pages(1000 words)Research Paper

...Contents Contents 2 The Millennium Development Goals: Not Just Lofty Ideals 3 2007 MDG Report Reveals "Uneven" Results 4 Issues of Feasibility 8 A Premise Problem 10 Difficulties in Monitoring and Evaluation 11 Reviewing the Role of Financial Assistance in Development 13 Recommendations for Bringing the "Future Within Reach" 15 Bibliography 17 The Millennium Development Goals: Not Just Lofty Ideals In 2000, 189 world leaders came together at the United Nations (UN) Summit to make a commitment to "free our fellow men, women and children from the abject and dehumanizing conditions of extreme poverty, to which...
14 Pages(3500 words)Essay

...Discuss the progress made by the international development community towards meeting these goals and say whether they will be achieved by the year 2015. According to The Millennium development Goals Reports of 2005 and 2006, Although Global poverty rates are declining, still there are millions who have fallen down strongly in more poverty in sub Saharan Africa where poor is becoming more destitute. There is advancement in fight against hunger but increasing population and agricultural growth's falling behind has led to severe setback in some regions like southern Asia and sub Saharan Africa. The aim is to halve the proportion of people enduring hunger...
4 Pages(1000 words)Book Report/Review

...Gender equality and empowering women is one of the most important goals of the Millennium Development Goals because ensuring gender equality is the very basic requirement for the eradication of poverty, hunger and disease. Since women make up almost half of the population of the world, achievement of MDGs is not possible without the empowerment of women. According to the targets the gender disparity in primary and secondary education should have been removed by 2005 and gender disparity in all other types of education must be removed by 2015. Considerable progress have been achieved with regards to gender equality in primary and secondary education and most regions of...
2 Pages(500 words)Essay

...Global Climate Change is perhaps the biggest challenge faced by human beings in today and the situation is worsening with every passing day. The changing climatic conditions of the world pose a very alarming situation because the achievement of all other Millennium Development Goals is directly or indirectly being suffered by global warming. The most unfortunate thing regarding climate change is the fact that the poorest people of the world who have no contribution towards the deterioration of the environment are suffering the most by global warming and the consequences can be detrimental for some of the communities if steps to preserve environment are not taken on urgent basis. The...
2 Pages(500 words)Essay

...Millennium Development Goals Geography 05/09 Article For a long time, women in Africa has been lagging behind from the rest of theworld that prompt Prior & Rubinstein to write about the new frontier in Africa. According to Prior & Rubinstein, educating women in Africa will open doors for a more prosperous continent given that women do most of their word attending to their families (Prior & Rubinstein, 2014). Moreover, when young girls attend to early and let to finish up to high level, the issues of early pregnancies are reduced and more, so minimal maternal death are recorded. Therefore, women literacy help in addressing the global insecurity among women and children. Rwanda is evidence that girl child is possible in every part... Development...
1 Pages(250 words)Assignment

...Millennium Development Goals (MDGs) Millennium Development Goals (MDGs) In the year 2000, the United Nations (UN) marked a significant step towards improvement of the global social environment by establishing the millennium developed goals, popularly referred to as MDGs. Through launching these distinctive goals, the UN sought to improve people’s quality of life, particularly targeting the underprivileged in various societies. It is imperative to take note of the fact that, MDGs constituted ideas originating from the most advanced global nations. These economically...
6 Pages(1500 words)Essay

The Millennium Development Goals of Nepal

...﻿MILLENNIUM DEVELOPMENT GOALS Throughout the world, countries have and continue to face various issues that hamper growth and development. However, this situation differs from one country to another. These issues include poverty, ignorance, inequality between men and women, diseases, and environmental degradation. Governments, with the support of international organizations, have endeavored over decades to eradicate or at least minimize the effects of these issues and their impact to development. It is with the same notion that the Millennium Development Goals, commonly referred to as MDGs, were...
7 Pages(1750 words)Essay
sponsored ads
Save Your Time for More Important Things
Let us write or edit the assignment on your topic "Millennium Development Goals" with a personal 20% discount.
GRAB THE BEST PAPER

Let us find you another Assignment on topic Millennium Development Goals for FREE!