Comments (0)
Add to wishlistDelete from wishlist
Cite this document
Summary
According to The Millennium development Goals Reports of 2005 and 2006, Although Global poverty rates are declining, still there are millions who have fallen down strongly in more poverty in sub Saharan Africa where poor is becoming more destitute. There is advancement in fight against hunger but increasing population and agricultural growth's falling behind has led to severe setback in some regions like southern Asia and sub Saharan Africa…
Download full paperFile format: .doc, available for editing
HIDE THIS PAPERGRAB THE BEST PAPER98.3% of users find it useful 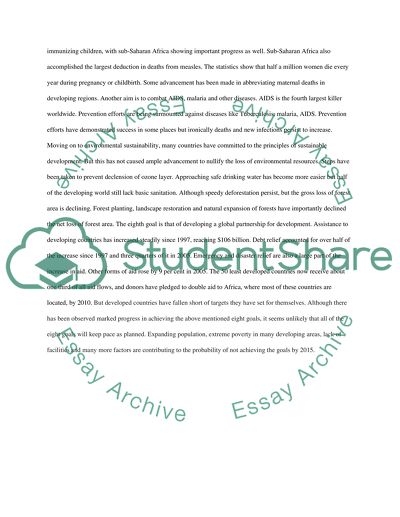 Download file to see previous pages In the early 1990s, the number of hungry people reduced; but it is ascending again. The second goal was to ensure universal primary education. It was found that children in rural areas are less likely to attend school. Also educational gender gap phenomenon stays. Five developing regions are approaching universal enrolment.Net enrolment ratios in primary education have increased to 86 per cent in the developing world, ranging from 95 per cent in Latin America and the Caribbean to 64 per cent in sub-Saharan Africa. Although the sub-Saharan region has made significant progress since 1990/1991, fewer than half the children of primary-school age are enrolled in school. Faster progress will also be needed if Oceania and Western Asia are to achieve universal education. Southern Asia, in contrast, has made great paces, especially over the period 1999-2004, when enrolment rose from 72 to 89 per cent largely as a result of progress in India. As far as encouraging gender equality and empowering women is concerned, gender gap is shrinking, but tardily. Women's political participation has increased markedly since 1990.Though progress is being arrived at; women still miss equal representation at the highest levels of government, occupying meagre 16 per cent of parliamentary seats worldwide. There has been an observed inequality in the labor market limiting women's economic advancement. When it comes to cutting down child mortality, again death rates in children under age 5 are declining but not rapid enough. More children are surviving their early years of life, though sub-Saharan Africa falls behind. Three out of four children are protected against measles, which still kill approximately half a million children yearly. The vaccination of three quarters of the world's children has proven to be one of the most cost-effective public health interventions on record. Latin America and the Caribbean made the greatest paces in immunizing children, with sub-Saharan Africa showing important progress as well. Sub-Saharan Africa also accomplished the largest deduction in deaths from measles. The statistics show that half a million women die every year during pregnancy or childbirth. Some advancement has been made in abbreviating maternal deaths in developing regions. Another aim is to combat AIDS, malaria and other diseases. AIDS is the fourth largest killer worldwide. Prevention efforts are being surmounted against diseases like Tuberculosis, malaria, AIDS. Prevention efforts have demonstrated success in some places but ironically deaths and new infections persist to increase. Moving on to environmental sustainability, many countries have committed to the principles of sustainable development. But this has not caused ample advancement to nullify the loss of environmental resources. Steps have been taken to prevent declension of ozone layer. Approaching safe drinking water has become more easier but half of the developing world still lack basic sanitation. Although speedy deforestation persist, but the gross loss of forest area is declining. Forest planting, landscape restoration and natural expansion of forests have importantly ...Download file to see next pagesRead More
Share:
Tags
Cite this document
(“The Millennium Development Goals Report Book /Review”, n.d.)
The Millennium Development Goals Report Book /Review. Retrieved from https://studentshare.org/miscellaneous/1532764-the-millennium-development-goals-report
(The Millennium Development Goals Report Book /Review)
The Millennium Development Goals Report Book /Review. https://studentshare.org/miscellaneous/1532764-the-millennium-development-goals-report.
“The Millennium Development Goals Report Book /Review”, n.d. https://studentshare.org/miscellaneous/1532764-the-millennium-development-goals-report.
Comments (0)
Click to create a comment or rate a document

CHECK THESE SAMPLES OF The Millennium Development Goals Report

Finding the Value of Pi

... by itself (Duncan Williamson, 2003) 1. Relevance of Investment Appraisal: While investing on any project, the company normally would have a choice. The management need to have a good understanding of each of these proposals and should be able to weigh the benefits and drawbacks of each proposal. All the decisions require a detailed analysis to assess whether or not the investment is feasible for the company. The feasibility of the project depends not only on financials of the company but also partly on non- financial factors (Bized – Finance and Investment, 2008). Companies have various choices for change and development. The senior management need to ensure that all the merits and demerits of the investment are taken... Appraisal and...
14 Pages(3500 words)Report

... vision of technical leadership are services, customer focus, growth platforms and globalization. Each of them are linked ultimately to maintaining the technical leadership that G.E. is widely famous for. The company invests aggressively in research and development to create technical breakthroughs that redefine markets, bring higher margins and bring new products and designs to the consumer. Its obsession with innovation is the fear that todays innovations will become commodities next year that will erode profit margins and wipe out its technological advantages. Its services sector is more on after-sales service in the areas of power generation, locomotion, flight and delivery of medical imaging equipment. The idea is to help...
12 Pages(3000 words)Report

9 Pages(2250 words)Assignment
sponsored ads
Save Your Time for More Important Things
Let us write or edit the book report/review on your topic "The Millennium Development Goals Report" with a personal 20% discount.
GRAB THE BEST PAPER

Let us find you another Book Report/Review on topic The Millennium Development Goals Report for FREE!