Comments (0)
Add to wishlistDelete from wishlist
Cite this document
Summary
Vladimir llych Lenin and Woodrow Wilson are the two contemporary leaders and social reformers from two different halves of the globe, antagonistic to each other in terms of their world view and social ideologies. Yet, there are certain paradigms on which the idealism of these…
Download full paperFile format: .doc, available for editing
HIDE THIS PAPERGRAB THE BEST PAPER98% of users find it useful 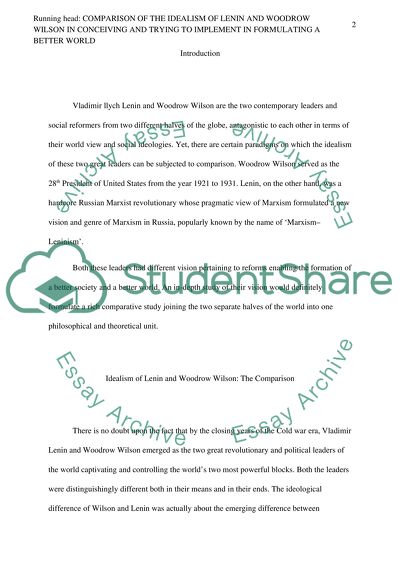 Comparison of the Idealism of Lenin and Woodrow Wilson in Conceiving and trying to implement in Formulating a Better World Introduction Vladimir llych Lenin and Woodrow Wilson are the two contemporary leaders and social reformers from two different halves of the globe, antagonistic to each other in terms of their world view and social ideologies. Yet, there are certain paradigms on which the idealism of these two great leaders can be subjected to comparison. Woodrow Wilson served as the 28th President of United States from the year 1921 to 1931. Lenin, on the other hand, was a hardcore Russian Marxist revolutionary whose pragmatic view of Marxism formulated a new vision and genre of Marxism in Russia, popularly known by the name of ‘Marxism–Leninism’.
Both these leaders had different vision pertaining to reforms enabling the formation of a better society and a better world. An in-depth study of their vision would definitely formulate a rich comparative study joining the two separate halves of the world into one philosophical and theoretical unit.
Idealism of Lenin and Woodrow Wilson: The Comparison
There is no doubt upon the fact that by the closing years of the Cold war era, Vladimir Lenin and Woodrow Wilson emerged as the two great revolutionary and political leaders of the world captivating and controlling the world’s two most powerful blocks. Both the leaders were distinguishingly different both in their means and in their ends. The ideological difference of Wilson and Lenin was actually about the emerging difference between evolution and revolution. It was a clash between liberalism and communism. The organic thought process from the Burke’s school of thought on one hand and the idealistic thought process from the Marxian school of thought became glaringly evident in their ideologies.
Wilson’s vision regarding the formulation of a better world was through the fulfillment of the progressive history. And much contrary to it, Lenin viewed it as a transition, an age that is quite critical in nature apprehensive of a degeneration of an older order and indication of a violent future. Lenin tried to implement a discourse pertaining to progressive revolution which he defines as inevitable in the history of the struggle of mankind. At this point, the contention of Wilson was different from that of Lenin. He viewed it as autocratic derailing of natural constitutional development. In their ideology and world vision, the realm where Wilson showed his calm and poise, Lenin displayed his aggression and violence.
Conclusion
Many American citizens placed their gullible opinions towards Lenin and much contrary to it; Bolsheviks totally displayed their distrust towards Wilson and his Treaty of Versailles. Both the prophets of future placed a utopian vision of world and society though the road traversed by Lenin is unanimously admitted as more detrimental. The political historians belonging to the idealist school of thought consider that both the political leaders possessed similar view pertaining to the totalitarian concept of sate and both of their thought sustained towards the attainment of goal and not towards the means of achieving it. Yet, a glaring contrast can be always traced between the ideology and vision. Both these leaders and their ways will be always distinguishingly separated through an abyss.
Bibliography
Lynch, M. (2005). Bolshevik and Stalinist Russia 1918-56. US: Trans-Atlantic Pubns.
Nordholt, J. W. S. (1991). Woodrow Wilson. US: University of California Press. Read More
Share:
Tags
Cite this document
(“Compare and contrast the idealism of Lenin and woodrow Wilson in terms Essay”, n.d.)
Retrieved from https://studentshare.org/history/1587937-compare-and-contrast-the-idealism-of-lenin-and-woodrow-wilson-in-terms-of-how-they-conceived-and-tried-to-implement-a-better-world

(Compare and Contrast the Idealism of Lenin and Woodrow Wilson in Terms Essay)
https://studentshare.org/history/1587937-compare-and-contrast-the-idealism-of-lenin-and-woodrow-wilson-in-terms-of-how-they-conceived-and-tried-to-implement-a-better-world.

...?Woodrow Wilson and World War Introduction Woodrow Wilson was the 28th President of the United Sates of America. As a Democratic Party candi he was elected to power in 1913. He served as the president for two terms until 1921.1 He was the only President with a PhD degree. 2 He had no belief in the Presidential form of government in the earlier years of his political career. He considered that the checks and balances in the U.S. Constitution did not provide for accountability on any arm of the federal structure. He rather advocated Parliamentary form of government. However in the later years he gained confidence in the Presidential system...
6 Pages(1500 words)Research Paper

...? of the of the Wilson and Lenin The end of World War I created the need for global reforms that could guarantee peace and harmony. Woodrow Wilson from US and Vladimir Lenin from Russia had the greatest influence in the post World-War era. Both leaders had certain similarities in their aims but possessed different ideologies to accomplish it. After the world war, the world saw two great leaders trying to develop international peace. Wilson and Lenin however were very different in their ideologies. As opposed to Wilson who advocated...
1 Pages(250 words)Essay

...WOODROW WILSON Thomas Woodrow Wilson (1856-1924), the 28th President of the United s, has been continuously ranked in top ten of the greatest US Presidents as one of the most influential and leading intellectuals of his era (Hines, 2008). From the critical perspective, historians have analyzed Woodrow Wilson's policy, and the basis for his political decisions for more then eight decades. Although he had an almost exclusively domestic focus at the beginning of his presidency, Wilson guided the United States through one of only two wars termed "World" in its scope. His diplomatic actions...
3 Pages(750 words)Essay

Effect of Gambling to British Teenagers

...Woodrow Wilson There were a number of factors that contributed to America declaring war on Germany. While Woodrow Wilson had been reelected using the campaign slogan ‘I kept us out of the war,’ it’s clear that even during this period there were a number of instances occurring that would later lead to United States involvement. Despite declaring neutrality, Germany had increasingly engaged United States passenger ships and ships delivering supplies to Europe. In 1915, German submarines sank the RMS Lusitania, a United States passenger ship, without warning. This created substantial public unrest and shifted public opinion towards entering the war. While this ship is...
2 Pages(500 words)Essay

...Insert Introduction There are many reasons as to why as a Congressman, I voted in support of President Woodrow Wilson’sdeclaration of war in April 1917. Given the consciousness I possessed on the ravages of war, the reasons I considered to cast my vote in favor of America’s involvement in World War I were thus serious, as shall be seen in the discussion that ensues forthwith. Thesis statement America by all means had been compelled out of World War I by its policy of Neutrality and Non-Interference until Germany made an affront on her sovereignty and interests. One, I agreed fully with my fellow Congressmen on the need for America to continue practicing its policy of Neutrality...
2 Pages(500 words)Essay

Compare and contrast Wilson and Truman

...President Wilson and Truman Ways of Dealing with Military Leaders Thomas Woodrow Wilson served as America’s 28th president between 1913 and 1921 (Keylor 98). He is remembered as a leader who was racist in his policies and thoughts. This is because his administration racially segregated both federal employees and members of the military, especially the Navy. On the other hand, Harry S. Truman served as the 33rd president between 1945 and 1953. He succeeded Roosevelt, following his death in 1945. During his leadership, the United States managed to successfully end the First World War. This paper provides an insightful analysis of Wilson and Truman’s ways...
2 Pages(500 words)Essay

...Woodrow Wilson & World War I What were the main causes that led to the eruption of World War I? There were three main causes which were the assassination of Archduke Ferdinand of Austria by a Serbian, an increase and rise in nationalism as well as continual building up of the alliances and militarism within the European countries. What role did the balance of power play in the triggering of that conflict and how did the American government initially respond to the wars outbreak in August 1914? The alliance of Britain, France and Russia had more military strength from the many soldiers in the army. They also had high military spending budgets to utilize...
1 Pages(250 words)Essay
sponsored ads
Save Your Time for More Important Things
Let us write or edit the essay on your topic "Compare and contrast the idealism of Lenin and woodrow Wilson in terms of how they conceived and tried to implement a better world" with a personal 20% discount.
GRAB THE BEST PAPER

Let us find you another Essay on topic Compare and contrast the idealism of Lenin and woodrow Wilson in terms of how they conceived and tried to implement a better world for FREE!