Comments (0)
Add to wishlistDelete from wishlist
Cite this document
Summary
There were three main causes which were the assassination of Archduke Ferdinand of Austria by a Serbian, an increase and rise in nationalism as well as continual building up of the alliances and militarism within the European countries.
The alliance of Britain, France and…
Download full paperFile format: .doc, available for editing
HIDE THIS PAPERGRAB THE BEST PAPER96.6% of users find it useful 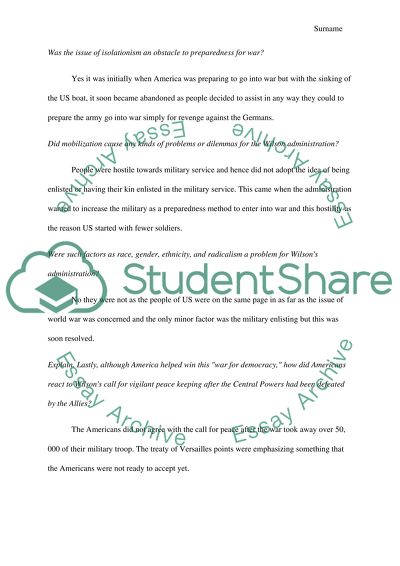 Woodrow Wilson & World War I What were the main causes that led to the eruption of World War I?
There were three main causes which were the assassination of Archduke Ferdinand of Austria by a Serbian, an increase and rise in nationalism as well as continual building up of the alliances and militarism within the European countries.
What role did the balance of power play in the triggering of that conflict and how did the American government initially respond to the wars outbreak in August 1914?
The alliance of Britain, France and Russia had more military strength from the many soldiers in the army. They also had high military spending budgets to utilize as well as using more powerful guns and naval support compared to the alliance of Germany, Austria and Italy. The US through President Woodrow Wilson declared neutrality in the war.
When we finally decided to enter the engagement in early 1917, were we ready for going to war?
Yes the US was ready by 1917 dues to the mobilization of the military to be increased by enlisting men from the age of 18 years, getting money from businessmen to finance the war and even getting naval support. The strength however was not as great as it was by the time the war was ending.
Was the issue of isolationism an obstacle to preparedness for war?
Yes it was initially when America was preparing to go into war but with the sinking of the US boat, it soon became abandoned as people decided to assist in any way they could to prepare the army go into war simply for revenge against the Germans.
Did mobilization cause any kinds of problems or dilemmas for the Wilson administration?
People were hostile towards military service and hence did not adopt the idea of being enlisted or having their kin enlisted in the military service. This came when the administration wanted to increase the military as a preparedness method to enter into war and this hostility as the reason US started with fewer soldiers.
Were such factors as race, gender, ethnicity, and radicalism a problem for Wilsons administration?
No they were not as the people of US were on the same page in as far as the issue of world war was concerned and the only minor factor was the military enlisting but this was soon resolved.
Explain. Lastly, although America helped win this "war for democracy," how did Americans react to Wilsons call for vigilant peace keeping after the Central Powers had been defeated by the Allies?
The Americans did not agree with the call for peace after the war took away over 50, 000 of their military troop. The treaty of Versailles points were emphasizing something that the Americans were not ready to accept yet. Read More
Share:
Tags
Cite this document
(“Woodrow Wilson & World War I Essay Example | Topics and Well Written Essays - 250 words”, n.d.)
Woodrow Wilson & World War I Essay Example | Topics and Well Written Essays - 250 words. Retrieved from https://studentshare.org/history/1647952-woodrow-wilson-world-war-i

CHECK THESE SAMPLES OF Woodrow Wilson & World War I

...journeys and captivating speeches he had made in his pursuit of peace. It is noteworthy that the U.S. never became of a member of the League of Nations which was quite ironical. Bibliography David M Esposito, The Legacy of Woodrow Wilson: American War Aims in World War I. (Westport, CT,: Praeger.1996) 3 Henig, Ruth, The Origins of the First World War, (London: Routledge; 2002) 1 James W. Ceaser Presidential Selection: Theory and Development (New Jersey, Princeton University Press, 1979) President Wilson’s Fourteen Points, 1918 Documents, World War 1...
6 Pages(1500 words)Research Paper

... of the of the Concerned History and Political Science 17 December World War I and World War II The two World Wars were events that included within their ambit a great number of the most populated and influential nations of the world. The battles affiliated to these two wars were fought in varied theaters spread across many countries and almost all the continents. The World War I and the World War II led to massive causalities, bloodshed and destruction in almost all the theatres in which they were fought. The number of people killed and wounded in these two wars amounted to millions. It also needs to be mentioned that in the two Wars the people who suffered were not merely soldiers but also included civilians, old people, women... and...
5 Pages(1250 words)Essay

...WOODROW WILSON Thomas Woodrow Wilson (1856-1924), the 28th President of the United s, has been continuously ranked in top ten of the greatest US Presidents as one of the most influential and leading intellectuals of his era (Hines, 2008). From the critical perspective, historians have analyzed Woodrow Wilson's policy, and the basis for his political decisions for more then eight decades. Although he had an almost exclusively domestic focus at the beginning of his presidency, Wilson guided the United States through one of only two wars termed "World" in its scope. His diplomatic actions...
3 Pages(750 words)Essay

...1 man per foot.) On the Eastern Front., there were not enough soldiers to hold a solid line in force. The war there was more characterized by scattered outposts, flanking maneuvers, and large advances and retreats, and even by the use of cavalry, which proved all but worthless in the west. We hear more about the Western front for several reasons. For one thing, it is where all British, French, Italian, and American forces fought, as well as the majority of German forces. At the start of World War I, most armies prepared for a brief war whose strategy and tactics would have been familiar to Napoleon. Indeed, a number of horse cavalry units were brought...
6 Pages(1500 words)Book Report/Review

...Woodrow Wilson There were a number of factors that contributed to America declaring war on Germany. While Woodrow Wilson had been reelected using the campaign slogan ‘I kept us out of the war,’ it’s clear that even during this period there were a number of instances occurring that would later lead to United States involvement. Despite declaring neutrality, Germany had increasingly engaged United States passenger ships and ships delivering supplies to Europe. In 1915, German submarines sank the RMS Lusitania, a United States passenger ship, without warning. This created substantial public unrest and shifted public opinion...
2 Pages(500 words)Essay

... and Sedition Acts together with not signing the League of Nations completely cut the ties the United States had with World War I and II and it concentrated on building its country. Work Cited Clark, Sarah. World War I. California: Teacher Created Resources, 1997. Donalson, Daniel. The Espionage and Sedition Acts of World War I: Using Wartime Loyalty Laws for Revenge and Profit. Texas: Lfb Scholarly Pub Llc, 2012. Hogan, Michael. Woodrow Wilsons Western Tour: Rhetoric, Public Opinion, and the League of Nations. Texas: Texas A7M University Press.... World War I Introduction The First World War took place between 1914 and 1918 and it was foughtmostly in the...
4 Pages(1000 words)Essay

...Insert Introduction There are many reasons as to why as a Congressman, I voted in support of President Woodrow Wilson’sdeclaration of war in April 1917. Given the consciousness I possessed on the ravages of war, the reasons I considered to cast my vote in favor of America’s involvement in World War I were thus serious, as shall be seen in the discussion that ensues forthwith. Thesis statement America by all means had been compelled out of World War I by its policy of Neutrality and Non-Interference until Germany made an affront on...
2 Pages(500 words)Essay
sponsored ads
Save Your Time for More Important Things
Let us write or edit the essay on your topic "Woodrow Wilson & World War I" with a personal 20% discount.
GRAB THE BEST PAPER

Let us find you another Essay on topic Woodrow Wilson & World War I for FREE!