Compare and contrast the early British settlements in the Chesapeake and New England Areas. What were the different characteristics of the populations How were the motivations to come to the New World different What were the economic differences (one-cr - Essay Example 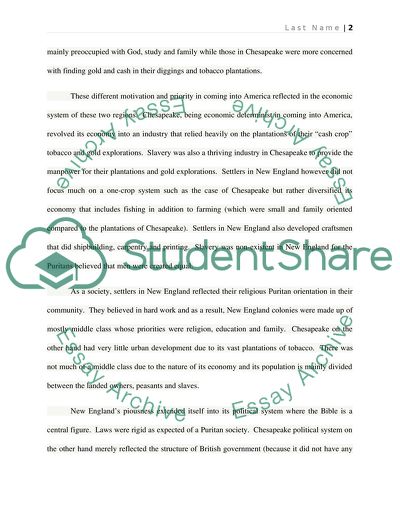 Extract of sample "Compare and contrast the early British settlements in the Chesapeake and New England Areas. What were the different characteristics of the populations How were the motivations to come to the New World different What were the economic differences (one-cr"

Compare and contrast the early British settlements in the Chesapeake and New England areas In between 16th and 17th century, immigrants from England settled into the eastern coast of the colonized New World which was then known as America. These groups settled into two regions which were the Chesapeake and New England areas. Chesapeake included Virginia, Maryland, New Jerseys (East and West), Pennsylvania and Jamestown while New England composed of included Massachusetts Bay Colony, Plymouth, Rhode Island, Connecticut, and New Haven. While these immigrants came from the same country and spoke the same tongue, they proved to become different kind of people when they settled into these regions of America.
Settlers in Chesapeake came into America mainly for economic reason while immigrants in the New England settled in America to escape the religious persecution back in England. Those who went to Chesapeake were into finding riches while those who settled in New England hoped to have religious freedom which they did not have back in England. Having different reason and motivation for coming into the New World, these new settlers became different people when they came to America albeit they came from country. As a people, settlers in New England continued their pious tendency of making religion central to their lives. Their lives are mainly preoccupied with God, study and family while those in Chesapeake were more concerned with finding gold and cash in their diggings and tobacco plantations.
These different motivation and priority in coming into America reflected in the economic system of these two regions. Chesapeake, being economic determinist in coming into America, revolved its economy into an industry that relied heavily on the plantations of their “cash crop” tobacco and gold explorations. Slavery was also a thriving industry in Chesapeake to provide the manpower for their plantations and gold explorations. Settlers in New England however did not focus much on a one-crop system such as the case of Chesapeake but rather diversified its economy that includes fishing in addition to farming (which were small and family oriented compared to the plantations of Chesapeake). Settlers in New England also developed craftsmen that did shipbuilding, carpentry and printing. Slavery was non-existent in New England for the Puritans believed that men were created equal.
As a society, settlers in New England reflected their religious Puritan orientation in their community. They believed in hard work and as a result, New England colonies were made up of mostly middle class whose priorities were religion, education and family. Chesapeake on the other hand had very little urban development due to its vast plantations of tobacco. There was not much of a middle class due to the nature of its economy and its population is mainly divided between the landed owners, peasants and slaves.
New England’s piousness extended itself into its political system where the Bible is a central figure. Laws were rigid as expected of a Puritan society. Chesapeake political system on the other hand merely reflected the structure of British government (because it did not have any religious resentment with the crown as with the settlers in New England) whose governor was appointed by the Crown whose Council Members were composed of wealthy landowners. Read More
Share:
Tags
Cite this document
(“Compare and contrast the early British settlements in the Chesapeake Essay”, n.d.)
Compare and contrast the early British settlements in the Chesapeake Essay. Retrieved from https://studentshare.org/history/1587704-compare-and-contrast-the-early-british-settlements-in-the-chesapeake-and-new-england-areas-what-were-the-different-characteristics-of-the-populations-how-were-the-motivations-to-come-to-the-new-world-different-what-were-the-economic-differences-one-cr

“Compare and Contrast the Early British Settlements in the Chesapeake Essay”, n.d. https://studentshare.org/history/1587704-compare-and-contrast-the-early-british-settlements-in-the-chesapeake-and-new-england-areas-what-were-the-different-characteristics-of-the-populations-how-were-the-motivations-to-come-to-the-new-world-different-what-were-the-economic-differences-one-cr.
Comments (0)
Click to create a comment or rate a document

CHECK THESE SAMPLES OF Compare and contrast the early British settlements in the Chesapeake and New England Areas. What were the different characteristics of the populations How were the motivations to come to the New World different What were the economic differences (one-cr

The expectations of English colonists in Chesapeake and New England

...The Expectations of English Colonists in Chesapeake and New England Captain John Smith had infact challenged the rationale of the English attempt to Christianize, civilize, and educate Native American Indians. This fact attests to the possibility that the people of Chesapeake and New England in the 16th and 17th centuries were not as the English colonists initially expected: uncivilized, uneducated, and irreverent. Immediately after entering in 1607 the muddy outposts the English colonists referred to as Jamestown, Smith observed the inappropriateness of the orders given by the pioneers of the colony with the pressures...
4 Pages(1000 words)Essay

...England Colonies, the latter has a greater number of populations probably because they constitute more land area than the other or active economic ventures of the place. New England colonies include Maine, New Hampshire, Vermont, Massachusetts, Rhode Islands, and Connecticut. New England colonies were more improved compared to the Chesapeake region. They make use of land and aquatic agriculture and sell its products to other people. In the farming area however, they are not as blessed as Chesapeake of...
6 Pages(1500 words)Term Paper

...transportation and preferential ploughing conditions. Growth of towns in this area was slow since most affluent farmers preferred building their own wharves for produce shipment to England. Besides, workers were sought from England who were to benefit from the headright system. The indentured servants had to be given land of their own which meant that the plantation owner should have had vast tracts of land. The protracted economic depression of 1660 to early 1700s was brought about by changing tobacco prices which led to annihilation of local Indian population by the disenchanted colonists....
5 Pages(1250 words)Essay

...been suggested including waterfall, Agile, Iterative model, prototype model, spiral model etc., each with its different strengths and weaknesses (Thayer, 2005). Moreover, differences exist the way software is developed in theory and in practice. Considering these factors, for a software development organization to make an informed decision on the most appropriate life-cycle model for the particular, organization, the staff and the software process, it is imperative to make a comparative analysis of various life-cycle models (Schach, 2011). This paper therefore, strives to compare and contrast the features and defects of waterfall, Agile, Iterative model,...
6 Pages(1500 words)Research Paper

..., Chesapeake Bay region. However, the Spanish model did not succeed as expected as the British had misconceived ideas about the nature and political system of the Indian Americans. In 1603, King James 1 of England, jealous of the Spanish success in the new world, sought to establish his own colonies in sprawling areas of North America that were untapped. The king issued the Virginia Company a charter, empowering it to own in excess of six million acres of land in North America, and this was how the British established its colony, where the King hoped the empire would benefit...
3 Pages(750 words)Essay

11 Pages(2750 words)Term Paper
sponsored ads
Save Your Time for More Important Things
Let us write or edit the essay on your topic "Compare and contrast the early British settlements in the Chesapeake and New England Areas. What were the different characteristics of the populations How were the motivations to come to the New World different What were the economic differences (one-cr" with a personal 20% discount.
GRAB THE BEST PAPER

Let us find you another Essay on topic Compare and contrast the early British settlements in the Chesapeake and New England Areas. What were the different characteristics of the populations How were the motivations to come to the New World different What were the economic differences (one-cr for FREE!