Comments (0)
Add to wishlistDelete from wishlist
Cite this document
Summary
In the paper “American Revolution and Early British Colonies” the author analyzes the ideological movement for America after one of the most important events in the history of world - American Revolution, as with it begun a new era of prosperity and opportunity…
Download full paperFile format: .doc, available for editing
HIDE THIS PAPERGRAB THE BEST PAPER92.2% of users find it useful 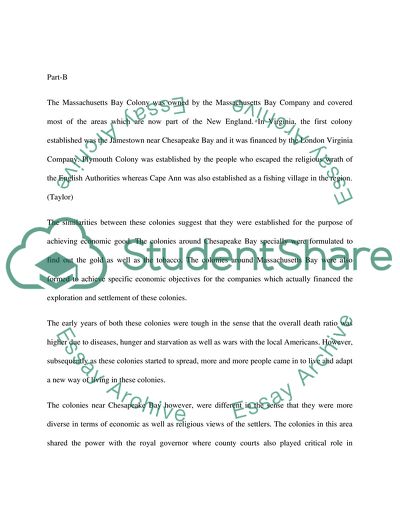 ﻿American Revolution and Early British Colonies
Part-A
American Revolution is considered as one of the most important events in the history of world as with it begun a new era of prosperity and opportunity. Much before the physical struggle for revolution begun, it had already started as many intellectuals and leaders of that era started to contribute through their writings.
The ideological movement for America and what is called American enlightenment rests on the writings of John Locke. Chief among them were the ideas of liberty, religious tolerance, democracy and republicanism. (John Adams and Wood). There were three most important Patriots whose writings greatly influenced and shaped the way United States is currently formulated. Thomas Paine, Thomas Jefferson as well as Alex Hamilton who were great advocates of the republicanism and advocated the formation of a united country based on different British Colonies. Patriots were the people who actually declared independence of thirteen British Colonies to form what is now called United States of America.
The writings of Samuel Adams specially his circular letter resulted into the famous Boston Massacre. His writings are considered as one of the key efforts towards the development of an environment which led to the revolution.
Thomas Paine’s Common Sense is also considered as one of the most important contribution towards the events leading to the revolution. In this book, Paine extensively advocated the separation of America from United Kingdom. His series of writings with the name of The American Crisis is also considered as important contribution towards the actual revolution which however, materialized after some period of time.
Part-B
The Massachusetts Bay Colony was owned by the Massachusetts Bay Company and covered most of the areas which are now part of the New England. In Virginia, the first colony established was the Jamestown near Chesapeake Bay and it was financed by the London Virginia Company. Plymouth Colony was established by the people who escaped the religious wrath of the English Authorities whereas Cape Ann was also established as a fishing village in the region. (Taylor)
The similarities between these colonies suggest that they were established for the purpose of achieving economic good. The colonies around Chesapeake Bay specially were formulated to find out the gold as well as the tobacco. The colonies around Massachusetts Bay were also formed to achieve specific economic objectives for the companies which actually financed the exploration and settlement of these colonies.
The early years of both these colonies were tough in the sense that the overall death ratio was higher due to diseases, hunger and starvation as well as wars with the local Americans. However, subsequently as these colonies started to spread, more and more people came in to live and adapt a new way of living in these colonies.
The colonies near Chesapeake Bay however, were different in the sense that they were more diverse in terms of economic as well as religious views of the settlers. The colonies in this area shared the power with the royal governor where county courts also played critical role in governing. The colonies in Massachusetts area were however, directly governed and ruled by the company men from England through a Royal Charter.
Bibliography
John Adams and Gordon Wood. John Adams:Revolutionary Writings, 1775-1783. Washington: Library of America, 2011.
Taylor, Alan. American colonies. New York: Penguin Books, 2002. Read More
Share:
Tags
Cite this document
(“American Revolution and Early British Colonies Essay”, n.d.)
Retrieved from https://studentshare.org/history/1580927-american-revolution-and-early-british-colonies

CHECK THESE SAMPLES OF American Revolution and Early British Colonies

...?American Revolution number The development of contradicting opinions against the British Colonialists as dictated in the ancient colonialism was mainly based on the model of treatment accorded to by various individuals by the colonial masters. Some continents were filled with a diverse population of citizens who played as inhabitant of the region. The entry of the British colonialists paved way for the commencement of a series of colonies, a development that saw the introduction of categorization of people. Distinctive features were used to identify with the various categories of individuals, with each of the individuals...
10 Pages(2500 words)Essay

History of Native Education in the British North American Colonies

...,” remarked Vallery, (as cited in Atleo, 1991). It was start of the bad experience for the native education, which could not be lessened in any way emerging from the early native education policy statement. The current education policy is totally opposite to the one pursued by the British education in North American colonies. It was taken for granted that the Native student was lacking in all aspects of education such as language, art, habits, mental acumen worth inculcating. All their community traits, gathered wisdom of centuries, their traditions were considered void until the Native student proved worthy to be ‘born again’ European. This colonial...
12 Pages(3000 words)Essay

History of black education in the british north american colonies

...Revolution. New York: Knopf, 1939-1970. Essay 2 Fundamental change with regard to the colonists, slaves, Native Americans and women after American Revolution. . The American Revolution brought a series of changes in colonial rule and had a drastic impact not only political but also on all sections of the society including colonists, slaves, Native Americans and women. Immediate change was visible in the economic setup as there was change on domestic and foreign currency. Colonists were urged to form their own government yet there was a challenge in implementation of the same as the...
6 Pages(1500 words)Essay

...as the dominant colonial power. These colonies in the East and West Indies, and North America, served as an overseas market for England’s domestic goods, and also provided raw material and manufactured goods. The powerful British naval fleet guarded mercantile access to these markets. At the same time, England’s Scientific Revolution resulted in several inventions, such as the spinning jenny and the steam engine, which lowered production costs and market prices, and increased speed. A rapid growth in population and rising standards of living increased mass consumption and stimulated demand. This population growth also provided England with a large labor force. While...
2 Pages(500 words)Essay

...American Revolution Introduction America was a British colony before 1776 when they gained independence. The British displaced the original residents of America which they previously called newfound land who were the Red Indians and occupied the area changing the culture to represent that of Europe. The Period between 1763 and 1783 saw the Americans fight the British soldiers in a bid to seek their independence in what was termed as the American Revolution (Frank 65). The paper will explore in detail and using examples the basic cause and nature of the American...
2 Pages(500 words)Essay

...American Revolution The Stamp Act (1765), Townshend Tariffs (1767) and Tea Act (1773) were among the major contributing factors to the American Revolution (Foner 15). The British Authorities used the prior mentioned Acts to collect more revenue from the American colonists than what had been set. Majority of the colonists blamed little representation in Parliament as a causative agent to mistreatment. Even though the revolution was justifiable, was it really necessary? Did the war alter any cultural or religious orientation? The revolution was not inevitable because most Americans were...
1 Pages(250 words)Essay

...Industrial Revolution in Britain There is no single reason as to why the industrial revolution first started in Britain, but rather a perfect coalescence of individual parts that led to Britain’s successful industrial revolution. Diverging reasons have been given to explain the dominance of England in this front. Key among these reasons is the belief that the British were just fortunate people who happened to be at the right place at the right time. However, the people could have opted not to work. Nature had given the Britons more to work with than people in other places and so the task advanced more quickly (Morris, 2010). This argument forms the basis of my thesis...
2 Pages(500 words)Essay
sponsored ads
Save Your Time for More Important Things
Let us write or edit the essay on your topic "American Revolution and Early British Colonies" with a personal 20% discount.
GRAB THE BEST PAPER

Let us find you another Essay on topic American Revolution and Early British Colonies for FREE!