Comments (0)
Add to wishlistDelete from wishlist
Cite this document
Summary
United Nations is an international organization of independent and sovereign countries whose purpose is to gather together all the nations in the world under the principles of justice and, human dignity and peace. United Nations aims for global peace, human development and…
Download full paperFile format: .doc, available for editing
HIDE THIS PAPERGRAB THE BEST PAPER94.1% of users find it useful 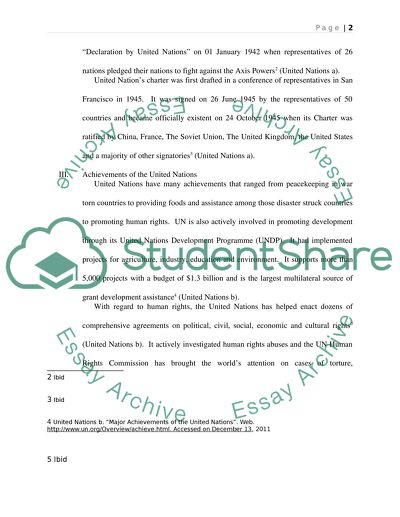 Download file to see previous pages eived during the First World War “to promote international cooperation and to achieve peace and security” under the Treaty of Versailles1 (United Nations a).
The name itself, United Nations became formally known during the Second World War when US President Franklin Delano Roosevelt used the term in the “Declaration by United Nations” on 01 January 1942 when representatives of 26 nations pledged their nations to fight against the Axis Powers2 (United Nations a).
United Nation’s charter was first drafted in a conference of representatives in San Francisco in 1945. It was signed on 26 June 1945 by the representatives of 50 countries and became officially existent on 24 October 1945 when its Charter was ratified by China, France, The Soviet Union, The United Kingdom, the United States and a majority of other signatories3 (United Nations a).
United Nations have many achievements that ranged from peacekeeping in war torn countries to providing foods and assistance among those disaster struck countries to promoting human rights. UN is also actively involved in promoting development through its United Nations Development Programme (UNDP). It had implemented projects for agriculture, industry, education and environment. It supports more than 5,000 projects with a budget of $1.3 billion and is the largest multilateral source of grant development assistance4 (United Nations b).
With regard to human rights, the United Nations has helped enact dozens of comprehensive agreements on political, civil, social, economic and cultural rights5 (United Nations b). It actively investigated human rights abuses and the UN Human Rights Commission has brought the world’s attention on cases of torture, disappearance and arbitrary detention. It also helped generate international pressure on governments to improve their human rights records6 (United Nations b).
The United Nations has already achieved a lot in terms of promoting peace, human rights, progress, justice and ...Download file to see next pagesRead More
Share:
Tags
Cite this document
(“Human rights Term Paper Example | Topics and Well Written Essays - 1750 words”, n.d.)
Retrieved from https://studentshare.org/history/1586623-human-rights

CHECK THESE SAMPLES OF Human rights

...of the attacks (Syria chemical attack, 2013). Samples obtained from the attacked areas by the Organization for the Prohibition of the Chemical Weapons, confirm the presence of sarin, a nerve agent, found in a majority of rockets used in the attacks. These findings are consistent with the organophosphate intoxication found in the blood and urine samples of those who survived the attacks. Reports from the Human Rights Watch have found no evidence for the use of huge quantities of chemicals and possession of rockets by the opposition forces (Syria chemical attack, 2013). However, despite several concrete reports on the role of Syrian government in the attacks, the regimen has denied any role in the attacks...
2 Pages(500 words)Research Paper
sponsored ads
Save Your Time for More Important Things
Let us write or edit the term paper on your topic "Human rights" with a personal 20% discount.
GRAB THE BEST PAPER

Let us find you another Term Paper on topic Human rights for FREE!