Comments (0)
Add to wishlistDelete from wishlist
Cite this document
Summary
The rules of engagement (ROE) for limited warfare during the Vietnam held different implications for different levels of stakeholders in the conduct of the war, from the President as Commander in Chief down to the foot solider in the field of battle. …
Download full paperFile format: .doc, available for editing
HIDE THIS PAPERGRAB THE BEST PAPER97.3% of users find it useful 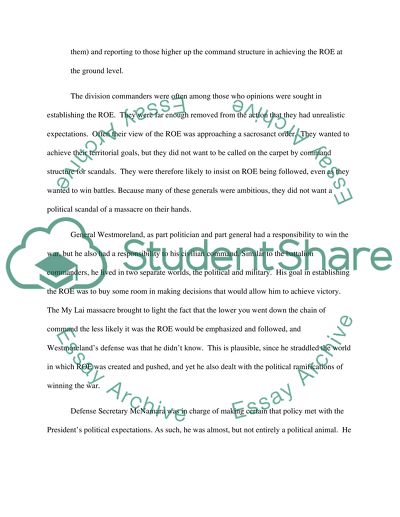 The rules of engagement (ROE) for limited warfare during the Vietnam held different implications for different levels of stakeholders in the conduct of the war, from the President as Commander in Chief down to the foot solider in the field of battle. In this brief essay, some of these major implications for major stakeholders will be summarized. The materials for these summaries were taken from reading Lewy (1978) and The Weider History Group (2006)
For the individual soldier in the field, the ROE were often either unknown or unacknowledged. While the soldiers were aware of the general nature of the American involvement in Vietnam and understood that they needed to avoid unnecessary violence, if only to avoid making enemies with the local population, their motivations were often driven by instinct, common sense, and camaraderie rather than manuals dictating standard operating procedures. Despite the training they received before arriving in country, the soldiers often found themselves among their peers once they were readying to go to battle, and a kind experiential group ethic took the place of top-down orders. In the heat of battle they largely did what they had to in order to survive, often living out their own emotional worries and fears.
For the battalion commanders, there was a combination of personal involvement with the soldiers and a higher-level responsibility to the command structure to achieve the ROE. They realized that there were realities that played out in the individual soldiers’ lives that impacted upon their ability to remember and follow orders, and therefore they often attempted to lead by example and crack the whip when necessary. They were responsible to know the ROE and implement, even as they changed continually. They walked a fine line between associating with their men (thereby living in the moment with them) and reporting to those higher up the command structure in achieving the ROE at the ground level.
The division commanders were often among those who opinions were sought in establishing the ROE. They were far enough removed from the action that they had unrealistic expectations. Often their view of the ROE was approaching a sacrosanct order. They wanted to achieve their territorial goals, but they did not want to be called on the carpet by command structure for scandals. They were therefore likely to insist on ROE being followed, even as they wanted to win battles. Because many of these generals were ambitious, they did not want a political scandal of a massacre on their hands.
General Westmoreland, as part politician and part general had a responsibility to win the war, but he also had a responsibility to his civilian command. Similar to the battalion commanders, he lived in two separate worlds, the political and military. His goal in establishing the ROE was to buy some room in making decisions that would allow him to achieve victory. The My Lai massacre brought to light the fact that the lower you went down the chain of command the less likely it was the ROE would be emphasized and followed, and Westmoreland’s defense was that he didn’t know. This is plausible, since he straddled the world in which ROE was created and pushed, and yet he also dealt with the political ramifications of winning the war.
Defense Secretary McNamara was in charge of making certain that policy met with the President’s political expectations. As such, he was almost, but not entirely a political animal. He also seemed to be a true believer in the war, at the time, and therefore his attempt to establish the ROE was designed to promote victory while maintaining accountability.
President Johnson’s role in establishing and promoting the ROE and limiting the war was obviously political. He rushed to take credit for victories and deflect blame. He boasted that the soldiers couldn’t hit an outhouse without his permission, and he took an active role in planning. But in the end, the ROE was a political tool for him. He was concerned mainly with conducting the war so that the American people approved.
References
Lewy, G. 1978. America in Vietnam. (Oxford: Oxford University Press).
Weider History Group. 2006. “Air Force Colonel Jacksel Jack Broughton & Air Force General John D. Jack Lavelle: Testing the Rules of Engagement During the Vietnam War” Retrieved from http://www.historynet.com/air-force-colonel-jacksel-jack-broughton-air-force-general-john-d-jack-lavelle-testing-the-rules-of-engagement-during-the-vietnam-war.htm Read More
Share:
Tags
Cite this document
(“Vietnam War Essay Example | Topics and Well Written Essays - 500 words - 2”, n.d.)
Vietnam War Essay Example | Topics and Well Written Essays - 500 words - 2. Retrieved from https://studentshare.org/history/1584604-vietnam-war

CHECK THESE SAMPLES OF Vietnam War

...The Vietnam War that was fought between the American backed South Vietnam and the Communist North Vietnam lasted for over two decades. Before the Second World War, Vietnam, Laos, and Cambodia, together known as French Indochina, were a French colony. However, the French too were waging a war against the local people, who wanted to be rid of the colonial yoke. Soon after the world war, the fighting for the colony by the French continued, but by the year 1954, after their defeat at Dien Bien Phu, they were forced to agree to the Geneva accords, whereby Vietnam was divided at the...
6 Pages(1500 words)Essay

... The Vietnam War U.S. involvement in Vietnam proves that there are limits to the capabilities of any military, even the largest and most sophisticated in the history of the world. Understanding this reality is, or should be, a vital facet of foreign policy. The current conflicts in Afghanistan and Iraq shows that if the costly lesson learned from Vietnam is not appreciated the U.S. will continue its foreign relations debacles which will further weaken its armed services, economic stability and political influence within the community of nations. The former imperialistic Roman Empire should serve as an example of how this cause and effect scenario plays out. A similar destiny awaits America if it refuses to stop repeating... the...
8 Pages(2000 words)Term Paper

...THE VIETNAM WAR INTRODUCTION The dynamics of the Vietnam War make it one of the most complex wars ever fought by the United s. Every element of the war was saturated with complexities beyond the previous conceptions of war. From the critical perspective, for the first half of the twentieth century, Vietnam was of little strategic importance to the United States and, even "after World War II, Vietnam was a very small blip on a very large American radar screen" (Herring, 14). The U.S. knew very little about Vietnam outside of its rice production until the...
8 Pages(2000 words)Essay

... Vietnam War Introduction The United s of America for the first time from 1964 to 1972 made an all-out military effort in the fight as it took sides in the conflict in Vietnam. With all the technological and human capabilities, America was favored to win that war. The Government of America was very determined to end that war in the shortest possible period that never came to be. So, what really transpired in the Vietnam War? Did America emerge the “obvious winner? Many questions about the Vietnam War lay unanswered to date. This paper discusses and compares the views of different authors about the war in Vietnam. Evidently, the issue has been viewed differently as the books that will be discussed highlight. Some authors attribute... the...
4 Pages(1000 words)Essay

...THE VIETNAM WAR (Root cause and its result) ID Number: of and number: of School (University) Word Count: 314 (text only) Date of Submission: July 24, 2014 The Vietnam War (1959-1975) was a prolonged or protracted conflict between the two parts of Vietnam – which are North Vietnam as communist and South Vietnam as democratic. Its root cause was the on-going and intensified Cold War between the two opposing superpowers at the time which were the United States of America (USA) as a champion for democracy and the Union of Soviet Socialist Republics (USSR) as the leader of the communist bloc in the...
1 Pages(250 words)Essay
sponsored ads
Save Your Time for More Important Things
Let us write or edit the essay on your topic "Vietnam War" with a personal 20% discount.
GRAB THE BEST PAPER

Let us find you another Essay on topic Vietnam War for FREE!