Comments (0)
Add to wishlistDelete from wishlist
Cite this document
Summary
Even as some people were still asleep in their beds, a myriad of fighter planes, bombers, and torpedo ships came out of nowhere to launch a terrifying assault. Perhaps one of the greatest questions of…
Download full paperFile format: .doc, available for editing
HIDE THIS PAPERGRAB THE BEST PAPER98.1% of users find it useful 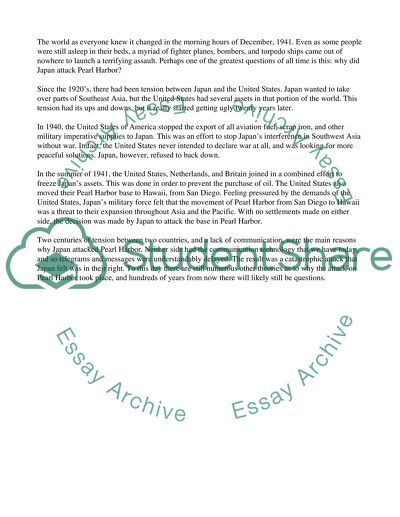 The world as everyone knew it changed in the morning hours of December, 1941. Even as some people were still asleep in their beds, a myriad of fighter planes, bombers, and torpedo ships came out of nowhere to launch a terrifying assault. Perhaps one of the greatest questions of all time is this: why did Japan attack Pearl Harbor?
Since the 1920’s, there had been tension between Japan and the United States. Japan wanted to take over parts of Southeast Asia, but the United States had several assets in that portion of the world. This tension had its ups and downs, but it really started getting ugly twenty years later.
In 1940, the United States of America stopped the export of all aviation fuel, scrap iron, and other military imperative supplies to Japan. This was an effort to stop Japan’s interference in Southwest Asia without war. In fact, the United States never intended to declare war at all, and was looking for more peaceful solutions. Japan, however, refused to back down.
In the summer of 1941, the United States, Netherlands, and Britain joined in a combined effort to freeze Japan’s assets. This was done in order to prevent the purchase of oil. The United States also moved their Pearl Harbor base to Hawaii, from San Diego. Feeling pressured by the demands of the United States, Japan’s military force felt that the movement of Pearl Harbor from San Diego to Hawaii was a threat to their expansion throughout Asia and the Pacific. With no settlements made on either side, the decision was made by Japan to attack the base in Pearl Harbor.
Two centuries of tension between two countries, and a lack of communication, were the main reasons why Japan attacked Pearl Harbor. Neither side had the communication technology that we have today, and so telegrams and messages were understandably delayed. The result was a catastrophic attack that Japan felt was in their right. To this day there are still numerous other theories as to why the attack on Pearl Harbor took place, and hundreds of years from now there will likely still be questions. Read More
Share:
Tags
Cite this document
(“Pearl harbor Essay Example | Topics and Well Written Essays - 250 words”, n.d.)
Retrieved from https://studentshare.org/history/1584211-pearl-harbor

CHECK THESE SAMPLES OF Pearl harbor

...PEARL HARBOR In facts, Pearl Harbor was initially a widespread shallow embayment referred to as Wai Momi signifying Pearl Water. It is a mere section of O’ahu Hawai’i Island, in which much of the harbor is surrounded by deep water. It is documented that, the attack on Pearl Harbor on December 7, 1941, brought World War II into the United States (Fitzgerald 90). On December, 1941, the Japanese Military forces at Pearl Harbor assaulted the United States. This was a rude awakening of the nation particularly, being the strongest country. In the history of the United States,...
11 Pages(2750 words)Research Paper

...The Pearl Harbor Attack December 7th, 1941 was the when a Japanese force of carrier aircraft, comprising of fighters, high-degree bombers, dive bombers and torpedo bombers, initiated an attack on the American naval center at Pearl Harbor, while, at the same time, other US military installations within Hawaii. However, they obtained complete surprise with five American battleships, three cruisers, as well as three destroyers sunk while 188 US aircraft got destroyed with the majority of them being on the ground. Although Japanese losses summed up to 29 aircraft, as well as the five inadequate midget submarines intended for participating in the assault, this was a brilliant...
6 Pages(1500 words)Research Paper

The Attack On Pearl Harbor

...? The Attack On Pearl Harbor On December 7, 1941, the Japanese launched a surprise attack on Pearl Harbor. The motive behind their attack was to prevent US military interference on their plans to launch attacks on Southeast Asia. Japan’s reason to invade these regions revolved around their relentless search for natural resources, for example, rubber and oil among other things. As a result, the US navy suffered irreversible damage on some of their vessels. They had no choice but to retaliate by declaring war on Japan and overtly joining forces with the Allied forces. US went against their isolationist policies, which prevented the country from involvement in the World War II. The US did not want to suffer unavoidable consequences... as...
3 Pages(750 words)Case Study

...to pay a dear price for this movement as the US came back with a vengeance. (Conn, Engelman, and Fairchild, 2000) In the end we can say that the Japanese had planned this attack careful but it was an act of sheer foolishness though brilliantly planned. Though they achieved a part of their goal but they failed to defeat the US completely. This is why they had to pay the price dearly because they had awakened a sleeping giant. If only the Japanese did not become over confident and had stuck to their defensive strategy then they would have gone to a long drawn battle with the US and perhaps would have had the US negotiate a peace which would have left the Japanese in control but well that’s a different story. Reference Conn, S., Engelman,...
2 Pages(500 words)Essay

...Pearl Harbor Bombing Introduction On the fateful day of 7th December, 1941, the Japanese Imperial Navy launched an unexpected blitzkrieg on the Pearl Harbor, leaving American 2403 soldiers dead and 1,178 wounded. 68 civilians, too, were killed in the attack. The attack began at 7.55 AM in the morning and was over by 1.00 PM. Pearl Harbor bombing was the first attack of its magnitude after the initial years of the formation of the US. The initial reaction of the Americans to the traumatic defeat of the US hovered around anger and incredulity (Slackman, 1990). A day after the attack, the US declared war on Japan. Due to its massive impact...
7 Pages(1750 words)Essay

...Section/# The Nine Principles of Warfare: An Analysis and Discussion into the Japanese Attack on Pearl Harbor Military strategy and theory has been an art form that has developed over many thousands of years. Accordingly, many theorists and strategists have continued to be relevant whereas others have faded into obscurity as the paradigm shifts of how combat is engaged upon have morphed throughout history. For purposes of this brief research paper, this author will seek to consider the 9 Principles of Warfare that are still taught, researched, and followed by the United States Army. As a function of such an analysis of the fundamental principles of warfare, it is the hope of this author that a better...
10 Pages(2500 words)Essay

12 Pages(3000 words)Assignment
sponsored ads
Save Your Time for More Important Things
Let us write or edit the essay on your topic "Pearl harbor" with a personal 20% discount.
GRAB THE BEST PAPER

Let us find you another Essay on topic Pearl harbor for FREE!