The Israelis and the Palestinians - Essay Example

Comments (0)
Add to wishlistDelete from wishlist
Cite this document
Summary
In the essay “The Israelis and the Palestinians” the author discusses the Israeli-Palestinian conflict, which has its roots since a very long time but the main friction started towards the beginning of the 20th century when Palestine was under the rule of the British empire…
Download full paperFile format: .doc, available for editing
HIDE THIS PAPERGRAB THE BEST PAPER94.8% of users find it useful 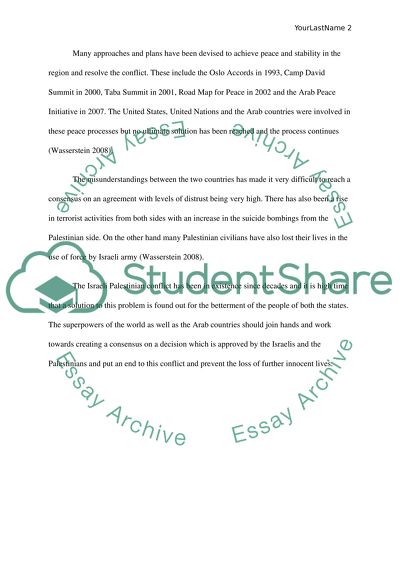 Extract of sample "The Israelis and the Palestinians"

The Israelis and the Palestinians The Israeli-Palestinian conflict has its roots since a very long time but the main friction started towards the beginning of the 20th century when Palestine was under the rule of the British empire and the immigration of Jews was allowed into its territory. This led to fighting between the Arabs and the Jews and to resolve this issue Britain laid a ban on the migration of the Jews but following the mass killings of the Jews in Germany, the resettlement of Jews in the land of Palestine was again allowed. Following this, in 1947 the United Nations provided a plan for the division of Palestine for the Jews and Arabs equally. The Arabs rejected the idea and the Jews were in favor of the plan which resulted in an armed conflict and the Jews were victorious and gained access to majority of the lands and the creation of many refugees (Wasserstein 2008).
The superpower of the world, the United States has supported the Israelis on their stand and has backed the Israelis because it considers Israel to be a strong ally in the region of the Middle East. This is because its support will assist the United States in overcoming the influence of the Soviet Union in the region and another important reason is that it will have a strong military hold in the region (Christison 2000).
Many approaches and plans have been devised to achieve peace and stability in the region and resolve the conflict. These include the Oslo Accords in 1993, Camp David Summit in 2000, Taba Summit in 2001, Road Map for Peace in 2002 and the Arab Peace Initiative in 2007. The United States, United Nations and the Arab countries were involved in these peace processes but no ultimate solution has been reached and the process continues (Wasserstein 2008).
The misunderstandings between the two countries has made it very difficult to reach a consensus on an agreement with levels of distrust being very high. There has also been a rise in terrorist activities from both sides with an increase in the suicide bombings from the Palestinian side. On the other hand many Palestinian civilians have also lost their lives in the use of force by Israeli army (Wasserstein 2008).
The Israeli Palestinian conflict has been in existence since decades and it is high time that a solution to this problem is found out for the betterment of the people of both the states. The superpowers of the world as well as the Arab countries should join hands and work towards creating a consensus on a decision which is approved by the Israelis and the Palestinians and put an end to this conflict and prevent the loss of further innocent lives.
Works Cited
Top of Form
Wasserstein, Bernard. Israelis and Palestinians: Why Do They Fight? Can They Stop?New Haven: Yale University Press, 2008. Print.
Bottom of Form
Top of Form
Top of Form
Christison, Kathleen. "Perceptions of Palestine: Their Influence on U.S. Middle East Policy." Sage Public Administration Abstracts. 27.3 (2000). Print.
Bottom of Form
Bottom of Form Read More
Share:
Tags
Cite this document
(The Israelis and the Palestinians Essay Example | Topics and Well Written Essays - 250 words - 1, n.d.)
The Israelis and the Palestinians Essay Example | Topics and Well Written Essays - 250 words - 1. Retrieved from https://studentshare.org/history/1571591-essay-the-israelis-and-the-palestinians

“The Israelis and the Palestinians Essay Example | Topics and Well Written Essays - 250 Words - 1”, n.d. https://studentshare.org/history/1571591-essay-the-israelis-and-the-palestinians.
Comments (0)
Click to create a comment or rate a document

CHECK THESE SAMPLES OF The Israelis and the Palestinians

...? The Israel ’s Influence on Israeli-Palestinian Peace Process: Fact or Myth? By and Number Location Due INTR0DUCTION The Israel , generally seen as individuals or groups of varying political influence, have long been seen as having undue influence around the world in the conduct of peace negotiations between Israel and the Palestinians—particularly in the United States, Britain and several other Western Nations. Accusations are that through the Lobby negotiations are steered in favor of Israel at the expense of realities overlooked in the name of the Jewish right to statehood. Other arguments deny this charge, insisting that the Lobby’s influence is greatly overstated and to some degree...
11 Pages(2750 words)Essay

...Module Obama Administration - Israelis and the Palestinians The Obama administration has made attempts in the recent past to restart the peace process between Israelis and Palestinians. Over the years, it has been observed that both generally differ in their view for a peaceful decision of their ancient conflict and outlook about the US involvement. However, both would like President Barrack Obama to play a bigger role in resolving this stalemate (PEW Research). Israelis believe that a solution can be found for an independent Palestinian nation to coexist in peace and harmony with Israel (PEW Research). Conversely,...
3 Pages(750 words)Essay

...Political Sciences The Palestinian-Israeli conflict, the ongoing dispute between the Israelis and the Palestinians, has been comprehended as a prototype of a conflict in the phase of peace consolidation and several pertinent issues lie beneath the ultimate peace process. Considering the various obstacles against a final and peaceful conclusion to the Palestinian Israeli conflict, it is most relevant to undertake an analysis of these obstacles and most important solutions to the issues in the region. Several solutions have been suggested for a permanent settlement of the issues in the region and the attempts to broker a two-state solution,...
5 Pages(1250 words)Case Study

...﻿Introduction The first and the second Palestinian Intifadas, or uprisings, were not borne out of isolation but were an immediate outcome of the violent confrontations which preceded them and expressive of the economic misery and socio-political oppression which the Palestinians suffered under the Israeli occupation. As such, the Palestinian Intifada may be defined as a social-political movement engaged in contentious politics for the purpose of bringing the Israeli occupation to an end. Given that the definitions of both intifada stages coincide, it may very well be assumed that the root causes and objects of both are similar. Indeed, as this...
9 Pages(2250 words)Research Paper

Issue Of The Conflict Between Israel And The Palestinians

...﻿Issue Of The Conflict Between Israel And The Palestinians For the current generation the seemingly endless conflict between Israel and the Palestinians has lost all historical perspective. As King Abdullah (1948) writes in his prophetic letter, the idea that the central issue in the conflict was and still is ethnic hatred of Jews by their Arab counterparts would be the usual response from most Americans if asked. Abdullah, however, presents some interesting and at times well founded exceptions to this idea that explain the conflict in a way that removes much of the onus of responsibility from the Palestinians and places it firmly on the Israeli, American and British...
6 Pages(1500 words)Essay

...Order 442967 Topic: The Israelis I would say not ordinary people, but ‘Extraordinary people in an Extraordinary Land’. This Jewish Nation consists of a rich variety of people—rich culturally! In ordinary day to day life, they are just like any other religious people. The special aspect is the challenge of terrorism. As the Israel Nation was born, immigrants from many countries pour into this new Nation, especially Jewish immigrants from Ethiopia and Russia. Everything about the various migrant communities is different and the common unifying factor is the Jewish religion! Their suffering of the past, the will to live and survive as the new Nation is their guiding force. The contradiction in Israel is, the...
2 Pages(500 words)Essay

...Palestinians became refugees in 1947-48 because of many factors, all of which stem from a single event: The United Nations Partition Plan. The UnitedNations in 1948 recommended and voted upon a plan that would partition the area formerly known as the Mandate of Palestine into an Arab state, a Jewish state, and leave Jerusalem and Bethlehem as international areas (Benin & Hajjar). The partitions, however, placed Arab settlements in the areas of Jewish control, and Jewish settlements in areas of Arab control (Price, 2003). Despite heavy Arab opposition to the plan, it was approved and almost immediately fighting broke out between the two sides, both of whom were deeply attached to their homes and saw no reason to abandon it...
1 Pages(250 words)Assignment

Israel and the Palestinians (CASE) Module 4

...or influence to acquire Crimea was met with a cold shoulder by the USA. However, regardless of whether Russia broke international law, Israel should not be an exception that the USA is unable to influence. Diplomatic efforts have failed to bear fruits in ending the Israel-Palestine conflict as they failed between Russia and Ukraine. Thus, the same travel bans and trade sanctions applied for Russia should be reflected on Israel as substantial humanitarian-crisis-evidence exists. References Mideastweb. (2009). Israel, Palestine and the Israeli-Palestinian Conflict (Arab-Israeli Conflict) - A brief history - Part I. Retrieved04/15/14 http://www.mideastweb.org/briefhistory.htm Palestine...
2 Pages(500 words)Essay

Israel and the Palestinians (SLP) Module 4

...Israel and the Palestinians (CASE) Module 4 Affiliation: What is the history (ancient and modern) of this land that explains the current dispute between the Palestinians and Israelis? The Israel-Palestine conflict is based on the acquisition of land that allegedly belongs to either nation. From the 1800s, Zionism had been part of the conflict as a small group of extreme Jews decided to colonize the current Israel-Palestine land. Other areas considered in this conquest were the Americas and Africa before finally deciding to settle in Palestine. The initial immigration did not have any specific effects to the people of Palestine and therefore, no conflicts were reported. However, as the Jews continued to flock in, it is was obvious... that...
2 Pages(500 words)Essay
sponsored ads
Save Your Time for More Important Things
Let us write or edit the essay on your topic "The Israelis and the Palestinians" with a personal 20% discount.
GRAB THE BEST PAPER

Let us find you another Essay on topic The Israelis and the Palestinians for FREE!