Comments (0)
Add to wishlistDelete from wishlist
Cite this document
Summary
In the paper “Trans-Atlantic Slave Trade” the author focuses on one of the most popular examples of human trafficking. It involves the trade of African people to the colonies of the New World that happened around the Atlantic Ocean wherein the slaves were obtained from coastal trading…
Download full paperFile format: .doc, available for editing
HIDE THIS PAPERGRAB THE BEST PAPER96.8% of users find it useful 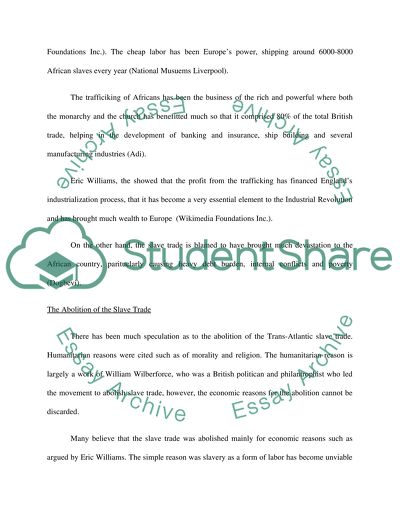 The triangle of trade consisted of three journeys: the outward passage from Europe to Africa with the manufactured goods, the middle passage from Africa to the Americas or the Caribbean’s which carried African captives and commodities and lastly, the homeward passage which carried goods back to Europe (National Maritime Museum).
The slave trade made the bulk of the labor force of the New World. They comprise of the bulk of workers in the sugar plantation which is the most labor-intensive crop, while some also work in harvesting coffee, cotton and tobacco and some also helped in mining (Wikimedia Foundations Inc.). The cheap labor has been Europe’s power, shipping around 6000-8000 African slaves every year (National Museums Liverpool).
The trafficking of Africans has been the business of the rich and powerful where both the monarchy and the church have benefitted much so that it comprised 80% of the total British trade, helping in the development of banking and insurance, shipbuilding and several manufacturing industries (Adi).
Eric Williams, the showed that the profit from the trafficking has financed England’s industrialization process, that it has become a very essential element to the Industrial Revolution and has brought much wealth to Europe (Wikimedia Foundations Inc.).
On the other hand, the slave trade is blamed to have brought much devastation to the African country, particularly causing heavy debt burden, internal conflicts, and poverty (Dogbevi).
The Abolition of the Slave Trade
There has been much speculation as to the abolition of the Trans-Atlantic slave trade. Humanitarian reasons were cited such as morality and religion. The humanitarian reason is largely a work of William Wilberforce, who was a British politician and philanthropist who led the movement to abolish the slave trade, however, the economic reasons for abolition cannot be discarded.
Many believe that the slave trade was abolished mainly for economic reasons such as argued by Eric Williams. The simple reason was slavery as a form of labor has become unviable (www.individuality1977.blogspot.com). It simply becomes impractical for Europe to maintain the status quo.
There have been rebellions on the part of the slaves and it has created fears to the planters who later agreed to free the slaves rather than to continue with the fear of possible attacks. The actions of the people, especially the slaves themselves have made enslavement and trafficking inefficient, unprofitable and dangerous (Adi).
Some have also reasoned that trafficking of Africans to Britain was no longer important and has been a deterrent to some important and advantageous economic links as some of the Carribean planters themselves were in favor of the abolition as “this worked against the interest of some of their commercial rivals” including the foreigners (Adi).
After the abolition of the slave trade in Britain, it has become uncompetitive to other countries, forcing it to press for the slave trade abolition of other nations (Wikimedia Foundations Inc.).
In the South and North America, various reasons also contributed to the decline of the slave trade. Both territories have also become so dependent on human trafficking and have created huge money from the trade of slaves, however, at a later time, there was not much economic need to employ slave labor in the new factories in the North, leading to their abolition (antebellum slavery economics). This event has strengthened its stand against the slave trade. Read More
Share:
Tags
Cite this document
(Trans-Atlantic Slave Trade Assignment Example | Topics and Well Written Essays - 750 words, n.d.)
Trans-Atlantic Slave Trade Assignment Example | Topics and Well Written Essays - 750 words. Retrieved from https://studentshare.org/history/1549612-what-are-the-economic-reasons-for-the-trans-atlantic-slave-trade-and-its-abolition
(Trans-Atlantic Slave Trade Assignment Example | Topics and Well Written Essays - 750 Words)
Trans-Atlantic Slave Trade Assignment Example | Topics and Well Written Essays - 750 Words. https://studentshare.org/history/1549612-what-are-the-economic-reasons-for-the-trans-atlantic-slave-trade-and-its-abolition.
“Trans-Atlantic Slave Trade Assignment Example | Topics and Well Written Essays - 750 Words”. https://studentshare.org/history/1549612-what-are-the-economic-reasons-for-the-trans-atlantic-slave-trade-and-its-abolition.
Comments (0)
Click to create a comment or rate a document

...﻿The Trans-Atlantic Slave Trade 1. The Trans-Atlantic slave trade was one of the largest forced migrations in world history. The slave trade was a long held process from the early 16th century to the mid-19th century during which about 10.5 million Africans were captured from their homes, herded onto ships to the West. On their voyage, the slaves were packed so tightly on board where they could hardly move, and they were sent to entirely strange land. They had to undergo hard times on their way to bondage and even after reaching there. As seen in the...
4 Pages(1000 words)Essay

...﻿The Trans-Atlantic Slave Trade Introduction The time period between the 16th and 18th centuries witnessed around 20 million Africans being transferred to America by crossing the Atlantic. This was the trans-Atlantic slave trade. West Africa was the source of these African slaves and they were mainly made to work on plantations in the United States, Latin America and the Caribbean. The African slaves taken captive had an average life span of just five to seven years and therefore their demand continued to grow during the 18th century and thus the...
6 Pages(1500 words)Research Paper

The Role of Religion in the Trans-Atlantic Slave Trade

...﻿The Role of Religion in the Trans-Atlantic Slave Trade Introduction The transatlantic slave trade was driven by religion especially in the suppression, domestication and control of the African slaves. The European slave traders assisted the African tribal leaders in brutal capture of the slaves who were shipped to their colonies in the Americas where they were forced to work in plantation and industries. The Catholic Church contributed to the development of the trade because it was not opposed to the creation of the new world with the Holy Roman Empire authorizing European involvement in the trade. The justification of the slave traders for their conquest in West and Central Africa was that they needed to convert Africans... into...
8 Pages(2000 words)Essay

... Origin and Development of Atlantic Trade Atlantic slave trade refers to the trade which took place between 16th and 19th centuries across the Atlantic Ocean. The trade originated after the establishment of trade contracts between old world and new world continents. Tidal currents have been for centuries limited the trade, but the emergence of new seafaring technologies enhanced traversing of the Atlantic Ocean. According to historian John Thornton, various geographical and technical factors necessitated exploitation of Africans for slaves by Europeans. Such factors acted as drive towards exploitation of profitable commercial opportunities outside Europe and the desire of creating alternative trade network to the one under control... )....
4 Pages(1000 words)Essay

...﻿The Trans-Atlantic Slave Trade The Muslim in North Africa dominated the sub-Saharan trade well into the first half of the 15th Century. The Portuguese did not want to clash with these North African Muslim Arabs, and when they wanted to trade with Africa, they travelled through to the west coast of Africa. As they travelled, they discovered several technologies that enhanced European navigation through Atlantic Ocean. The Portuguese and other groups that came to Africa had the initial intention of trading in commodities such as gold, and other items that were available in the continent. With time though,...
3 Pages(750 words)Essay

...was conquered, no more masonry has been found. On the East African Coast, East African Literature emerged. The earliest East African literature can be dated to 1520. This work was an anonymous history of Kilwa. This text was written in Arabic. Later literature, poems, and religious text in Swahili appeared. Clearly, as in South Africa, a vibrant culture existed before and during colonization. Finally, the last parallel was the process of colonization. Whether the Portuguese, Dutch, or any other European country, the colonization process used Africans. Africans were used to plunder Africa of natural resources, land, ports, and of course slaves. The colonization also had European buildings and forts placed on...
2 Pages(500 words)Essay

...The Atlantic Slave Trade INTRODUCTION The introduction aims to offer an overview of Atlantic slave trade and present different schools of thought forit; and support one particular view given by an expert on the subject. Common points between the three staple crops and their role in stimulating the need for labor The three great staple crops that slaves produced in the New World were tobacco, coffee, and sugar. The rise in the plantation of these crops induced the need to import labor from Africa. These crops determine the trends of the slave and the master economy. In economy, the slaves...
2 Pages(500 words)Essay

Black Profit: Economic Reasons of the Trans-Atlantic Slave Trade and its End

...Black Profit: Economic Reasons of the Trans-Atlantic Slave Trade and its End Introduction One of the most notable historical accounts is the transatlantic slave trade; wherein the pillars of several ideologies and philosophies sprouted. It has been noted that the relationship between Africa and Europe was mainly economic in nature even before the slave trade, adapting the barter system as a means of obtaining goods (Davidson 1961). There has been a historic relationship between Europe and Africa, consequently followed by America upon its discovery by Christopher Columbus. The discovery of the “New World”...
5 Pages(1250 words)Essay

...Trans-Atlantic Slave Trade Affiliation: Main causes of the Trans-Atlantic Slave Trade The main cause for the trade was the demand for labor in the European colonies like in America. The only place they could get the labor was in Africa because the labor was in excess unlike the labor they were getting in the colonies which was inadequate. The colonies grew sugarcanes, cotton and tobacco in large plantations which was then taken back to the European countries. The laborers were taken from West Africa, shipped across the Atlantic Ocean and then sold to the traders and...
2 Pages(500 words)Essay
sponsored ads
Save Your Time for More Important Things
Let us write or edit the assignment on your topic "Trans-Atlantic Slave Trade" with a personal 20% discount.
GRAB THE BEST PAPER

Let us find you another Assignment on topic Trans-Atlantic Slave Trade for FREE!