Comments (0)
Add to wishlistDelete from wishlist
Cite this document
Summary
This essay concerns the history of African Americans. Thus, it is stated that during World War II millions of African Americans though persecuted through segregation and discrimination served faithfully in the US military in their struggle against Italy, Japan, and Germany. …
Download full paperFile format: .doc, available for editing
HIDE THIS PAPERGRAB THE BEST PAPER98.2% of users find it useful 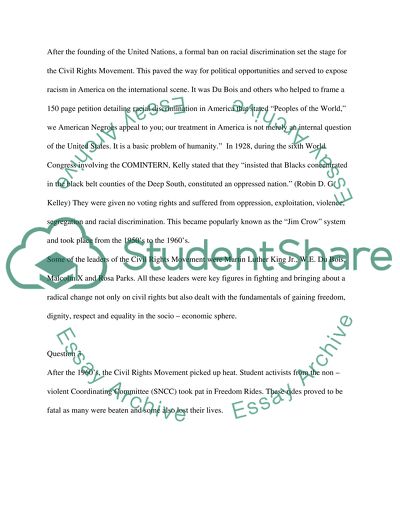 African American History Order No. 212692 No: of pages: 2 Premium 6530 Question World War II was one of the most expensive global conflicts in the history of the world in terms of both life and money. During this war millions of African Americans though persecuted through segregation and discrimination served faithfully in the US military in their struggle against Italy, Japan and Germany. After World War I, everyone, particularly the African Americans hoped to find equality and harmony in the country. They nurtured great expectations due to their excellent work and war records they possessed. There were thousand of Black Americans serving in the war in different capacities such as Black road builders, Black trucking Companies, Black dentists, Black doctors, Black nurses and technicians who worked very hard in their own capacities.
When the war ended, the hope of freedom was what each one of them nurtured in their hearts. It was President Harry. S. Truman, who tried to make their dream come true by bringing the African Americans much closer to their goal of freedom and equality. He took a giant step in signing the executive Order 9981 which emphatically stated, "there shall be equality of treatment and opportunity for all persons in the Armed Services without regard to race, color, religion, or national origin."
Question 2
After the founding of the United Nations, a formal ban on racial discrimination set the stage for the Civil Rights Movement. This paved the way for political opportunities and served to expose racism in America on the international scene. It was Du Bois and others who helped to frame a 150 page petition detailing racial discrimination in America that stated “Peoples of the World,” we American Negroes appeal to you; our treatment in America is not merely an internal question of the United States. It is a basic problem of humanity.” In 1928, during the sixth World Congress involving the COMINTERN, Kelly stated that they “insisted that Blacks concentrated in the black belt counties of the Deep South, constituted an oppressed nation.” (Robin D. G. Kelley) They were given no voting rights and suffered from oppression, exploitation, violence, segregation and racial discrimination. This became popularly known as the “Jim Crow” system and took place from the 1950’s to the 1960’s.
Some of the leaders of the Civil Rights Movement were Martin Luther King Jr., W.E. Du Bois, Malcolm X and Rosa Parks. All these leaders were key figures in fighting and bringing about a radical change not only on civil rights but also dealt with the fundamentals of gaining freedom, dignity, respect and equality in the socio – economic sphere.
Question 3
After the 1960’s, the Civil Rights Movement picked up heat. Student activists from the non – violent Coordinating Committee (SNCC) took pat in Freedom Rides. These rides proved to be fatal as many were beaten and some also lost their lives.
In 1963 the Birmingham campaign was undertaken to desegregate the downtown merchants. The supporters used non – violent tactics to attract more voters. It was considered as unconstitutional and mass arrests were conducted of which King was one.
On August 28th, 1963 a march to the Lincoln Memorial was proposed. This march was a collaboration of all the civil rights organizations and many other supporting organizations. The primary goals of the march was the right to vote, meaningful civil rights laws, fair employment, proper housing, a workable federal works program and a decent education. All these are some of the tactics and goals used during the Civil War.
References:
Robin D. G. Kelly, Hammer and Hoe: Alabama Communists During the Great Depression (Chapel Hill: University of North Carolina Press 1990) p. 23. & pg. 13.
African Americans in World War II
www.school.familyeducation.com/african-american-history/world-war-2/47076.html
See W. E. B. Du Bois, “A Summary of this Petition,” box 637, series A, part II, NAACP Records; and statements by Walter White, Du Bois, and UN representative John Humphrey at the presentation of the NAACP petition, Oct. 23, 1947, ibid. Read More
Share:
Tags
Cite this document
(“African American History Essay Example | Topics and Well Written Essays - 500 words - 1”, n.d.)
Retrieved from https://studentshare.org/history/1545189-african-american-history

...African American History Introduction Timbuktu It is a town in West Africa, in the western region of Mali. Timbuktu was founded by the Tuareg Imashagan in the 11th century. Because of its geographical location, which is situated uniquely, it was used as a meeting point for the Wangara, Songhai, Fulani, Tuareg and the Arabs. Timbuktu flourished from trade, which was between West Africa and North Africa. The main trade items were gold, salt, ivory and slaves. Slave trade flourished because of the existence of the Arabs. Timbuktu was brought under the French rule in 1893, up until Mali’s independence in 1960 (Franklin, John H, and Alfred, 68). Phillis Wheatley She was a victim of slave...
1 Pages(250 words)Essay

...﻿African American History (1600-1877) OUTLINE The events that shaped African American history and converted the blacks from being slave to free people were forced transportation of black people for slave trade, American Revolution, the Great Awakening, the very famous war of 1812 and the civil war. Slave trade is the first incident that shows the deprivation of Black population of their basic human rights as blacks were transported to other lands for labour purposes. Second in line is the event of Great Awakening, which helped people to recognize their existence according to their religion, as Great Awakening resulted in...
11 Pages(2750 words)Research Paper
sponsored ads
Save Your Time for More Important Things
Let us write or edit the essay on your topic "African American History" with a personal 20% discount.
GRAB THE BEST PAPER

Let us find you another Essay on topic African American History for FREE!