Albert Camus: The Rebel in the 20th Century - Essay Example

Comments (0)
Add to wishlistDelete from wishlist
Cite this document
Summary
In The Rebel, Camus reveals how 20th-century revolutions/governments put an end to the Rebel by rejecting values that had once justified, even provoked, rebellion. In their place, these states created a totalitarianism that Camus aptly describes as State Terrorism; the denial of an individual’s validity – the irrelevance of The Rebel. …
Download full paperFile format: .doc, available for editing
HIDE THIS PAPERGRAB THE BEST PAPER92% of users find it useful 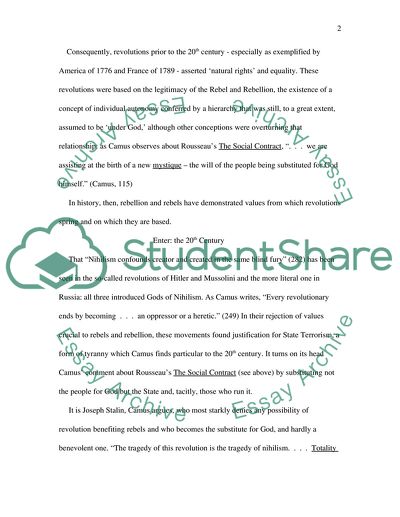 Extract of sample "Albert Camus: The Rebel in the 20th Century"

Albert Camus: The Rebel in the 20th Century In his analysis of History, the Rebel and Revolution, Albert Camus is clearly sympathetic to rebels. Locating them in virtually every major civilization and historical era, he asserts that rebels and rebellion allow the entire human organism to be liberated while also supporting a desire for “order” and “unity” – in the sense of justice. Such values are apparent throughout history. Unfortunately, Camus finds 20th century revolutions not only anti-rebel but also “total;” they seek essentially – only – domination of the world by justifying nihilism as a principle, rejecting the validity of the individual and creating a previously unknown entity: State Terrorism.
Rebels, Rebellion and Values
Camus writes that “every act of rebellion tacitly invokes a value.”(Camus, 15) This is seen in a slave’s willingness to say ‘no,” to insist that their slavery has gone on far too long or has become so intolerable that they must establish their existence as valid by defying the ‘master,’ by becoming a rebel. This defiance reflects a desire for order and seeks to establish a point beyond which a human being may not be forced to go. It also establishes an individual as a value in itself. Their rebellion is “. . . a transition from facts to rights.” (Camus, 15). Even Camus’ Metaphysical Rebel “attacks a shattered world in order to demand unity from it.” (Camus, 23-4).
Consequently, revolutions prior to the 20th century - especially as exemplified by
America of 1776 and France of 1789 - asserted ‘natural rights’ and equality. These revolutions were based on the legitimacy of the Rebel and Rebellion, the existence of a concept of individual autonomy conferred by a hierarchy that was still, to a great extent, assumed to be ‘under God,’ although other conceptions were overturning that relationship: as Camus observes about Rousseau’s The Social Contract, “. . . we are assisting at the birth of a new mystique – the will of the people being substituted for God himself.” (Camus, 115)
In history, then, rebellion and rebels have demonstrated values from which revolutions spring and on which they are based.
Enter: the 20th Century
That “Nihilism confounds creator and created in the same blind fury” (282) has been seen in the so-called revolutions of Hitler and Mussolini and the more literal one in Russia: all three introduced Gods of Nihilism. As Camus writes, “Every revolutionary ends by becoming . . . an oppressor or a heretic.” (249) In their rejection of values crucial to rebels and rebellion, these movements found justification for State Terrorism, a form of tyranny which Camus finds particular to the 20th century. It turns on its head Camus’ comment about Rousseau’s The Social Contract (see above) by substituting not the people for God but the State and, tacitly, those who run it.
It is Joseph Stalin, Camus argues, who most starkly denies any possibility of revolution benefiting rebels and who becomes the substitute for God, and hardly a benevolent one. “The tragedy of this revolution is the tragedy of nihilism. . . . Totality is not unity.” (250, emphasis added) Under Stalin, the State, not values or individuals, becomes the justification for any action, however irrational. This leads Camus to write, “The revolution of the 20th century kills . . . the principles themselves and consecrates historical nihilism.” (246) Values once inherent in rebellion have been rejected, replaced by a State which “refuse[s] to admit that any one life is the equivalent of any other.” (170) Moreover, the Russian revolution, as Camus writes, “. . . is fighting for universal dominion. Total revolution ends by demanding . . . the control of the world.” (107)
Conclusion
In The Rebel, Camus reveals how 20th century revolutions/governments put an end to the Rebel by rejecting values that had once justified, even provoked, rebellion. In their place, these states created a totalitarianism that Camus aptly describes as State Terrorism; the denial of an individual’s validity – the irrelevance of The Rebel.

(Albert Camus: The Rebel in the 20th Century Essay)
https://studentshare.org/history/1540057-albert-camus-the-rebel-in-the-20th-century.

“Albert Camus: The Rebel in the 20th Century Essay”, n.d. https://studentshare.org/history/1540057-albert-camus-the-rebel-in-the-20th-century.
Comments (0)
Click to create a comment or rate a document

CHECK THESE SAMPLES OF Albert Camus: The Rebel in the 20th Century

A Comparison between Gandhi and Albert Camus

...? A Comparison between Gandhi and Albert Camus 11 May OUTLINE Mohandas Karamchand Gandhi [1898-1947] and Albert Camus [1913-1960] were almost contemporaries. Both were political thinkers and players. Any direct links between them in would be a bit superficial but both were great humanists and cared for the world around them [Dasgupta]. A valid way to understand them would be to consider the effect of their environment upon their thinking and actions. Their respective philosophies are also studied in this essay. Two of their works, “My experiments with Truth” by Gandhi and “The Stranger” by Albert Camus are also compared to understand...
5 Pages(1250 words)Research Paper

...?Meursault’s Indifference From the itself, the novel speaks about the world from the view of a universal indifference of one person. The Stranger by Albert Camus made the tenets of the philosophy of Absurdism work in the context of the narrative. Absurdism, in this sense, is not contained to logic but more of the failure of a man to find the meaning of life despite his efforts of seeking it. This could be the reason of Meursault's indifference towards anything. The character of Meursault does not really belong to the typical qualifications of a protagonist; the readers might have seen him as annoying rather than 'neutral' as what the character tries to project in the story. Meursault's character is a...
2 Pages(500 words)Essay

The Absurd in Albert Camus The Plague

...? The Absurd in Albert Camus’ The Plague Albert Camus’s story “The Plague” is takes place at the end of World War II and on one level is an allegory about the epidemic of the bubonic plague but on a deeper level examines the presence of evil and immorality that exists within humanity itself. To fully express this idea, Camus relies on the absurd to prove his point by taking an extreme position of the human condition picturing humanity to be indifferent and living in a universe that has no meaning and no purpose with no God or any type of order, sense or reason. This is the most absurd position possible to take but he uses the plague as proof that death can strike any one at any time with no reason or warning. However, this use... this...
4 Pages(1000 words)Essay

... English Literature November 29, “The Stranger" by Albert Camus The Stranger by Albert Camus is regarded as one of the prominent works belonging to the genre of Absurdism. Camus’ “The Stranger” was published in the dark days of the World War II, during the Existentialist movement, along with the essay collection "The Myth of Sisyphus". Meursault is the protagonist of Camus' "The Stranger", (Camus) who conveys Camus' ideas of independence, freedom and life. Meursault is a representative of absurdists who believes that the world was meaningless, absurd, and indifferent. This novel unravels the story of Meursault, who is emotionally detached to his surrounding living beings. He is an anti-hero, who is accused of murder of an Arab... ".       ...
4 Pages(1000 words)Essay

...?ALBERT CAMUS “THE GUEST ISOLATION OF A MAN “Isolation is the sum total of wretchedness to a man.”- Thomas Carlyle The guest is written by an Algerian- born French novelist Albert Camus. In this short story he has portrayed many emotions and moral conflicts of a man. The writer has blended his political knowledge with his creativeness, and has given his readers a variety of psychological themes to think about. The story The Guest highlights the isolation of a man; this isolation is because of many reasons. The protagonist of the plot, Daru who was an Algerian –born French School headmaster, after the World War 2, had been appointed by the Government to a school at the...
3 Pages(750 words)Essay

...The Stranger The Stranger is written by Albert Camus, in early 1940’s in France during the era of World war. The story in the novel revolves around a man named Meursault who is an emotionally disconnected unethical person. He is known to be an apathetic character whose religious views do not revolve around God or the life hereafter. His apathetic behavior is justified by his uncaring attitude at his mother’s funeral. He murders a person who he does not even know and yet is not guilty over his filthy act because everything in life does not have a meaning for him. Marie Cardona is one of the main characters in Albert Camus’s The Stranger who will be discussed in this...
3 Pages(750 words)Essay

...?Existentialism by Albert Camus Introduction Existentialism is perceived not so much as traditional philosophy as it is a revolution against ical metaphysics; more personally it can be viewed as a “a constant confrontation between man and his own obscurity” (Camus 54, cited in Hollar 24). It is defined as “a doctrine which makes human life possible and, in addition, declares that every truth and every action implies a human setting and a human subjectivity…existence precedes essence, or, if you prefer…subjectivity must be the starting point” (Sartre, cited in Daigle 10). This broad school of thought encompasses a wide range of application; in The Stranger, the scope and depth of...
3 Pages(750 words)Essay

...Comparing and Contrasting Albert Camus and Hannah Arendt Hannah Arendt is considered a with a passion who demonstrated what she wrote about. In most of her books, she wrote about love of the world. According to the author, we are supposed to love the world the way it includes all the evil and good things that belong in this world. That is exactly what Hannah did. She did continually love the world just as the way she described it. Besides that, the author has also moved on to open a center that is dealing with counseling and nonpartisan political ideologies. Hannah has also played a major role in developing good ethical ideologies through philosophical arguments in her books (Hannah Arendt). Hannah has...
1 Pages(250 words)Essay

...ALBERT CAMUS Both The Stranger and The Myth of Sisyphus are excellent illustrations of Albert Camus’ views on existentialism. That is not to say theytell the same story in the same format. Indeed, reading them side-by-side provides a great deal of nuance to a philosophy that is sometimes stereotyped simply as: God is dead and the world is an empty place. Camus’ vision is more various and is in some ways more interesting than Samuel Beckett’s—which is exemplified by the patient and ridiculous vagrants of Waiting for Godot. Camus’ version comes out from an engagement with the world and its passions and is indeed more humanist than the...
12 Pages(3000 words)Term Paper
sponsored ads
Save Your Time for More Important Things
Let us write or edit the essay on your topic "Albert Camus: The Rebel in the 20th Century" with a personal 20% discount.
GRAB THE BEST PAPER

Let us find you another Essay on topic Albert Camus: The Rebel in the 20th Century for FREE!