Comments (0)
Add to wishlistDelete from wishlist
Cite this document
Summary
The Manhattan Project was the American program for researching and developing the first atomic bombs. The weapons produced were based solely upon the principles of nuclear fission of uranium 235 and plutonium 239, chain reactions liberating immense amounts of destructive heat energy…
Download full paperFile format: .doc, available for editing
HIDE THIS PAPERGRAB THE BEST PAPER92.4% of users find it useful 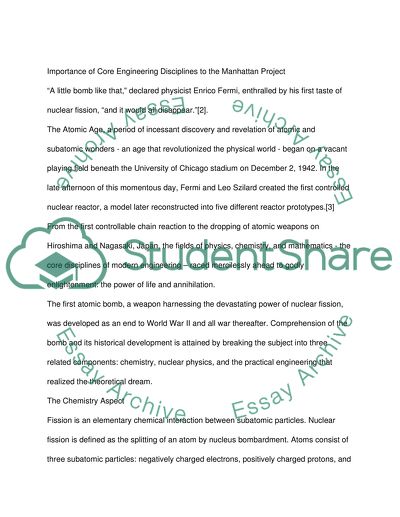 Download file to see previous pages In the quest for an atomic-powered weapon, the secrets of nuclear physics and chemistry were exposed. Following the theoretical assessment of producing a controllable nuclear chain reactor, physical engineering was employed to construct the specific mechanics required. Communication contributed as much to the success of the Manhattan Project as did scientific discovery. Although the creation of the first atomic weapon was clearly a technological triumph, the question of morality and responsibility to ethics will forever plague the topic. Regardless of whether America was morally justified in deploying atomic weaponry on Japan, though, the Manhattan Project will always be an excellent example of collaboration and communication in scientific and engineering fields.
The Atomic Age, a period of incessant discovery and revelation of atomic and subatomic wonders - an age that revolutionized the physical world - began on a vacant playing field beneath the University of Chicago stadium on December 2, 1942. In the late afternoon of this momentous day, Fermi and Leo Szilard created the first controlled nuclear reactor, a model later reconstructed into five different reactor prototypes.[3] From the first controllable chain reaction to the dropping of atomic weapons on Hiroshima and Nagasaki, Japan, the fields of physics, chemistry, and mathematics - the core disciplines of modern engineering - raced mercilessly ahead to godly enlightenment: the power of life and annihilation.
The first atomic bomb, a weapon harnessing the devastating power of nuclear fission, was developed as an end to World War II and all war thereafter. Comprehension of the bomb and its historical development is attained by breaking the subject into three related components: chemistry, nuclear physics, and the practical engineering that realized the theoretical dream.
The Chemistry Aspect
Fission is an elementary chemical interaction between subatomic particles. Nuclear fission is defined as the splitting of an atom by nucleus bombardment. Atoms consist of three subatomic particles: negatively charged electrons, positively charged protons, and neutrons, which have no electrical charge. Atomic nuclei are dense cores of atoms composed of neutrons and protons, and are thus positively charged. Chemical reactions, from basic acid-base titrations to nuclear fission, involve the collision of atomic particles.
Fission begins with the high-energy collision of neutrons with the nucleus of another atom. Protons cannot partake in nuclear bombardment because of the electrostatic repulsion between positively-charged protons and nuclei. For fission to proceed, a neutron fired at the atom must fuse with the nucleus, producing a less-stable isotope. The "heavy" atom, chemically volatile, will split into two stable atoms, discharge neutrons, and generate energy (in the form of Gamma radiation). The neutrons released are free to collide ...Download file to see next pagesRead More
Share:
Tags
Cite this document
(“Manhattan Project Essay Example | Topics and Well Written Essays - 3000 words”, n.d.)
Manhattan Project Essay Example | Topics and Well Written Essays - 3000 words. Retrieved from https://studentshare.org/history/1510822-manhattan-project

CHECK THESE SAMPLES OF Manhattan Project

Another important purpose of this case is to focus on the plans established by me for maximum utilization of the resources of the hospital in such a way which will help to achieve the goals of the organization.
I would determine the requirement of the staff of the food service department by evaluating the ratio of patients and staff. More patients require for delivering effective service. Ineffective service of the food department determines the requirement of the staff. For improving the quality of service I would require more new staff (McClay).
As a manager, I would maintain different levels like food production, service delivery, quality testing, etc in the food department of the hospital. From food production to con...
10 Pages(2500 words)Case Study
sponsored ads
Save Your Time for More Important Things
Let us write or edit the essay on your topic "Manhattan Project" with a personal 20% discount.
GRAB THE BEST PAPER

Let us find you another Essay on topic Manhattan Project for FREE!