Comments (0)
Add to wishlistDelete from wishlist
Cite this document
Summary
The main questions of the paper "Strategic and Organization Change at Black & Decker" are: Using the strategic approaches described in CAPSIM, how would you characterize Black &  Decker’s international expansion during the 1950s and 1960s? What strategy was the company pursuing?…
Download full paperFile format: .doc, available for editing
HIDE THIS PAPERGRAB THE BEST PAPER94.9% of users find it useful 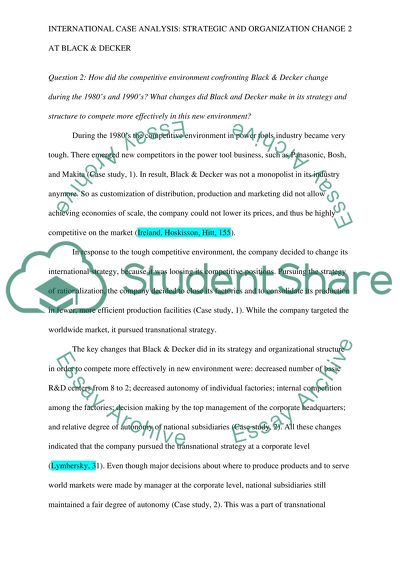 Extract of sample "Strategic and Organization Change at Black & Decker"

Download file to see previous pages What was the key feature of the international organization structure that Black & Decker operated with at this time? Do you think Black & Decker’s strategy and structure make sense, given the competition at that time?
Black & Decker’s international expansion strategy during the 1950s and 1960s can be characterized as a multi-domestic strategy. From the case study, it becomes known that at that period the company grew rapidly due to its strong brand name and near-monopoly share of its products. The company’s management decided that in order to enter new markets and develop its business successfully it was necessary to customize the products to local markets, rather than to provide universal products for all markets. For this strategic approach, Black & Decker observed customization strategy more effective than globalization strategy. Therefore, Black & Decker’s international growth approach was characterized by the key features that were common for multi-domestic strategy, including: decentralized organizational structure; wholly-owned subsidiaries in each country with a freedom to develop, manufacture, and market the company’s products; and customization of marketing, engineering, manufacturing, etc. to local markets (Lymbersky, 30).
Undoubtedly, during the 1950s and 1960s, Black & Decker’s strategy and structure made sense, given the competition at that time. Considering the fact that at that period Black & Decker was almost a monopolist in consumer and professional power tools markets, the company was enabled to set the prices for its products not looking for the economies of scales. Focusing mainly on international expansion through local customization, the company did not pay much attention to its pricing strategy.
During the 1980s the competitive environment in the power tools industry became very tough. There emerged new competitors in the power tool business, such as Panasonic, Bosh, and Makita (Case study, 1). In result, Black & Decker was not a monopolist in its industry anymore. So as customization of distribution, production, and marketing did not allow achieving economies of scale, the company could not lower its prices and thus be highly competitive on the market (Ireland, Hoskisson, Hitt, 155). In response to the tough competitive environment, the company decided to change its international strategy, because it was losing its competitive positions. Pursuing the strategy of rationalization, the company decided to close its factories and to consolidate its production in fewer, more efficient production facilities (Case study, 1). While the company targeted the worldwide market, it pursued a transnational strategy. The key changes that Black & Decker did in its strategy and organizational structure in order to compete more effectively in new environment were: decreased number of basic R&D centers from 8 to 2; decreased autonomy of individual factories; internal competition among the factories; decision making by the top management of the corporate headquarters; and relative degree of autonomy of national subsidiaries (Case study, 2). All these changes indicated that the company pursued the transnational strategy at a corporate level (Lymbersky, 31).  ...Download file to see next pagesRead More
Share:
Tags
Cite this document
(Strategic and Organization Change at Black & Decker Case Study, n.d.)
Strategic and Organization Change at Black & Decker Case Study. Retrieved from https://studentshare.org/history/1409101-international-case-analysis
(Strategic and Organization Change at Black & Decker Case Study)
Strategic and Organization Change at Black & Decker Case Study. https://studentshare.org/history/1409101-international-case-analysis.
“Strategic and Organization Change at Black & Decker Case Study”, n.d. https://studentshare.org/history/1409101-international-case-analysis.
Comments (0)
Click to create a comment or rate a document

CHECK THESE SAMPLES OF Strategic and Organization Change at Black & Decker

An organization can go through a structural change. This can be due to a takeover or a complete change of management. In this type of change, the way of working and many dimensions of business activity is altered. This move is usually towards modernization and staying up with the pace but is too fast and sudden, and thus hard for the stakeholders to adjust with. Then there is a change brought about by the change in the services or goods produced and provided. This is usually a positive ch...
6 Pages(1500 words)Article
sponsored ads
Save Your Time for More Important Things
Let us write or edit the case study on your topic "Strategic and Organization Change at Black & Decker" with a personal 20% discount.
GRAB THE BEST PAPER

Let us find you another Case Study on topic Strategic and Organization Change at Black & Decker for FREE!