Comments (0)
Add to wishlistDelete from wishlist
Cite this document
Summary
It is a critical ingredient in many flu and cold remedies (ASHLEY & CURRIE, 2009). When it is combined with opioid analgesics, it can also be used to manage more serious pain…
Download full paperFile format: .doc, available for editing
HIDE THIS PAPERGRAB THE BEST PAPER91.7% of users find it useful 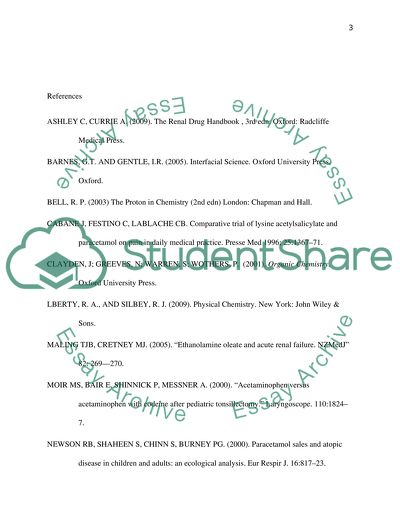 Health sciences and medicine Paracetamol is mainly used for the relief of headaches together with some other minor pains and aches. It is a critical ingredient in many flu and cold remedies (ASHLEY & CURRIE, 2009). When it is combined with opioid analgesics, it can also be used to manage more serious pain like post-surgical and the provision of palliative care in the patients with cases of advanced cancer (ASHLEY & CURRIE, 2009).
PEG 400 has some unique properties that make it its formulation usable in many applications. It has a quite low toxicity and as a result, it is extensively used in a number of pharmaceutical formulations (BARNES, & GENTLE, 2005). Nevertheless, it has lately been used in the making of E-Liquid for the electronic cigarettes, or the personal vaporizers.
Propylene glycol provides an exceptional combination of properties, such as not being readily reactive with some other substances. For a period of more than five decades, we find that it has been used in an extensive range of industrial and consumer applications, whereby it might be used as an agent of emulsification, humectant for the retaining of moisture or even solvent (LBERTY & SILBEY, 2009).
Sodium acetate is the acetic acid’s sodium salt. There are several applications that sodium acetate are used. This is because it is a cost-effective chemical that can be used extensively. Some of its uses are application as picking agent and food addictive or even a laboratory reagent (PRESCOTT, 2006). In addition, it is a major ingredient in the portable, reusable heating packs that are chemical-based.
References
ASHLEY C, CURRIE A. (2009). The Renal Drug Handbook , 3rd edn. Oxford: Radcliffe Medical Press.
BARNES, G.T. AND GENTLE, I.R. (2005). Interfacial Science. Oxford University Press, Oxford.
BELL, R. P. (2003) The Proton in Chemistry (2nd edn) London: Chapman and Hall.
CABANE J, FESTINO C, LABLACHE CB. Comparative trial of lysine acetylsalicylate and paracetamol on pain in daily medical practice. Presse Med 1996; 25:1367–71.
CLAYDEN, J; GREEVES, N; WARREN, S; WOTHERS, P. (2001). Organic Chemistry. Oxford University Press.
LBERTY, R. A., AND SILBEY, R. J. (2009). Physical Chemistry. New York: John Wiley & Sons.
MALING TJB, CRETNEY MJ. (2005). “Ethanolamine oleate and acute renal failure. NZMedJ” 82: 269—270.
MOIR MS, BAIR E, SHINNICK P, MESSNER A. (2000). “Acetaminophen versus acetaminophen with codeine after pediatric tonsillectomy.” Laryngoscope. 110:1824–7.
NEWSON RB, SHAHEEN S, CHINN S, BURNEY PG. (2000). Paracetamol sales and atopic disease in children and adults: an ecological analysis. Eur Respir J. 16:817–23.
PRESCOTT LF. (2006).Paracetamol (Acetaminophen): A Critical Bibliographic Review. London, Taylor & Francis. Read More
Share:
Tags
Cite this document
(“Questions Essay Example | Topics and Well Written Essays - 250 words - 25”, n.d.)
Questions Essay Example | Topics and Well Written Essays - 250 words - 25. Retrieved from https://studentshare.org/health-sciences-medicine/1634020-questions