Comments (0)
Add to wishlistDelete from wishlist
Cite this document
Summary
It mainly focused on calculating the effect size of the therapy. The study focused moderator variables such as type of treatment,…
Download full paperFile format: .doc, available for editing
HIDE THIS PAPERGRAB THE BEST PAPER91% of users find it useful 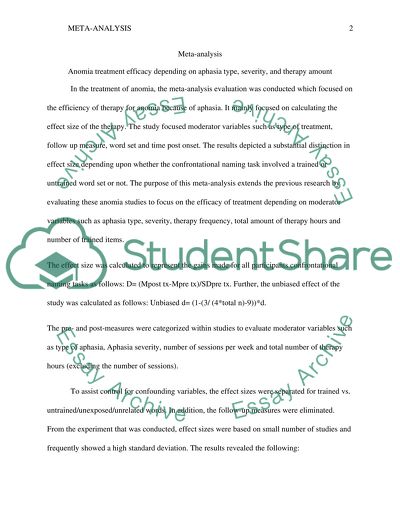 Meta-analysis Meta-analysis Anomia treatment efficacy depending on aphasia type, severity, and therapy amount In the treatment of anomia, the meta-analysis evaluation was conducted which focused on the efficiency of therapy for anomia because of aphasia. It mainly focused on calculating the effect size of the therapy. The study focused moderator variables such as type of treatment, follow up measure, word set and time post onset. The results depicted a substantial distinction in effect size depending upon whether the confrontational naming task involved a trained or untrained word set or not. The purpose of this meta-analysis extends the previous research by evaluating these anomia studies to focus on the efficacy of treatment depending on moderator variables such as aphasia type, severity, therapy frequency, total amount of therapy hours and number of trained items.
The effect size was calculated to represent the gains made for all participants confrontational naming tasks as follows: D= (Mpost tx-Mpre tx)/SDpre tx. Further, the unbiased effect of the study was calculated as follows: Unbiased d= (1-(3/ (4*total n)-9))*d.
The pre- and post-measures were categorized within studies to evaluate moderator variables such as type of aphasia, Aphasia severity, number of sessions per week and total number of therapy hours (excluding the number of sessions).
To assist control for confounding variables, the effect sizes were separated for trained vs. untrained/unexposed/unrelated words. In addition, the follow-up measures were eliminated. From the experiment that was conducted, effect sizes were based on small number of studies and frequently showed a high standard deviation. The results revealed the following:
Non-fluent aphasia makes a greater gain in anomia therapy versus those with fluent aphasia.
Mild aphasia make more gains in anomia therapy than moderate or severe aphasia
Weekly frequency of therapy is not correlated with efficacy since patients recorded more gains for trained words after 2-3 times a week.
Increased number of therapy is more efficacious for trained words
Lower effect size was recorded for trained words. However, large gains were seen for large sets, therefore, increased number of words might offset the lower effect size for larger sets.
Reference
Wisenburn, B. (2008). Anomia treatment efficacy depending on aphasia type, severity, an
therapy amount. 2008 Annual Convention of the American-Speech-Language-Hearing
Association, Chicago. Read More
Share:
Tags
Cite this document
(“Summary Article Example | Topics and Well Written Essays - 500 words - 2”, n.d.)
Summary Article Example | Topics and Well Written Essays - 500 words - 2. Retrieved from https://studentshare.org/health-sciences-medicine/1606882-summary

...Summary Content-Based Instruction Can Make ESL Teaching More Efficient in Korea One of the sources used for this essay (Met, 1991) makes an analogy between English study and learning how to play a musical instrument to demonstrate the chancy character of ESL instruction through the common practice of concentrating the lessons on grammar. The language-focused ESL class is compared to a music class that confines its studies to the mastery of musical keys, scales and notes. No meaningful results can be expected from this instructional method if the music students do not get their hands on the musical instrument of their choice and actually play it on a regular basis until they do it right. In the same manner, ESL students...
2 Pages(500 words)Essay
sponsored ads
Save Your Time for More Important Things
Let us write or edit the article on your topic "Summary" with a personal 20% discount.
GRAB THE BEST PAPER

Let us find you another Article on topic Summary for FREE!