Comments (0)
Add to wishlist Delete from wishlist
Cite this document
Summary
This essay analyses the embryonic stem cell research because they consider embryonic stem cells treatment as one of the workable options to treat many diseases, injuries, and malfunctions. Stem cells are the ‘source’ for all the external as well as the internal human organs and tissues…
Download full paper File format: .doc, available for editing
HIDE THIS PAPERGRAB THE BEST PAPER94.9% of users find it useful 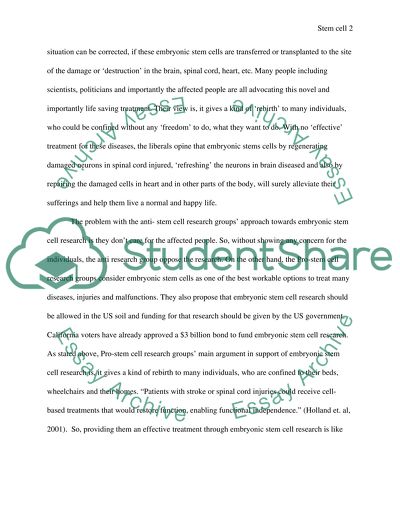 Extract of sample "Why stem cell research is right"

Why stem cell research is right Human embryos will develop with the formation and development of stem cells. That is, the stems cells only transform into various organs and tissues, as the embryo grows into a fetus. So, stem cells are the ‘source’ for all the external as well as the internal human organs and tissues. “Stem Cells are the source from which the bodys tissues replenish themselves.”(Porter, 2006). Pro-group believe these stem cells from the embryo can be grown into any organs that may be needed for human transplantation. “If scientists can reliably direct the differentiation of embryonic stem cells into specific cell types, they may be able to use the resulting, differentiated cells to treat certain diseases at some point in the future” (stemcells.nih.gov, 2008). There are many people who suffer because of injuries and diseases, to brain, spinal cord, heart, etc. Those injuries and diseases could result in physical and mental disabilities. But, they can be treated and cured by injecting or transplanting the extracted embryonic stem cells to the affected parts, helping them to live a normal and purposeful life.
American liberals support the embryonic stem cell research because they consider embryonic stem cells treatment as one of the workable options to treat many diseases, injuries and malfunctions. They point out the results of many studies done by scientists, who have stated that embryonic stem cells can cure many medical problems including spinal cord injury related paraplegia, quadriplegia; also brain related multiple sclerosis, Parkinsons disease, Alzheimers disease, heart diseases, cancer, etc, etc. Many Americans and people all over the world face innumerable sufferings because of the above mentioned diseases. That is, when the injured or the diseased person’s neurons and other cells gets damaged, it could leave them ‘disabled’ both physically as well as mentally. In some cases, it could even lead to deaths. But, this grave situation can be corrected, if these embryonic stem cells are transferred or transplanted to the site of the damage or ‘destruction’ in the brain, spinal cord, heart, etc. Many people including scientists, politicians and importantly the affected people are all advocating this novel and importantly life saving treatment. Their view is, it gives a kind of ‘rebirth’ to many individuals, who could be confined without any ‘freedom’ to do, what they want to do. With no ‘effective’ treatment for these diseases, the liberals opine that embryonic stems cells by regenerating damaged neurons in spinal cord injured, ‘refreshing’ the neurons in brain diseased and also by repairing the damaged cells in heart and in other parts of the body, will surely alleviate their sufferings and help them live a normal and happy life.
The problem with the anti- stem cell research groups’ approach towards embryonic stem cell research is they don’t care for the affected people. So, without showing any concern for the individuals, the anti research group oppose the research. On the other hand, the Pro-stem cell research groups consider embryonic stem cells as one of the best workable options to treat many diseases, injuries and malfunctions. They also propose that embryonic stem cell research should be allowed in the US soil and funding for that research should be given by the US government. California voters have already approved a $3 billion bond to fund embryonic stem cell research. As stated above, Pro-stem cell research groups’ main argument in support of embryonic stem cell research is, it gives a kind of rebirth to many individuals, who are confined to their beds, wheelchairs and their homes. “Patients with stroke or spinal cord injuries could receive cell-based treatments that would restore function, enabling functional independence.” (Holland et. al, 2001). So, providing them an effective treatment through embryonic stem cell research is like giving them a new lease of life and aiding them to live a normal and happy life achieving all their wishes, ambitions…
References:
Holland, S, Lebacqz, K and Zoloth, L. (2001). The Human Embryonic Stem Cell Debate:
Science, Ethics, and Public Policy Debate. Massachusetts: MIT Press.
Porter, R. (2006). The Cambridge History of Medicine. Cambridge: Cambridge
University Press
stemcells.nih.gov. (2008, February 20). Stem Cell Basics: How are embryonic stem
cells stimulated to differentiate? Retrieved April 28, 2010 from
http://stemcells.nih.gov/info/basics/basics3.asp Read More
Share:
Tags
Cite this document
(“Why stem cell research is right Essay Example | Topics and Well Written Essays - 500 words”, n.d.)
Why stem cell research is right Essay Example | Topics and Well Written Essays - 500 words. Retrieved from https://studentshare.org/health-sciences-medicine/1566247-my-writing

CHECK THESE SAMPLES OF Why stem cell research is right

As time goes by, people often think about what could be the next milestone for healthcare: Will doctors be able to cure cancer? Will cures be discovered for Parkinson’s disease, multiple sclerosis, and diabetes? Will we replace organs with mechanical man-made machines? It may surprise people but technology has made it possible to cure debilitating diseases as Parkinson’s disease, multiple sclerosis, diabetes; even the production of organs may not be far in the future considering these healthcare breakthroughs. These newly developing technologies could yield the biggest medical discovery yet. However, people are fighting against its discovery, and among them, even the President of the United States. This technology that...
11 Pages (2750 words) Term Paper

...Context of the Paper To begin with, the of the paper is very much apt for the content. Although the could have come up with a more direct title, the title “Developing a Research base for Intravenous Peripheral cannula re-sites. A randomized controlled trial” captures the essence of the paper and what the authors aim to address. They, however, could have made it more direct to the point by maybe saying that the study is about a comparison between 3 day cannula re-sites and cannula re-sites as dictated by clinical condition. Nonetheless, the chosen t title is suitable enough to briefly inform the reader of the topic of the research. Two hypotheses were tested in this paper. There are two groups that were compared in the paper...
6 Pages (1500 words) Case Study

Research ethics was maintained as the identity of the individuals participating was kept secret. As far as the validity of the study was concerned, the researchers attempted to use content validity in order to get an accurate response. The content validity focused on measuring off the ethnicities and gender percentages within the area and attempting to get a random sample of individuals via the phone. Their approach to random calling allowed for a significant random sample in the study. There were a few issues, however, with this type of approach. Those answering the phone sometimes were not always the desired individual, and not all of the desired people were surveyed. Different replacements did have to be used, and the attempt w...
6 Pages (1500 words) Literature review

13 Pages (3250 words) Assignment
sponsored ads
Save Your Time for More Important Things
Let us write or edit the essay on your topic "Why stem cell research is right" with a personal 20% discount.
GRAB THE BEST PAPER

Let us find you another Essay on topic Why stem cell research is right for FREE!