Comments (0)
Add to wishlistDelete from wishlist
Cite this document
Summary
The National Health Service (NHS) is the UK's flagship public health care system and also, the largest organisation in Europe from the vantage point of budget and employment (NHS official website, 2006). According to independent sources (Wikipedia, 2006), it employs over 1 million people and its expenditures are more than $140 billion…
Download full paperFile format: .doc, available for editing
HIDE THIS PAPERGRAB THE BEST PAPER92.9% of users find it useful 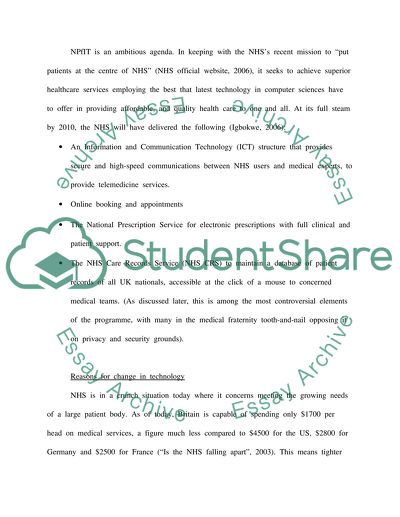 Download file to see previous pages The National Programme for IT (NPfIT) thus ambitiously laid out involve costs in the range of $11-55 billion ("Costs and privacy concerns erode doctors' confidence in NHS plan", 10 Jan 2006) and therefore, comes under the careful scrutiny of public opinion.
The aim of this case study is to understand the issues that arise in the implementation of the "world's largest civil IT project" (Tony Collins, 25 Apr 2006), its tangible and intangible benefits, costs involved, scopes and limitations, problem areas and to finally, suggest, as well as recommend, acceptable and cost-feasible solutions to the aforementioned problems.
NPfIT is an ambitious agenda. In keeping with the NHS's recent mission to "put patients at the centre of NHS" (NHS official website, 2006), it seeks to achieve superior healthcare services employing the best that latest technology in computer sciences have to offer in providing affordable, and quality health care to one and all. At its full steam by 2010, the NHS will have delivered the following (Igbokwe, 2006):
An Information and Communication Technology (ICT) structure that provides secure and high-speed communications between NHS users and medical experts, to provide telemedicine services.
Online booking and appointments
The National Prescription Service for electronic prescriptions with full clinical and patient support.
The NHS Care Records Service (NHS CRS) to maintain a database of patient records of all UK nationals, accessible at the click of a mouse to concerned medical teams. (As discussed later, this is among the most controversial elements of the programme, with many in the medical fraternity tooth-and-nail opposing it on privacy and security grounds).
Reasons for change in technology
NHS is in a crunch situation today where it concerns meeting the growing needs of a large patient body. As of today, Britain is capable of spending only $1700 per head on medical services, a figure much less compared to $4500 for the US, $2800 for Germany and $2500 for France ("Is the NHS falling apart", 2003). This means tighter constraints on existing resources such as beds in hospitals, and availability of medical care and surgical treatment. In its pursuit of a lean framework for the organisation, chancellor Gordon Brown has recommended an efficiency proposal to cut costs by $36 billion come 2008. A full-scale IT management of the present system will alleviate many problems that accrue out of an overstretched infrastructure. Information, if available at the right sources at the right time, can not only save vital time and expenditure, it can actually save many lives and improve the state of present health care services being provided. According to a survey made ...Download file to see next pagesRead More
Share:
Tags
Cite this document
(“National Health Service Assignment Example | Topics and Well Written Essays - 3500 words”, n.d.)
National Health Service Assignment Example | Topics and Well Written Essays - 3500 words. Retrieved from https://studentshare.org/health-sciences-medicine/1517619-national-health-service-assignment

Since then, the government is engaged in expanding the scope of health and social care policy as an attempt to become the best welfare state.
First published in 1942, Social Insurance and Allied service, which was widely known as Beveridge Report, was the work of Sir William Beveridge. The aim was to take the state towards the welfare state. In 1942, this influential report was completed and published.
He described various maladies such as disease, idleness, ignorance, squalor as the giant evils and proposed wide-spread reforms in each area (Beveridge, 1969). This report also became the basis for the scheme for free school meals and vaccination against diphtheria for the children who we...
7 Pages(1750 words)Assignment

The flexibility of these practices depends upon the assorted group of ethics, medicines, and law. The NHS UK Transplant reveals around 6,000 people in the country desperately looking forward to their turn for an organ transplant, especially kidney in the hope of their rehabilitation (“Organ Donation,” 2005a). Organ transplants principally entail kidney transplant, heart transplant, bowel transplant, and limb transplant. Statistics divulge around 2,375 patients witnessing cornea transplants along with 86 patients procuring pancreas in the UK in 2004-2005 (“Organ Donation,” 2005b). Crucial wakefulness for meeting the gargantuan need for this global crisis has been urgently called for. Commercial trade of huma...
15 Pages(3750 words)Assignment

... and the mortality rate as a result of cancer is 120,000. The high mortality rate makes cancer the second highest killer, after heart diseases. Thus cancer is a serious health issue in the United Kingdom. Keeping this in view the National Health Service made an assessment of the currently available interventions to deal with the health problem of cancer and has come out with its recommendations termed the National Health Service (NHS) cancer Plan 2000, with the objective of increasing the effectiveness of the interventions to deal with cancer, so that the citizens derive the maximum benefits from the healthcare system (The NHS Cancer Plan). Overview of the National Health Service (NHS) Cancer Plan (2000): The Cancer Plan 2000 commends...
11 Pages(2750 words)Assignment

However, apart from the general comments of Durkheim regarding the potential causes of suicide, the researcher proceeds to an extensive analysis of suicide as a sociocultural phenomenon. In this context, according to Durkheim, the main types of suicide are the following four (as they are presented in Figure 1 below): a) Anomic suicide, b) Fatalistic suicide, c) Altruistic suicide and d) Egoistic suicide. The above 4 types of suicide refer to different social conditions. More specifically, the Anomic suicide is linked with ‘the moral dimension anomie which occurs when there is an imbalance of means and needs, a de-regulation in peoples’ lives, a loss of moral certainty, a loss of control or a loss of group support&rsquo...
6 Pages(1500 words)Assignment

Continued physical activities have been demonstrated through medical research to possess massive benefits to people as it assists in the attainment healthy cardio and the elimination of health threats associated with lifestyles. Mental health is the normal state of the mind which facilitates normal thinking and reasoning irrespective of the normal life pressures. Several factors influence the mental health of an individual including consistent physical activity and exercise. In this paper, the impacts of physical exercise on mental health and overall wellbeing will be examined (Dunn, Trivedi & O’Neal, 2001).
In the recent past, the relationship between increased physical activity and the mental health of individuals...
10 Pages(2500 words)Assignment
sponsored ads
Save Your Time for More Important Things
Let us write or edit the assignment on your topic "National Health Service Assignment" with a personal 20% discount.
GRAB THE BEST PAPER

Let us find you another Assignment on topic National Health Service Assignment for FREE!