Comments (0)
Add to wishlistDelete from wishlist
Cite this document
Summary
Identify three examples of federal health legislation enacted since 1960 which had major impact on health policy in the United States. Failure of the United States to enact a national health insurance system is not synonymous with lack of national health care reform…
Download full paperFile format: .doc, available for editing
HIDE THIS PAPERGRAB THE BEST PAPER93.1% of users find it useful 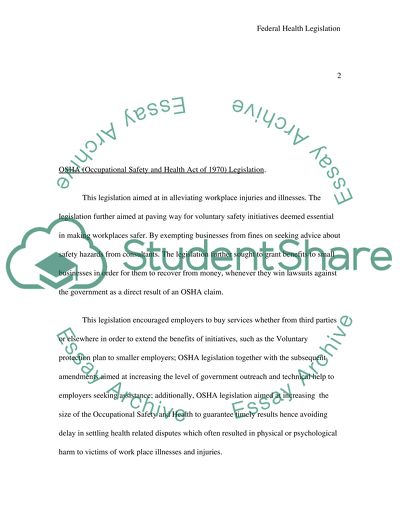 Download file to see previous pages By exempting businesses from fines on seeking advice about safety hazards from consultants. The legislation further sought to grant benefits to small businesses in order for them to recover from money, whenever they win lawsuits against the government as a direct result of an OSHA claim.
This legislation encouraged employers to buy services whether from third parties or elsewhere in order to extend the benefits of initiatives, such as the Voluntary protection plan to smaller employers; OSHA legislation together with the subsequent amendments aimed at increasing the level of government outreach and technical help to employers seeking assistance; additionally, OSHA legislation aimed at increasing the size of the Occupational Safety and Health to guarantee timely results hence avoiding delay in settling health related disputes which often resulted in physical or psychological harm to victims of work place illnesses and injuries.
The legislation also aimed at making OSHA an independent body so as to make it more efficient in service delivery. By doing so, the legislation further empowered inspectors by giving them the mandate and the responsibility of overseeing the safety of workers in the workplace. OSHA paved way for imposition fines to those employees who violate rules and procedures in the work place therefore making the implementation of work place safety a realistic goal for American workers.
The OSHA legislation, has been criticized for leaving to much freedom for private businesses which henceforth. Generally OSHA targets to attain safe and healthful working environment standards. Furthermore, the legislation paved way for the states to receive assistance from the federal government to support research, and other efforts geared towards occupational safety and health .
The OSHA legislation was necessitated by the need to respond to a saddening state of affairs whereby there has been reported a sharp increment in employee deaths and injuries, in the work places. Therefore this prompted legislation in order to halt the suffering and loss of lives as a result of preventable accidents. Particularly, OSHA sought to ensure safety and health of the working population in the US. This is contained in the Occupational Safety and Health Act of 1970.
As well as the above mentioned factors, high rates of workplace injuries, illnesses and deaths were noted as being major financial constraints to employees, whole families, employers, government, and society as a whole who in one way or the other had to shoulder the burden of any incidences associated with work place injuries.
Speaking in terms of financial burden resulting from work place incidences, every year, over one million days of work are in the USA lost as a direct result of workplace injuries. For instance, the year 1995, saw the loss of an estimated $120 billion due to work-related injuries in terms of lost wages and productivity a staggering $60.9 billion, was lost (Weissert, C, S & Weissert W, G. 2003).
What presents the greatest challenge to the government is the fact that the workforce illness and injuries touches on the common on workers which means that the issue unless handled well can have far reaching consequences to the political party in power. It is against such a back ground that, the issue ...Download file to see next pagesRead More
Share:
Cite this document
(“Federal Health Legislation Essay Example | Topics and Well Written Essays - 1500 words”, n.d.)
Federal Health Legislation Essay Example | Topics and Well Written Essays - 1500 words. Retrieved from https://studentshare.org/health-sciences-medicine/1511335-federal-health-legislation

Worse, because the family sometimes cannot afford to cover their medical expenses, these mentally ill patients end up with no medical care at all; they are forced to suffer the debilitating symptoms of their mental illness and to be subjected to worsening mental and general health conditions.
This paper shall discuss the lack of insurance among mentally ill patients. It shall first describe the mental health issue and the student’s position on such an issue. This paper shall also explain why this position is important and the relevance of the position to nursing practice, the mentally ill, and society. The rationale of this position shall be clearly explained and two factors that contribute to this issue shall be identi...
8 Pages(2000 words)Assignment
sponsored ads
Save Your Time for More Important Things
Let us write or edit the essay on your topic "Federal Health Legislation" with a personal 20% discount.
GRAB THE BEST PAPER

Let us find you another Essay on topic Federal Health Legislation for FREE!